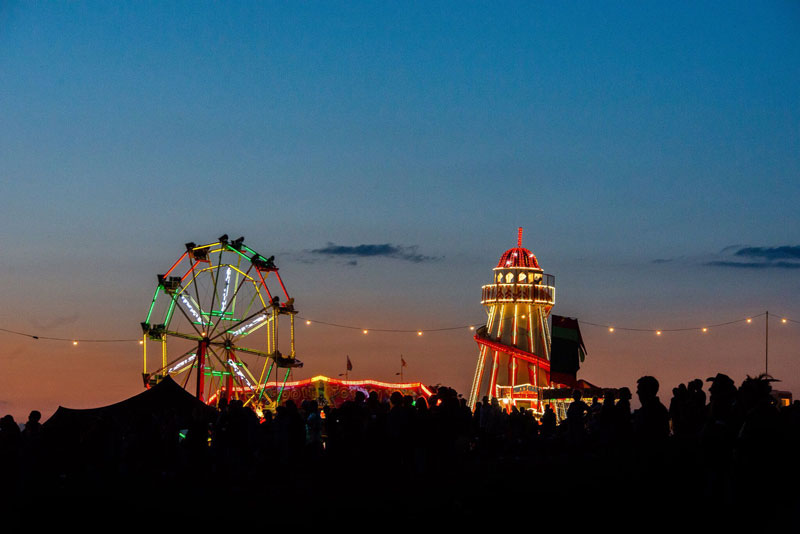 Travis, Clean Bandit, Faithless (DJ set), Roni Size with Dynamite MC, Kosheen and The Craig Charles Funk and Soul Club will headline. Valley Fest has joined forces with Arcadia, the performance art collective. Arcadia are best known for their iconic, 50 ft fire-spitting spider at Glastonbury.  However at Valley Fest, they are bringing the Afterburner stage – built from a Rolls Royce jet engine.

Due to popular demand, festival favourites MY BABY will be back for the third time. The Lake Stage will also host Judge Jules (live) for some Ibiza classics and Sports Team will bring their own brand of raucous, electrifying chaos.

Valley Fest has always showcased a huge range of Bristol talent and this year is no different. Dizreali, Dr Meaker, Doreen Doreen, Mr Bruce, Pete Josef, Nuala Honan, Smerins Anti-Social Club and Afon Sistema are all on the line up. Pompadour, a young band selected through the new application process, are ones to watch, plus the drummer is from Chew Valley.

But it’s not a South West stitch up, hailing from Manchester, hip-hop producers The Mouse Outfit are on the bill as is the musical firebrand K.O.G (Kweku of Ghana), who will bring his full creative force to the Yard Stage.

Dolly Parton costumes at the ready! Valley Fest, now in its eighth year, has developed much support for its fancy-dress theme. This is inspired by the tribute act which, for 2022, is The Dolly Show. Shewill play on Sunday, ahead of the competition, which in 2021 was fierce, with joint winners being picked.

From feasts, cooking demonstrations and Sunday sampling sessions, the Valley Fest programme has everything a food lover could want. It caters for all tastes and budgets, with added theatre and fire, and has quality and regeneration at its heart.

Friday night sees a five-course feast headed up by Rob Howell of Root – a Bib Gourmand winner and Pegs Quinn of Sonny Stores. Expect plant-based small plates with meat on the side.

Saturday Saturday’s session will also have a five-courses headed up by Josh Eggleton. Prepare for sexy seafood galore. And Sunday’s menu will be a three course regeneratively-raised roast prepared by Josh Eggleton, Toby Gritten of the Pump House and Hannah Catley of Lockdown Loaves. All championing the finest produce the South West has to offer.

The sizzling and smoking hot line up includes Pete Sanchez: of Michelin-starred Casamia, Paco Tapas, Decimo London, who will be joining forces with George Livesey: Bulrush, Henry Eldon, Elliott Lidstone: Box-E, BBQ Champion, Simon Dyer and others for a special three day extravaganza. A must-see for anyone who is passionate about BBQ smoked food.

The family friendly festival has a brand new area a – a place where everyone can play. It’s a box-fresh collaboration between Arcadia and The Woodland Tribe.  By day, kids will build their own stage from reclaimed materials. The baton passes at nightfall as the Afterburner stage fires up and it’s playtime for the adults.

Valley Fest will be the first-ever festival to showcase all things regenerative – from food, farming, gardening, beauty and drinks.  Never before has a music and food festival highlighted this approach in such a big way.

The event has always supported organic and local food. But this year, it’s going a step further and spotlighting the crucial role soil plays in addressing climate change and producing healthy food.

The programme for Regen Area, sponsored by Yeo Valley, is packed with debates, talks and workshops from some of the leaders in the field. Inspiring speakers will explain how we can heal a broken system, repair a damaged planet and empower farmers and people to eat their way to a better future, through regenerative organic farming. This is for those hungry for hope.

Expect food, drink, skincare, fresh produce from pioneering brands, farmers and producers. Not only that, there will be quizzes dancing and comedy.  The programme has been carefully curated so that it caters for everyone – including food lovers, activists, gardeners, parents or farmers and children.

From sacred sound to yoga flow, massage to meditation, reiki to reflexology this brand new area has it all. Festival goers can take a break from the festival, indulge in spa treatments, healthy foods and drinks, and reconnect through the practice of yoga, meditation and other healing activities.

“I’m so excited about 2022. From pioneers, luminaries and rising stars, it’s the most diverse lineup we’ve ever seen. I can’t wait for everyone to GET ON MY LAND!”

Expect hedge-to-hedge Somerset sparkle and plenty of nonsense with a spectacular soundtrack and magnificent menu | Tickets are £170 (plus booking fee) available from valleyfest.co.uk

Next
Future Fighters: in conversation with Bristol-based aerospace company, Leonardo