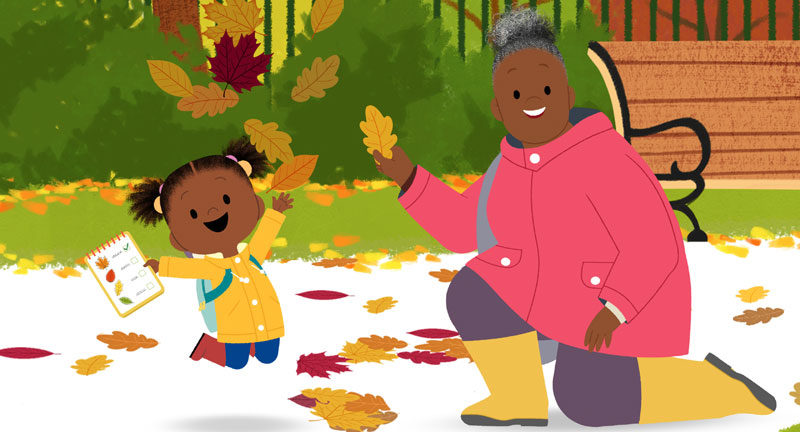 A local independent animation studio has scooped a British TV industry award for its efforts in producing the first UK pre-school animation centring around a Black British family. Millie Bruce-Watt catches up with the creators

The Bristol studio, A Productions, together with BBC Children’s In-House Productions, recently impressed in the best pre-school programme category at the Broadcast Awards – which celebrates the very best in British TV programming – and won.

JoJo And Gran Gran: It’s Time To Go To The Hairdresser’s – the 11-minute episode that got them the gong – was written by comedian Nathan Caton, who has appeared on some of the nation’s much-loved comedy shows including Live At The Apollo, Mock The Week and Russell Howard’s Good News, to name just a few. The A Productions series, which has broken new ground in pre-school programming, first aired on 6 March 2020 and has already been picked up by global networks and commissioned for a second and third series, set to hit our screens in 2022.

The series is based on the semi-autobiographical picture books JoJo and Gran Gran: All In A Week and JoJo and Gran Gran: Twelve and Half Days to Christmas by international early years author, speaker and associate producer of the series, Laura Henry-Allain MBE. Laura was inspired by her close relationship with her Saint Lucian-born grandmother, who moved to London as part of the Windrush generation. The character JoJo is a nod to Laura’s middle name, Josephine, and she wove her own heritage, lifestyle and upbringing into the characters.

Behind the successful series was a team of over 100 creative minds working tirelessly to make all 44 episodes the very best they could be. We sought out A Productions’ joint managing director Katherine McQueen for the inside track on their top TV twosome and chatted to author Laura about her next ground-breaking creation.

A Productions helped produce the animated segments
KM: For people not familiar with the show, JoJo is a curious five year old who loves her grandma, Gran Gran. While her mum and dad are at work, Gran Gran looks after JoJo and always has an exciting activity planned for their day together. The series was created by BBC Children’s In-House Productions in Salford; we are proud to produce the animated segments of the show in collaboration with them.

The team used Toonboom to create a picture-book look
KM: The BBC in-house team wanted to create a painterly textured look for the series and we were fortunate that they were able to provide us with concept art and photo boards to inspire our team. Our aim was to have it look and feel like a moving children’s picture book. We used a software called Toonboom, which allows us to keep the painterly textures of an illustration while allowing it to be animated.

Each episode took half a year to produce
KM: Our part of the process takes around six months, from receiving a script from the BBC to delivering the finished animation back to them for post production – we do work on many episodes all at the same time. Animation has many, many stages and it’s certainly not a quick process but the final product is worth the long wait!

The background characters all have stories of their own
KM: Eagle-eyed viewers on the first series will have spotted a pregnant couple at the start of the series and by episode 44 they had their baby. The hope is to expand the background character stories even more in the next two series, so keep an eye on which relationships unfold.

It is the first UK pre-school animation centred around a Black British family
KM: As such, making sure that the show had an authentic voice was key. The BBC wanted us to ensure accurate cultural representation and we are proud this has resonated with the audience. The feedback we have had from people has included how excited they are to see ‘hair like ours’ and JoJo wearing her sleeping hair bonnet.

A cultural panel ensured the animation remained authentic
KM: On the first series, there was a cultural panel made up of people from the broader Afro-Caribbean community. The panel fed back on scripts, storylines, set design and cultural references. You can see their input in everything from the artwork displayed in Gran Gran’s hallway to the hot pepper sauce on her kitchen worktop. Laura Henry-Allain MBE’s relationship with her grandmother was the inspiration behind the two central characters and Laura worked with the BBC as a consultant on the series.

A Productions were also the animators behind the Tweenies
KM: We have been involved with so many great shows over the last 30-odd years but we are really proud of the work we did on the Tweenies, which feels a million years ago now, and more recently we produced Sesame Street’s first ever animated special for HBO Max.

The series tackles real-life issues
KM: JoJo and Gran Gran is a beautiful animated series that is rich in detail and multi-layered in its approach towards handling universal themes of diversity, multi-generational relationships, life cycles and the passing of time.

The animation has been signed on for two more series
KM: There are two new series in the pipeline which we will be working on – they also include some very exciting double episodes! I can’t give anything away about what happens, but in true JoJo style I think the viewers will really enjoy them.

Watch series one of JoJo and Gran Gran on BBC iPlayer: bbc.co.uk/iplayer

From the creator: Laura Henry-Allain MBE

“The series was everything I imagined. The CBeebies team and A Productions took on everything I was saying about my grandmother – her love for the community and how she loved all her grandchildren. Everything about her is woven into Gran Gran. The first time I saw an episode I burst into tears because I thought if my gran were here to see this, she would be super delighted.

“It’s great that JoJo and Gran Gran is recognised as the first animation that features a Black British family and I hope that there will be other shows that feature Black characters in the future – I hope it becomes the norm. I feel that is so important that we don’t only have JoJo and Gran Gran but that we see diversity in animation and live action. One of the things that I am passionate about is making sure we have diversity woven all the way through children’s media and we think more about how we feature disability, the Gypsy, Roma and Traveller communities and LGBTQ+ issues for example.

“I have recently written a new children’s book called My Skin, Your Skin. It is a powerful book to help children and adults have meaningful discussions about race and anti-racism. The book empowers children to be the best versions of themselves; to have self-love, self-esteem and self-worth, irrespective of their skin colour. Following recent events, I believe this is a well-needed book right now.”

My Skin, Your Skin by Laura Henry-Allain, illustrated by Onyinye Iwu, will be published on 7 October; £9.99 (available to pre-order); laurahenryallain.com

Next
Chris Yeo: 1966 and all that
Start typing to see results or hit ESC to close
bristol gender film tv history
See all results