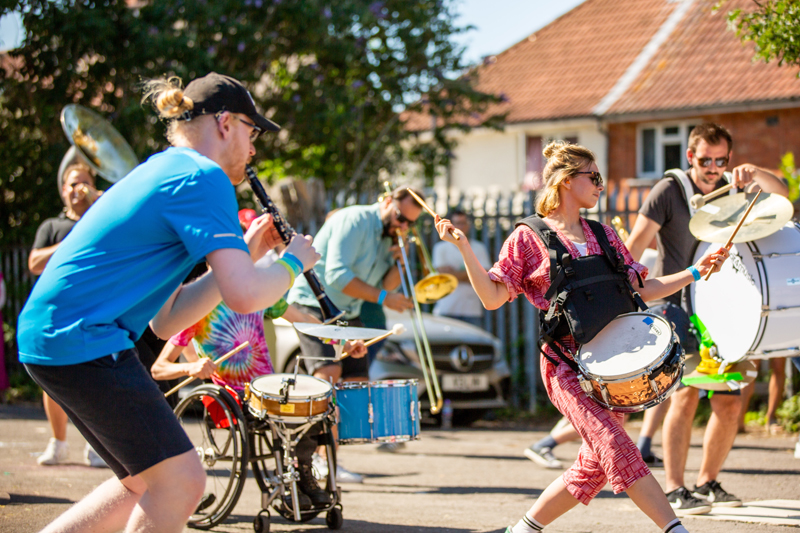 A dollop of love: Paraorchestra hits the streets of Knowle West

Bristol is home to Paraorchestra – the world’s only large-scale orchestra of professional disabled and non-disabled musicians. As they gear up for their biggest commission to date, Millie Bruce-Watt chats to multi award-winning conductor and artistic director Charles Hazlewood

A bright shining light in the music industry today is, without a doubt, Paraorchestra – the world’s only integrated orchestra of professional disabled and non-disabled musicians. Founded in 2012 by award-winning international conductor and musical revolutionary Charles Hazlewood, the Paraorchestra made its debut performance at the Paralympics’ closing ceremony in London. As the world’s eyes watched an orchestra of 18 world-class musicians play alongside Coldplay, a dream was born, a ripple of hope was sent across the world and a powerful message played out – music is a birthright not a luxury.

Almost a decade later and the Paraorchestra has grown into a 90-piece ensemble with around 40 musicians identifying as disabled. From Glastonbury Festival to Carlyon Bay, the orchestra has been spreading the word, encouraging musicians to stand up and be counted. They are undeniably a shining example of the joy and the brilliance that emerges when positive change is achieved.

This year, the Paraorchestra is bringing its biggest commission to date to the streets of Knowle West. Described as sonic street food, SMOOSH! will see a core of 20 musicians from the Paraorchestra ensemble join 50 community wind and brass players and a troop of dancers performing tub-thumping karaoke tunes on the move. As rehearsals kicked off, we caught up with the conductor, who told us all about the ‘smooshability’ of their mobile ‘masseoke’; why he’s decided to work exclusively with the Paraorchestra; and the exciting plans that lie in wait.

“One of the trademark aspects of the wonderful Paraorchestra is that we pride ourselves on working in so many different contexts and in so many different kinds of styles of music and approach and nature of show,” says Hazlewood. “This is an interesting one in that we’re asking our very large ensemble of musicians to be like a giant mobile human jukebox. It’s bringing hopefully a great big dollop of love to the streets of Knowle West. It’s not often that you get world-class wind, brass and percussion players and a giant crazy band banging out Kate Bush, Adele, Basement Jaxx and all this music that’s in our bloodstreams. After the year that we’ve all had, I really hope it will bring people out to their front gardens with that sense of celebration of joy, the joy of humanity in one great big outpouring.”

The ensemble will start at Filwood Community centre on 17 September and make its way through the suburban streets, inviting everyone and anyone to join the celebrations.

But what does SMOOSH! mean? “I love looking at the etymology of strange words and I have for a long time known about the word smoosh,” Hazlewood says with a laugh. “It’s basically American English and it’s got two meanings which sort of relate to each other. The first meaning… if you cook a cauliflower and you cook it really thoroughly so it’s really soft and then you want to mash in some grated cheese the process of smashing in some grated cheese is called smooshing. The second meaning… if you see a little kitten that’s freaking adorable and you just want to cuddle it, you want to smoosh it. It’s such a tactile word and hopefully the production is just a glorious great big smoosh, which should open up Knowle West and its smooshability.”

The journey
In his 30-year career, Hazlewood has conducted some of the greatest in the classical repertoire with some of the best orchestras in the world. He’s been a significant presence on British television and radio for decades and his innovations continue to attract new audiences to orchestral music as he reimagines what an orchestra is. The Paraorchestra, however, is clearly held in a special place in his heart. Hazlewood talks with such passion, speed and spirit that it’s not hard to be carried along with him. His mission is clear and concise – he wants to bring the ever-more modern joy of orchestral music to the 21st century audience and, in doing so, change lives and communities for the better.

“Paraorchestra is the only orchestra in the world that is a reflection of modern society. The starting point came for it when my youngest daughter was born with cerebral palsy. Very quickly it got me thinking, I’ve had a 30-year career conducting orchestras around the world and I can count on the fingers of one hand the number of musicians who are disabled that I’ve encountered – it’s absurd, you can’t tell me that there aren’t millions of prodigiously gifted musicians who happen to identify as disabled.

“Where is their platform? Where is their voice? It’s not just that – of course it’s about equity – but it’s also about not missing out on talent. At the moment, we’re missing out on millions of talented people because we haven’t got a system in place which allows them to take part.”

Hazlewood has carved a reputation as quite the maverick when it comes to mixing musical genres – pushing the creative boundaries in every way possible, to serve as a template for generations of forward-thinking artists, and inspiring elation. “The orchestral industry, as it currently is, is very much about the custodians of a tradition – and there’s nothing wrong with that – we all need our Brahms and our Beethoven – but at the same time there needs to be more forward thinking and forward moving. You show me any other kind of aspect of human experience that hasn’t continued to evolve with current technologies, and why would you want to miss out on the wonder of analogue synthesisers or digital instruments? It makes no sense.

“The orchestra is alive and well in everyone’s living rooms if you think about it – all video games invariably have big orchestral backing, and all those movie scores. It’s just that people having a live experience of it is rare and there aren’t that many, perhaps – if you look at the population as whole – that will darken the door of the Royal Festival Hall and that’s a shame. We really hope we can bring about change.”

Sky Arts ambassador
In January of this year, Hazlewood became Sky Arts’ ambassador for music – one of five ambassadors appointed – which now marks Paraorchestra as the channel’s flagship orchestra. As part of this, Sky Arts will invest £60,000 over two years into the musicians. This has created a musicians-in-residence scheme that, under Hazlewood’s support and mentoring, enables Paraorchestra to cultivate some of the extraordinary D/deaf and disabled talent within the ensemble.

“Sky Arts are doing what they can out in the communities, catalysing change and inspiration and fresh possibilities so it seemed like a natural fit for me to take on an ambassadorial role, taking Paraorchestra with me. It will also give us an opportunity to reach out to people who may never come to one of our gigs.

“We have three musicians who are the first of this year’s musicians in residence and they are doing all kinds of things like taking the viola into the world of drum and bass, learning how to compose a film, learning how to produce, learning how to orchestrate – it’s all about the ecogology within the orchestra of growing talent. We are already benefiting from it but seeing it grow exponentially and perhaps in unexpected directions. Sky Arts has helped us and made it possible for us to do that so that’s wonderful.”

Paraorchestra is always on the look-out for emerging talent and it is of utmost importance to support those joining the family. “Every 18 months to two years we do a musicians call-out, which is specifically for musicians who identify as disabled. Our most recent call gave us 12 new musicians so each time we’re adding more to our flock.”

A year of recalibration
As the pandemic ground us all to a halt, Hazlewood saw it as an opportunity to look inwards and identify the ways in which the orchestra could better support its musicians. Having said goodbye to his international production company and the orchestras he’s worked with for 30 years, he is now dedicating his full time and commitment to the Paraorchestra, he says.

“Lockdown has been an opportunity for us to pause and really think about the ecology of our orchestra. The music industry is a tough one; it can be brutal. We don’t want to be another replicant of that model, we want to create something that is much more holistic – family-based – where we listen to each other and support each other in every way that we can.

“Our number one mantra at Paraorchestra is “if the only purpose to life is joy, then anything is possible” – very simple but very helpful.

The best city in the world
Hazlewood credits Bristol as part of Paraorchestra’s success, naming it his favourite city on the planet. “Everything changed for us when we moved to Bristol. It’s a special vibe and we really love our Bristol audience, they have taken us to their hearts. This is the first time we’re playing in Knowle West and we can’t wait to get there. They’ve welcomed us with such wonderfully wide open arms, which has meant a huge amount to us.

“The wonderful Bristol Beacon, which we’re doing this show with, is also doing so much great work with another initiative called OpenUp Music, helping to level the playing field and create training and opportunity for young artists who identify as disabled. Bristol has become the hotspot for this work more than any other city in this country or, indeed, anywhere in the world.”

Look out for Paraorchestra’s lockdown project Death Songbook on Sky Arts, coming soon, as well as the 21st Century Orchestra, a new Sky Arts series that the ensemble will soon begin filming for. “It will look at all the innovations that we have discovered are possible in terms of placing an orchestra front and centre, in real people’s lives, normal people’s lives, every person’s life,” says Hazlewood.