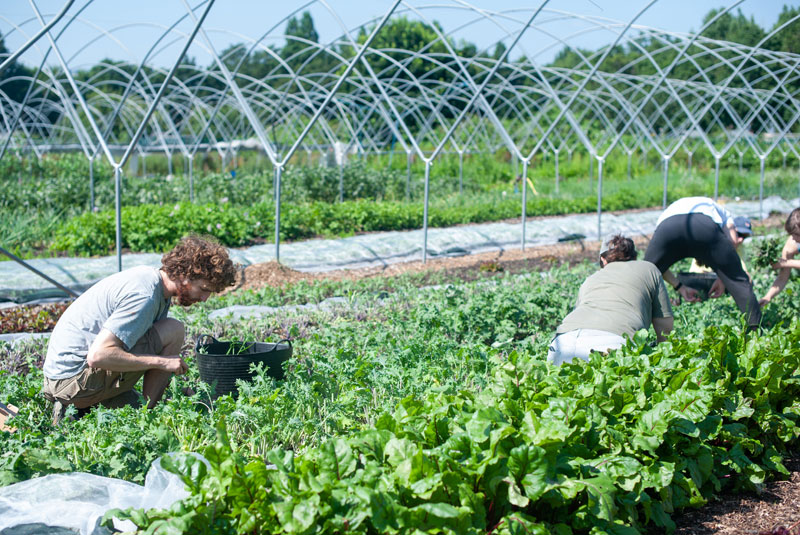 The 21st century has seen the resurrection of gleaning – the age-old practice of harvesting unwanted crops to help those most in need. We speak to the founder of the Avon Gleaning Network, Nick Haigh, who, along with hundreds of local volunteers, has collected almost 12 tonnes of surplus fruit and vegetables that would otherwise have gone to waste…

Gleaning: the act of collecting leftover crops from farmers’ fields after they have been commercially harvested or from land where it is not economically profitable to harvest. Under the blazing sun or cool grey skies, volunteers around the country have been rescuing tonnes of surplus food from their local farms, redistributing them to local food banks and charitable projects. Their aim: to help reduce food waste and alleviate food insecurity in the UK.

Research from UK campaign group Feedback, which works to regenerate nature by transforming the food system, found that up to 16% of a farmer’s crop is wasted before it has even left the field, with much more never being harvested at all. Although this is often due to a range of factors that are beyond a farmer’s control – such as produce not being the right shape or size for supermarkets, or even inaccurate forecasting by retailers on how much produce they will buy, leaving farmers with excess crop that can’t be harvested without losing money – billions of meals go to waste each year.

The practice of agricultural gleaning is an ancient one. Historical records show that it has been in existence for at least 4,000 years. The Old Testament commanded Hebrew farmers to leave a portion of their crops un-harvested and allow neighbours to pick what was left for themselves and their families. Gleaning came to an end in the late 18th century when a court case ruled in favour of private property rights and landowners began to restrict access to fields. Today, however, as 9.5 million tonnes of food are thrown away in a single year and 7 million people struggle to afford to eat, it is clear that gleaning is needed as much as it ever was.

With that in mind, Feedback launched its Gleaning Network project in 2012. Seven years later, after working with 60 farmers, 3,000 volunteers and numerous charities to salvage over 500 tonnes of food, Feedback began to train community groups across the country to run gleaning activities in their local area. The campaign group initially supported the newly-formed networks with a £2,000 grant, which allowed over 20 teams to evolve into well-oiled machines.

As Bristolians, we are grateful for our local group – the Avon Gleaning Network (previously the Bristol Gleaning Network), which was founded by Nick Haigh in September 2020. The Bristol group has grown from a team of one to a team of 300. Together, with over 700 hours of volunteer time, the Avon Gleaning Network has saved nearly 12 tonnes of food from 16 farms across the Avon and Somerset region. Some 28 charitable food projects, including Fareshare, Stokes Croft Food Project and Secret Soup Society, have received fresh produce that would have otherwise gone to waste.

“I started on a community farm in Chew Magna,” Nick tells us. “Filling my car up with 200 kilos of swede and trying to find a home for it. I began to get friends out in the field with me and then eventually we started getting the word out. We are now beyond Bristol and distribute to food projects and community kitchens who put together food parcels for people in the local area.”

Feedback’s gleaning network has not only helped tackle issues of food waste in the UK but it has given volunteers the opportunity to engage with the food system hands-on. “I wanted to enable people to take environmental action on a human scale – and now, getting people out onto the land, connecting with each other and where our food comes from has become a huge part of what we do. I find being out on farms, among vegetables and great people really wholesome. I’m passionate about food and creating a better food system and it’s amazing to see so many people joining us and supporting us on our journey.”

Although the Avon Gleaning Network continues to grow from strength to strength, it relies heavily on volunteers to help drive the gleaning campaign into a national movement. “We’re calling out for more coordinators and volunteers to help build on the work of our members,” says Nick. “We’re also looking to connect with more local growers in the Avon and Somerset area to help save tonnes of food from going to waste.”

Ultimately, this ancient tradition has transformed into a dynamic opportunity to tackle food waste and security in our communities – its potential is vast.

Always on the lookout for new ways to tackle excessive food waste in the local area, the Avon Gleaning Network is also expanding its services to work on allotments in Bristol. The team are keen to partner up with anyone who has an allotment and is able to invite gleaners to pick up the surplus veggies. Get in touch at: avongleaning.org.uk. Follow Avon Gleaning Network on Instagram, Twitter and Facebook: @avongleaning