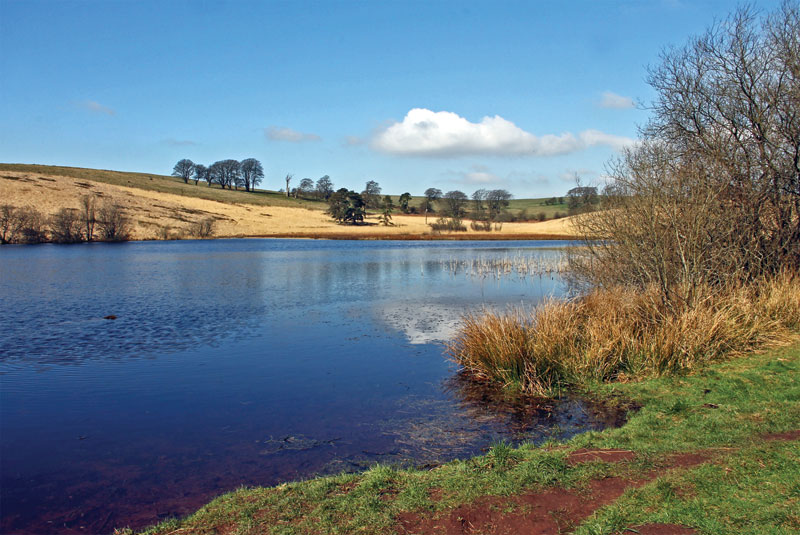 “Whether you come in search of industrial archaeology or of flora and fauna – or simply of great views – there can be few sites which are so unlikely to disappoint”, says Andrew Swift. Here, he delves into the fascinating history of Priddy Pools – a geological Site of Special Scientific Interest in the Mendip Hills…

One reason the Romans were keen to invade Britain in AD 43 was so that they could get their hands on its mineral deposits. Lead, in particular, was highly prized. The Romans used lead for making water pipes and cisterns, lining baths and aqueducts, and, less advisedly, making cooking and storage vessels. Even more alarmingly, they used it to produce lead acetate, with which they sweetened food and wine.

Almost as soon as the Romans arrived in Britain, the Second Legion was ordered westward to establish a fort on Mendip, where lead was abundant. Lead had been mined here on a small scale for centuries, possibly since the late Bronze Age, but the Romans swiftly ramped up production. They established a town, which grew to be bigger than Roman Bath, with an amphitheatre to keep the workers entertained, and built roads to ports on the south coast and the Bristol Channel. The area covered by their mine workings extended over several miles, and lead ingots from Mendip were soon being sent to the farthest reaches of the empire.

When the Romans departed, over 350 years later, leaving vast mounds of slag behind, the industry collapsed as Britain entered the Dark Ages. By the 12th century, however, lead was being mined again, albeit on a far more modest scale. The area where lead was most plentiful was now controlled by four major landowners – the Lords of the Manors of Harptree, Chewton and Charterhouse and the Bishop of Bath and Wells. They issued licences to free miners, took 10% of the ore they dug from the ground and administered minery courts.

Most of the mining was small scale, with miners working alone or in partnership. A decent living could be made, though, by men prepared to put up with the hard and hazardous work, and the industry thrived. By the late 18th century, however, with seams near the surface worked out, it was in decline. Digging deeper would only have been possible if steam engines had been installed to pump out the water that would flood in. This, though, would have needed a major injection of capital, and none was forthcoming. Revival was, however, to come from an unexpected source.

The legacy of over two thousand years of mining was a slew of colossal slag heaps. In 1807, when some of them were assayed, they were found to have a high lead content. Mining technology had moved on and what earlier smelters had abandoned as worthless could now be profitably resmelted. And so, in the 1820s, two resmelting works were built – at Charterhouse and the old Chewton Minery near Priddy. Another was later set up at Smitham, above East Harptree. The most ambitious resmelting project, though, was at Priddy, on land formerly held by the Bishop of Bath and Wells.

In 1857, a Cornish mining engineer called Nicholas Ennor acquired the rights of the Priddy Minery and set about building a state-of-the-art resmelting works. Almost immediately, he ran into trouble. The nearby Chewton Works sabotaged the operation by robbing Ennor of the water he needed for resmelting. The courts eventually ordered the supply to be restored, but no sooner was Ennor’s operation up and running than the owners of Wookey Hole Mill sued him for polluting the water they used for making paper.

Faced with these setbacks, in 1862 Ennor sold his rights to the newly-formed St Cuthbert Lead Smelting Company, under the direction of the improbably named Horatio Nelson Hornblower. The prospectus boasted that the company had been established ‘for the purpose of working the rich deposits of Lead Ore and Slag occurring at the Priddy Minery … where an accumulation of lead-producing debris, estimated at 600,000 tons, has been discovered and which is calculated to contain at least £900,000 worth of that metal’. Shares were snapped up, five furnaces were built and over 40 men hired to work them, but only five years later the price of lead slumped and the company went into liquidation.

Several subsequent attempts were made to revive the works, most notably in 1897, when, in response to a rise in the price of lead, new equipment was purchased, electricity installed and a three-quarter-mile tramway built. In 1908, however, the price of lead tumbled again and the last of the Mendip leadworks was finally abandoned.

Today, the site of what was for over two millennia an industrial hub is managed as a nature reserve known as Priddy Pools, where, because of the high concentration of lead in the soil, rare plants and animals thrive. Its habitats range from open water and valley mire to swamp, tall fen and spoil heaps. On my most recent visit in late May, the ponds brimmed with newts and tadpoles, damselflies darted, warblers warbled in the reeds and butterfly spotters scoured the heath in search of fritillaries. At such a time, it is a magical place, but, on a misty autumn afternoon or a cheerless winter’s day when rain sweeps horizontally from the south-west, it assumes a less benign character. It is also as well to be aware that, although Priddy Pools is a great place for dogs, adders can also be found, so caution is needed.

A visit to Priddy Pools
As it lies far from bus routes, to get to Priddy Pools you need to drive or cycle. There is a large free car park at Stockhill Wood (BA5 3AS; ST 549513), on the Old Bristol Road four miles south of West Harptree. Although it may not be immediately apparent, the wood lies in the middle of the area once mined for lead. It was planted in the 1940s on ‘gruffy ground’, pockmarked by old workings, which gives its recesses a cavernous, enchanted air.

The pools which give the reserve its name lie on the other side of the road, where few trees grow. The largest of them, Waldegrave Pond, which lies a little way to to the north, was built in the mid-19th century as a reservoir for Chewton Works. A path runs round much of its perimeter, and the number of online views of it testify to its photogenic nature and range of flora and fauna.

Across the road from the car park, access to the reserve is along a level path built as a tramway around 1897 to carry slag and ore to the smelters. A raised area on the right, 300m along, marks the site of Chewton Works, abandoned in 1883. Photographs of its ruins show massive sheds and two tall chimneys, but today virtually nothing survives above ground.

After another 350m, you pass a leat on the right. This is the site of the medieval Fair Lady Well, which marked the boundary between Chewton Minery, owned by the Waldegrave Family, and the Priddy Minery, which belonged to the Bishop of Bath & Wells. Over to your left is Mineries Pool, built to supply St Cuthbert’s Works with the water which gave Nicholas Ennor such problems.

Standing here today, with nature in such abundance, it is hard to appreciate how contentious this stretch of water once was. Hard, too, to imagine the scene of devastation that surrounded it or the toxic fumes that blew on the Mendip breeze.

Beyond Mineries Pool, the track runs along an embankment to the site of St Cuthbert’s Works. Here again, there is no sign of the tall chimneys and furnaces that towered above the glittering slag heaps. If you stray off the track, however, you can find remnants – a broken-down wall here, the foundations of a structure there, with sinister-looking flues disappearing into the ground, and one surviving building, now a cavers’ hostel.

There is, though, much more to discover, and whether you come in search of industrial archaeology or of flora and fauna – or simply of great views – there can be few sites which are so unlikely to disappoint.

Finally, after all that fresh air, no visit to Priddy Pools is complete without calling in to one of the most unspoilt pubs in Britain – Hunter’s Lodge, three-quarters of a mile to the south, with photos of the old leadworks on its walls. It’s open from noon to 2.30pm Wednesday to Sunday; dogs are welcome, as are children (in the family room), but mobile phones aren’t and you can only pay in cash. And, if you’re puzzled by what looks like an oversized wishing well in the car park, it’s actually the entrance to a caving system. Welcome to Mendip!