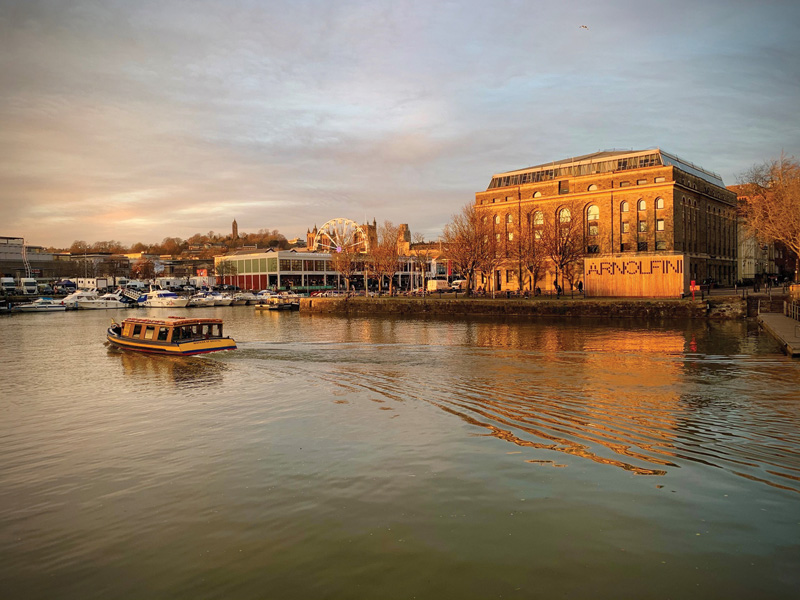 Set up in 1961 as a bookshop on Clifton Triangle, Arnolfini has grown from humble roots to become a pioneer of interdisciplinary contemporary arts, with an ambitious and eclectic programme of visual art, performance, dance, film and music. As the arts centre celebrates its 60th anniversary, Melissa Blease asks for past, present and future perspectives of this iconic institution

In 1961, Bristol artists Jeremy and Annabel Rees opened a tiny art gallery above a bookshop on the Clifton Triangle, naming it after Jeremy’s favourite painting The Arnolfini Wedding by Jan van Eyck and promising that the Arnolfini would ‘seek out challenging, controversial and sometimes relatively unknown, artists and provide a vital showcase for their work’. Having relocated to a formerly derelict 19th-century warehouse at the apex of Bristol’s harbourside in 1975 (taking in a couple of temporary homes along the way), the Arnolfini is today an ambitious, inspirational, internationally renowned pioneer of interdisciplinary contemporary arts that maintains an innovative, engaging programme of visual art, performance, dance, film and music curated to appeal to a broad audience of over half a million visitors each year. This year the gallery is celebrating its 60 year anniversary. We asked some of the key figures at the Arnolfini for their perpectives on what the gallery now represents, its history and development and its plans for the future.

“In some ways our remit remains very similar to the one that Jeremy Rees initiated in 1961: to create a place for the contemporary arts in Bristol and the South West that everyone can enjoy and feel they are part of. We also recognise that we have become a more established ‘institution’ over the years – a status that carries multiple responsibilities and opportunities.

Our ambition is to keep evolving as a centre that welcomes the best international contemporary arts to the city in parallel with our commitment to work closely with local communities and local talent. Our partnership with UWE Bristol puts talent development and community engagement firmly at the centre of our work, and we continue to develop our exhibition and cultural programming to embrace everything from the amazing creative work of our local communities to exhibitions, performances and events from some of the most high profile names in contemporary arts. We always want to show and share more art than we have space and resources for.

Since 1961, Arnolfini has shown the work of tens of thousands of the best contemporary artists from all over the world to tens of millions of people. Our programme has been cross-disciplinary since the start, including visual art, performance, music, literature, film, and craft, showcasing experimental works which have helped to redefine these mediums. Our talks, workshops and community-based activities have helped to facilitate deep engagement and debate.

Over the decades, Arnolfini has become a key hub in contemporary cultural networks, locally, nationally, and internationally. We continue, as we always have done, by wanting to make the best new art a positive part of people’s lives.”

When Arnolfini founders, Jeremy Rees (a graphic designer), Annabel Lawson and John Osborn (a painter) opened the doors to their bookshop on Clifton Triangle in 1961, more than 200 people crowded in to the simple, white-cube gallery to see the inaugural exhibition of paintings by Josef Herman and Peter Swan. None of the founders were older than 25, and they’d each contributed £100 to secure the lease to the space. It’s difficult to encapsulate Arnolfini’s long and varied 60- year history from that point as there have been so many incredible moments throughout; what you read here is just the tip of the iceberg.

In 1965, American Beat Poet Allen Ginsburg performed at the Clifton Triangle bookshop. In 1970, Arnolfini moved to Queen’s Square and established an extensive music programme, beginning with a concert of music by Michael Tippett with the composer in attendance, and in 1972 it was one of only three UK venues to host ‘phase and pulse’ music creator Steve Reich. In 1973 Arnolfini moved to the W-Shed on Bordeaux Quay, the extra space available allowing for a 106-seater cinema adding a new film strand to Arnolfini’s programme.

Bush House on the harbourside’s Narrow Quay became Arnolfini’s permanent home in 1975. The first annual Gay Film Festival (part of Bristol’s inaugural Gay Pride) was staged in 1977, and Arnolfini hosted a collaborative film screening and performance by Peter Greenaway and the Michael Nyman Band in 1979. In 1981, Arnolfini’s Video Art library opened and community activities expanded to include more workshops with schools and regular Saturday workshops for children; by 1983: Arnolfini’s visitor numbers exceeded 200,000 a year.

In 1985, Arnolfini curated the first exhibition of graffiti art in a mainstream UK gallery and the Lesbian and Gay Creativity event included a screening of The Times of Harvey Milk, in the middle of the darkest days of AIDs paranoia.

Having won the 1989 Turner Prize, Richard Long exhibited at the Arnolfini in 1990; Richard Wilson, Giuseppe Penone and Paula Rego – all three of the artists he had been shortlisted with – had all also recently shown at Arnolfini.

In 1992 Trophies of Empire – a collaboration between Arnolfini, Bluecoat Gallery, Liverpool and Hull Time-Based Arts – explored issues such as the Atlantic Slave Trade, Third World exploitation and the diaspora of black communities and in 1993, Disrupted Borders bought artists from across Europe, Asia and North America together to question Eurocentric ideas and assumptions.

In 1995, Patrick Heron’s Large Paintings and touring show Minky Manky (including Sarah Lucas, Tracey Emin and Damien Hirst) demonstrated the shifts that were taking place at that time, as the socalled ‘Young British Artists’ injected a bold – and at times, shocking – irreverence to the international art scene.

Between 2003 and 2005, a major renovation of Bush House allowed Arnolfini’s spaces to increase to include a double-height gallery on the first floor, flexible studio spaces and a study area on the second floor, and a new café bar designed with artist Bruce MacLean.

In 2017, Arnolfini enjoyed the phenomenal success of Grayson Perry’s The Most Popular Art Exhibition Ever! Galvanised by a new team in 2019 led by Executive Director Gary Topp, Arnolfini’s Arts

Council England funding was reinstated and the partnership with UWE Bristol, custodians of Bush House, strengthened as an integral part of Arnolfini’s success moving forward.

Today, Arnolfini remains at the heart of the community as an international centre of contemporary art, mindful of founding director Jeremy Rees’ principle to Enjoy Yourself.

Much more of Arnolfini’s history and archive can be found at arnolfini.org.uk and Bristol Archives; the team would also love to hear any Arnolfini memories you have to share via archive@arnolfini.org.uk.

“Not only are we looking forward to reopening our doors and sharing the final weeks of exhibitions A Picture of Health and Jo Spence: From Fairy Tales to Photo Therapy, but we’re also celebrating our 60th anniversary year with a programme that encompasses names known and new.

One of the many highlights is our summer exhibition Frank Bowling | Land of Many Waters, exploring the pioneering painter’s ongoing experimentation with material, colour and surface and featuring much of Bowling’s new and unseen work. This will be followed by acclaimed Bristol-born photographer Stephen Gill’s major retrospective in the autumn (part of Bristol’s very own Photo Festival) exploring the poetry in urban and rural landscapes.

Melissa Cheman exploring the histories of African and African diaspora artists at Arnolfini; and seeing the welcome return of the much loved BABE (Bristol Artists Book Event) with our partners UWE, this year entitled The Lost Weekend, bringing over 100 international artists’ work together online.

We’ll also be reinstating our second floor gallery and the ever-popular Reading Room, creating new spaces to explore and opportunities to engage with work from a host of our creative community partners, including projects developed during lockdown with creativeShiftCIC, Bristol Photo Festival and Fresh Arts. We’ll have creative workshops in our studios as part of our ongoing wellbeing work, and we’ll be transforming the light studio into a colour laboratory during Frank Bowling’s exhibition with fun and experimental workshops playing with colour, light and texture.”

“Arnolfini will open up again in a couple of stages, in accordance with government guidelines around Covid. The Harbourside Bar is scheduled to reopen with extended seating and a newly-installed canvas roof from 12 April. Arnolfini Bookshop is due to open from 15 April and we hope to reopen the galleries from 18 May.

While Arnolfini’s been closed, we’ve taken the opportunity toreconsider the foyer and public spaces. We’ve made improvements to signage to enable everyone coming into the building to navigate their way around more easily, and the team will be in a more visible space to greet and assist visitors. We’re also planning to introduce specially designed seating around the building, with an exclusive area for families in the coming months.

Visitors will also have the opportunity to explore Arnolfini’s history through a series of images and texts taking pride of place on the lift shaft that runs centrally through the four floors of the building. We are keen for Arnolfini to be a warm, inviting and safe space in which everyone feels welcome.”