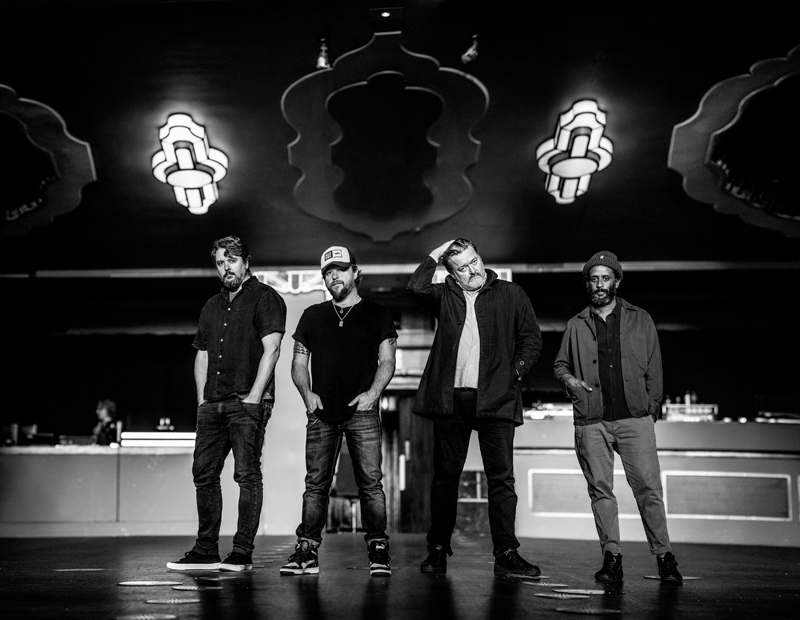 As Elbow prepare to headline the third night of Bristol Sounds on 24 June – returning to the harbourside for the first time since 2018 – Melissa Blease sits down with frontman Guy Garvey to talk early memories, meeting McCartney, performing with dear friends, and much, much more…

If you’re a thinking person, there’s a point in your life when you start realising that the way you are and who you are is a result of the people around you; like, you’re not on a journey to somewhere else: This Is Who You Are.”

If you’re Guy Garvey – lead singer of Elbow, longterm BBC Radio 6 Music presenter and all-round lovely person – it’s at that point that you write a song called Dear Friends, the final track on his band’s fifth studio album Build a Rocket Boys!, released in March 2011. And, if you’re one of the 350,000+ people who own that album, you know that the track is one of the most elegantly understated, beautiful tributes to friendship in the history
of songwriting.

But hang on: aren’t rock stars of Guy’s magnitude all about ego, narcissism and what wonderful things they do for other people rather than what wonderful things other people do for them?
“I’m a very, very lucky man,” he says, talking to me shortly before embarking on a tour that takes them to the Glastonbury Festival straight after their gig at the Lloyds Amphitheatre in Bristol on Friday 24 June. “I’ve really loved my life so far, and I’ve appreciated every second of that life.”

Guy’s much-appreciated life began in Bury in March 1974. The son of a newspaper proofreader father and a police officer (latterly a psychologist) mother, five elder Garvey girls preceded him and a younger brother Marcus (yup, Marcus Garvey the actor) completed the heptade. In what can only have been a rather, erm, rowdy household, was Guy encouraged to be creative – or is creativity vocational?

“Funnily enough, I’m kind of considering that question in depth myself at the moment because my son has just turned five-years-old and he’s definitely brilliant at drawing, and really quite advanced for his age,” says Guy. “My wife Rachael and I have encouraged him in all things, but he’s really taken to drawing – it’s as natural to him as whistling is for somebody else. So you do wonder where that comes from; which tendrils of Jack’s life, or the universe around him, led him to do that?”

I’m a very, very lucky man. I’ve really loved my life so far, and I’ve appreciated every second of that life…

Can Guy pinpoint what, at a young age, led him to do what he does today? “I think sometimes it can be one solitary incident that makes you want to do something, as kid,” he says. “When I was 11 or 12, my dad was a night shift worker, so music was limited to one hi-fi in the house that could only really be played between teatime and the earliest kid’s bedtime; a two-hour window for music, if you like. But when my older sisters and my father moved out, my mum bought my brother and I a boombox each – remember them? And my brother says he remembers me playing music on one tape deck and recording myself singing on the other one, and harmonising with myself. I don’t remember doing it, but he swears I used to do it. And I used to make radio programmes for my sister which I would call Eurolink, which was the old name for the channel tunnel. Yup, I used to make radio programmes for my sister, as a kid!

Given Guy’s illustrious career in his ‘second job’ as a BBC Radio 6 Music presenter, that doesn’t really come as a surprise.

“Cue another early days memory!”, he laughs. “When I was a kid, my dad built me an office at the back of the garage to encourage me to do more schoolwork, because I was always behind; in a working-class family with seven kids – you can imagine! My sisters were like, what the fk? But anyway, instead of doing my homework in there, I’d listen to Janice Long on the radio, and then through Janice Long I found John Peel, and then through John Peel I found my musical tastes. So to be part of that today, with the radio shows, is an amazing thing, I really love it – and I’ve got my little kiddie office space to thank for that.” Was that when the songwriting kicked in too? “I remember starting a short story when I was like, 13, and realising that I didn’t have the patience for entire stories,” Guy recalls. “The writing was kind of there, but I didn’t really appreciate it, or practise it. But then I joined a band (which I only did at first to show off, as it happens), and then the writing became the most fun part, for me, of being in a band. To this day, I still find it the most fun part of what I do. I have to work hard at it, but you can sometimes stumble upon a phrase which you know in your heart is borne of your own truth and it can make you cry. You’ve not arrived there by persisting; it just falls off your tongue while you’re singing, and you realise that’s what you wanted to say. These days, my songs are often led by nostalgia, or Jack, or Rachael – or the band, as a collective, collaborative experience.” Ah yes: the band. It’s so easy, talking to Guy, to go off on all kinds of wonderful tangents; during our chat, for example, I made a decision to pour myself a huge glass of red wine and go and listen to Talk Talk in the bath… at Guy’s insistence. But really, we were chatting for one reason, and one reason only: “Elbow? Ah yes, them!” he laughs. Erm… start with the highlights, perhaps? “Easy! Before we took to the Glastonbury stage in 2011 – or maybe 2013? It’s all a bit of a blur these days. But anyway, the DJ very cheekily started playing Hey Jude, which shares a chord progression with our most famous song. We were like, cheeky b***d, what a low blow! But the crowd started singing One Day Like This over Hey Jude; in that moment, looking at each other and listening to however many hundred thousand people doing that – it was the best gig of our lives.”

There are two sides to Elbow’s music: the introverted, quiet, patient side, stories from our past, stories about childhood… And then there’s the music that we play when we’re all together in a field – or in an amphitheatre in Bristol. I genuinely love it all, every moment…

Blimey! What does Guy think Lennon and McCartney would have made of it? “Well I reckon Paul’s still a bit of a jouster – he’d have had a laugh about it. But talking of Paul: I’ve still not met him, and I’d love to meet him, but he sent us an email once. He said he was dropping off one of his grandkids at school and he heard a song called Magnificent (She Says) on the radio, and he had to stay in the car until it finished ‘cos he wanted to know who it was by – he loved it so much. His email just arrived, out of the blue, to that effect – isn’t that lovely? It felt like such a genuine, off-the-cuff gesture. As the universe would have it, a couple of months later I was stood next to Stella McCartney in Glastonbury, and I told her what he’d done. And she said, ‘I love my dad, he’s such a nice man!’. And I thought, yeah, he is. And he’ll always be one of my heroes – all of them, all of The Beatles; they all are.”

Guy: can Elbow be on your own heroes list? “Ha ha! In one way, I guess we are – I love us! We’re just a group of old friends who couldn’t sing or play when we met each other but 30 years on, we’ve lived off music ever since and we’re still getting to do what we do with the people we originally did it with. Elbow are all gentlemen; they’re all kind men, and we all really put a lot of stock in our oldest friendships. We’ve seen the world together, met most of our heroes together and become very well known for our music, which we love making. We’re back onto that song Dear Friends again, when I managed to encapsulate how important our friends are to us – it was their encouragement in the first place, supporting us when first played in a pub in Bury, that made Elbow who we are today, and that’s not lost on me. But there are two sides to Elbow’s music: the introverted, quiet, patient side, stories from our past, stories about childhood – particularly with our last record. And then there’s the music that we play when we’re all together in a field, or all together having a laugh – or in an amphitheatre in Bristol. I genuinely love it all, every moment. As I said earlier, I’m a very, very lucky man.”

Bristol’s much-loved open air series of concerts returns with an eclectic line-up of must-see artists including headliners Noel Gallagher’s High-Flying Birds on 22 June, Paolo Nutini on 23 June, Elbow on 24 June, electronic duo, Jungle, will guarantee a dynamic dancefloor set on 25 June and First Aid Kit will headline their biggest ever South West show on the Sunday. War on Drugs headline the final day of the event on 27 June. In the incredible setting of Lloyds Amphitheatre, Bristol Sounds will bring five huge shows to the heart of Bristol. Musically the event caters to different genres including electronic, indie-rock, pop and heritage. Find out more at: seetickets.com