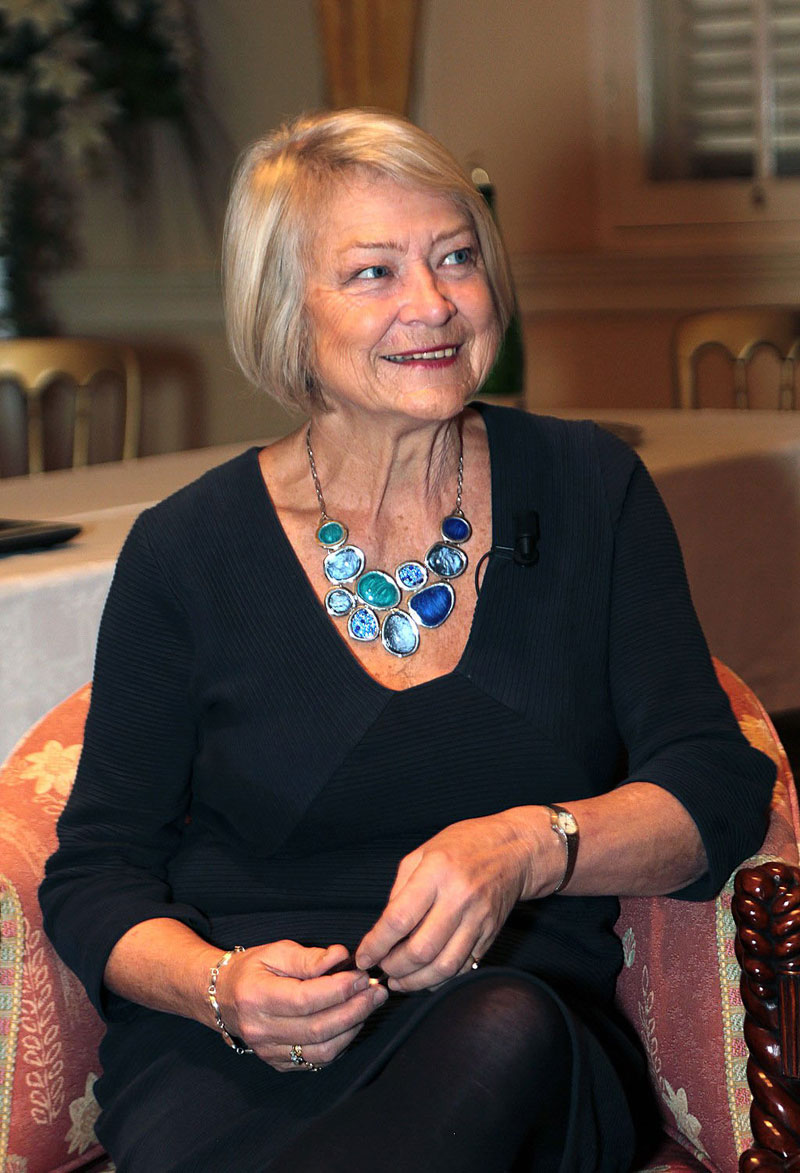 Filing from the field: an interview with Kate Adie

Kate Adie CBE is one of the most respected figures in broadcast journalism. After spending time at BBC Radio Bristol in her early career, she is returning to the city to speak at Clifton Literary Festival on 12 November.
We sat down with the veteran war reporter ahead of her appearance…

Well known for her role as the BBC’s Chief News Correspondent, Kate Adie is often described as one of the greatest reporters of our time, her name synonymous with the BBC’s war coverage between 1980 and 2003. As one of the first British women to report from the frontlines, Adie covered conflicts from China to Libya, Kuwait to Afghanistan and sent despatches from both Gulf Wars, the protests in Beijing’s Tiananmen Square, the Rwandan genocide and the war in Sierra Leone. In 2018, she received a CBE in the Queen’s Birthday Honours list and was awarded the BAFTA Fellowship, the highest honour BAFTA can bestow, in recognition of an outstanding and exceptional contribution to television.

After graduating from the University of Newcastle, where she read Scandinavian studies, Adie started her career in media as a station assistant at BBC Radio Durham. A short while later, she moved to the West Country to work as a general producer at BBC Radio Bristol. This month, Adie is set to return to the city to speak at the Clifton Literary Festival, discussing journalism in these changing times. Ahead of her appearance, we sat down with the veteran war reporter to talk about her fond memories of Bristol; her incredible career filing from the field; her advice for the next generation of journalists; and her love of literary festivals.

“I had a lovely time in Bristol, it was a very different city,” Adie recalls. “It was at a time of quite a lot of creativity – the Arnolfini was just getting going, the whole dockside and quayside area was just beginning to be developed and there were several art centres emerging. There was just a great deal going on.”

Adie worked at BBC Radio Bristol during the 1970s alongside colleagues who also became prominent figures at the Corporation, including newsreader Michael Buerk. “Local radio was immensely absorbing because we all had to work so hard,” she remembers. “We were very ambitious, we tried all kinds of programmes on local radio. We had a children’s programme, we actually did a drama which was written by one of our producers, who eventually became a scriptwriter on Coronation Street. We were sort of a mini Radio 4 when we started but locally based.”

A move to regional television news in Plymouth and Southampton gave Adie a taste of life in front of the camera. From there she moved to the BBC’s London newsroom where she “ended up by luck” working as a duty reporter.
Fast forward to the 30 April 1980 when six armed men took over the Iranian Embassy, Adie was about to report on her biggest story to date. On day six of the siege, the gunmen killed a hostage, prompting the SAS to storm the building. On the scene and crouched behind a car door, Adie was live on air; clear and unwavering. Her commentary, which cut into the World Snooker Championships, was heard in millions of homes.

A reporter gets, if you’re lucky, an extraordinary array of stories to do, and you see the world as it is. I think it’s an incredible privilege to do so

“When the whole story broke, I happened to be in central London and I was first on the site a very short time after the initial attack on the embassy, but subsequent to that I was merely another one of the reporters on rota because we were having to cover 24 hours. When it came to the bank holiday, my shift was due to start at 8pm and I got a phone call from a news organiser who said could I come in a bit earlier because nothing much had seemed to happen that day. The slightly difficult senior correspondent who was there said it wasn’t worth staying and he was going off early to a dinner party. When I arrived a couple of hours early, he had already gone. The SAS went in a short time after that. It was luck that I was there, nothing more than that.”

Over the next two decades, Adie reported from war zones across the world. She acquired a reputation for great courage under fire and reliable reporting but nevertheless still bears the scars of war. Grazed by a bullet in Beirut; hit by shrapnel in Bosnia; wounded in Tiananmen Square by a bullet that killed the man next to her; and shot at close range in Libya, her career has allowed her to experience the full gamut of human behaviour and witness both good and evil. Her autobiography, The Kindness of Strangers, offers an astonishing insight into frontline reporting.

“A reporter gets, if you’re lucky, an extraordinary array of stories to do, and you see the world as it is. I think it’s an incredible privilege to do so and you make of it what you can but the important thing is that you’re given the chance to see things and tell other people about it – that’s it in straightforward terms. As the old cliché says, ‘Journalism is the first draft of history.’”

When it comes to the importance of truthful, straightforward, factual journalism, Adie sees it as “an absolute bedrock if you want a well-working democracy”. When asked about her advice for the next generation of aspiring journalists, she spoke passionately.

“One of the functions of journalism is to be truth-telling and to show the world as it is and to show the variety in the world – to broaden minds and to bring information, sometimes from places that people can’t access or don’t know about. All of that is a hugely important job. I think it should be a terrific business for anyone to aspire to and become a young journalist”.

“What I actually think is needed right now – and I find this when talking to students of journalism – is that they should be concentrating on the here and now in this country, the place they know to begin with and to start saying what is going on in my community, what is the right and wrong of things, what needs to be looked at, what needs to be reported and is significant. If you aspire to that, you are beginning to be doing something very important.”

One of the functions of journalism is to be truth-telling and to show the world as it is and to show the variety in the world – to broaden minds and to bring information, sometimes from places that people can’t access or don’t know about

Following the recent news that Facebook’s products could pose a risk to children’s mental health and stoke division in society, Adie was asked about her thoughts on tackling the issue of ‘fake news’, specifically the kind circulating on social media, and how best to protect its youngest users.

“The problem with social media is that it is not in any way committed to being factual,” she says. “It is merely a means of expression from anybody who can access it. What happens is that not all that goes on social media is either truthful or, at times, acceptable or pleasant, but that is a problem that governments have to deal with. Most journalists think that the platforms ought to be treated as publishers and held to account – you can’t hold the general public to account but you can hold publishers to account and that is what’s needed.”

Since 1998, Adie has hosted the long-running Radio 4 programme, From Our Own Correspondent, in which a number of foreign correspondents deliver a sequence of short talks reflecting on current events in the countries in which they are based.

“I think From Our Own Correspondent is a very special programme because most of the time correspondents, whoever they work for, are reporting on current news. We can go a bit further, we can take much more personal and idiosyncratic views of their postings, and we give them the time to do it. They are absolutely fascinating insights into certain quirks of a particular country that don’t hit the news but tell you much more about a place.”

Clifton Literary Festival is returning for the second time after its runaway success in 2019. Three days of literary events are in store for anyone and everyone interested in books, poetry and story-telling. After living in Bristol for many years in her early career, Adie still visits the city regularly and considers herself to have “never left”. Looking forward to the festival, she speaks affectionately about such gatherings.

“I think literary festivals are very interesting. They are gatherings of people who not only want to discuss what’s in books but want to talk about what a lot of these books are on about, which is the state we’re in and the sort of world we live in. You get very literate audiences, who are interested in people writing about the world around us, and they are not political, they are not campaigning, they are gatherings of people who want to talk about things – I think that is wonderful.”

Kate Adie will be appearing at Clifton Literary Festival on 12 November at Christ Church; cliftonlitfest.com

Next
A world of food: a look at the winners from the world’s leading awards for food photography
Start typing to see results or hit ESC to close
bristol gender film tv history
See all results