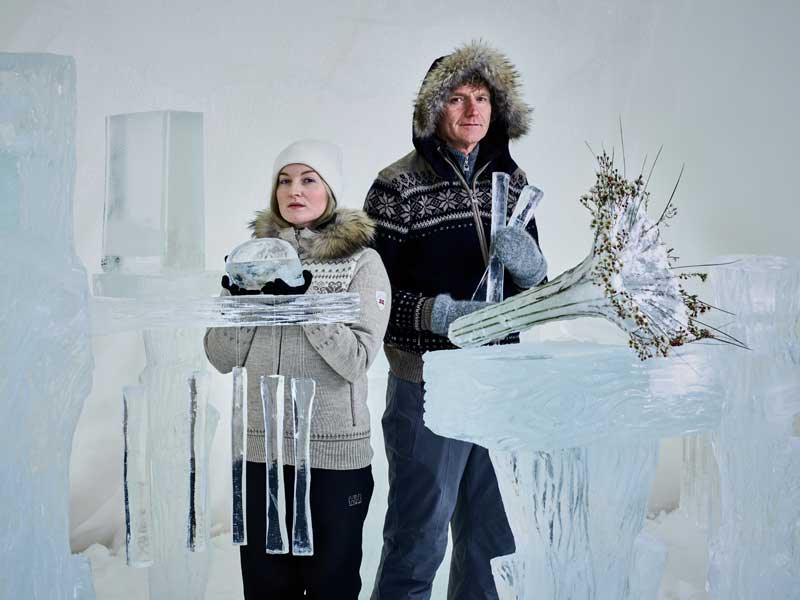 With instruments carved from solid blocks of ice, musician and inventor Terje Isungset is coming to St George’s Bristol this month to mark 20 years of ice music. His international project is bringing together artists with a long tradition of living in arctic conditions. Words by Jeremy Blackmore.

As a percussionist Terje Isungset has always looked for new sounds, but when he stepped inside a frozen waterfall and used the ice to make music, he fell in love. Harnessing the unique properties of the Arctic landscape in his native Norway, Terje began a 20-year exploration of making beautiful, ethereal sounds from the precious ice. On 18 November, Terje is preparing to bring his unique form of music to an audience at St George’s Bristol, featuring not only his ice instruments, but also musicians and vocalists from across the Arctic Circle.

The origins of Terje’s ice music date back to 1999 when he was commissioned by the Lillehammer Winter Festival to perform a concert in a frozen waterfall. Already renowned for his innovative approach to percussion in jazz and traditional Scandinavian music, he decided to make use of the natural elements. “I took the sound from underneath the waterfall, and then I hit the ice,” he explains with a smile. “I thought it was so beautiful. It was like falling in love.”

The experience opened up a whole new range of sonic possibilities for Terje, something that greatly excited him. “I’ve always been searching for sounds. As a percussionist you can, in fact, define your own instrument. If you play a trombone, you play a trombone, that’s it. You play drums, it can be this [he picks up a mug and taps a gentle rhythm] it can be glass, it can be metal, it can be whatever, so I was very eager to hear the sound of ice and if it could possibly open up something new because it had never been tried before.”

Indeed, while others have since followed Terje’s lead and experimented with frozen material, back in 1999 there was no one to ask for advice. He felt like an explorer. “There was no recording to check, there was nothing on the internet, no books, nothing. I started really from zero and I was very excited to discover the sounds.”

Nature is extremely important to Terje. Having lived among snow and ice all his life, he has witnessed first-hand the damaging affects of global warming. In 2019, he worked with Greenpeace to highlight the urgent need to protect Arctic oceans. With three other musicians, he staged the world’s most northerly concert titled Ocean Memories. The performance was recorded in -10 degrees Celsius under the midnight sun of Spitsbergen. In the closing moments of a three-minute video uploaded to YouTube, Terje plays a lament on an ice horn as sobering words appear on screen. “This year, the Arctic is suffering record breaking ice loss”, it reads.

“I think [the climate crisis] has to do with the lack of respect for nature,” Terje says. “Nature is really unique – it’s our best friend – without nature, no human beings. And if you have a good friend, you have to treat them nice and gently and with respect. It’s very simple.”

The audience at St George’s Bristol will see instruments carved from solid blocks of ice. Commercially available frozen ice does not have the properties needed to create music so Terje sources it from a range of locations, all of which offer different sonic possibilities. “The ice has to be naturally frozen and it seems it has to be rather non polluted. If I go out in nature to harvest ice, if I go to Canada, or Japan, or Norway, or anywhere, the ice will sound different from place to place and year to year. There are good years and bad years, just like wine.”

The carved instruments, which can take up to several weeks to make, are either entirely made of ice – such as the horns and the percussion – or they are hybrids, like the harps – the main body is ice but the strings are metal.
Terje will use the same instruments for every concert on his UK tour, which will see him travel from Leeds to London over a four-day period. His instruments include crushed ice, ice chimes, ice trumpets, horns and an ice-ophone – a marimba style instrument, which Terje hits with gloved hands instead of mallets. A special regimen is required to keep the instruments in top condition, preventing the ice from melting. Terje has invented not only a new form of music but also a way to play it indoors. “I thought it would be impossible,” he admits.
Throughout the performance Terje’s assistant will bring instruments on and off stage at various times, paying close attention to how they need to be handled and the ideal temperatures in which they need to be stored.

“It’s very much about logistics and timing,” he says. “If I start playing the ice-ophone, I can’t play for one hour, I have to stop after five minutes or so. This affects the concert because if I notice that the instruments are starting to melt, the sound will change and gradually disappear. Nature is the boss.”

If I go out in nature to harvest ice, if I go to Canada, or Japan, or Norway, the ice will sound different from place to place and year to year. There are good years and bad years, just like wine

“The Arctic ice music ensemble is something very unique because it is based on these traditional musicians coming in from various places in the world,” Terje says. “But they have one thing in common. For generations, they have all very much been dealing with winter and snow and their way of living has been totally related to the elements. They have had to let nature decide how life is going to be. That’s the main reason for asking these fantastic musicians to join the project.”

As well as ice, Terje also uses a range of other natural elements such as rocks, stones, wood, slate, and sheep bells. His drumsticks are made from mountain birch and his drumheads made of natural materials. “Most of my instruments have either been given to me or they have just shown up. I bought some second-hand that weren’t supposed to be used as musical instruments. I try to see the value in things – it doesn’t have to be new or good-looking for me to use it.”

While he could never have dreamed of forging a career in ice music, Terje was drawn to percussion from a very early age. He soon started collecting jazz and rock records from local record shops and via mail order from the UK. Pioneering jazz-fusion drummer Billy Cobham was among his early heroes. “I wanted to play drums all my life,” he says. “When I was six, I started to hit things. When I was eight, I got my first drum kit and when I was 11 or 12, I put some concerts together with my father, who is an accordion player.”

Terje, now 57, has proved to be a pioneer in his own right, encouraging musicians around the world to push the creative boundaries. Ultimately, however, his message is subtle but clear; ice music is directed by nature. As quoted during the world’s most northerly concert, Terje insists, “You have to treat ice with respect, otherwise it breaks. We should do the same with nature.”

Terje Isungset, along with an extraordinary line up, will be playing at St George’s Bristol on 18 November; stgeorgesbristol.co.uk. Produced by Sound UK.

Next
Filing from the field: an interview with Kate Adie
Start typing to see results or hit ESC to close
bristol gender film tv history
See all results