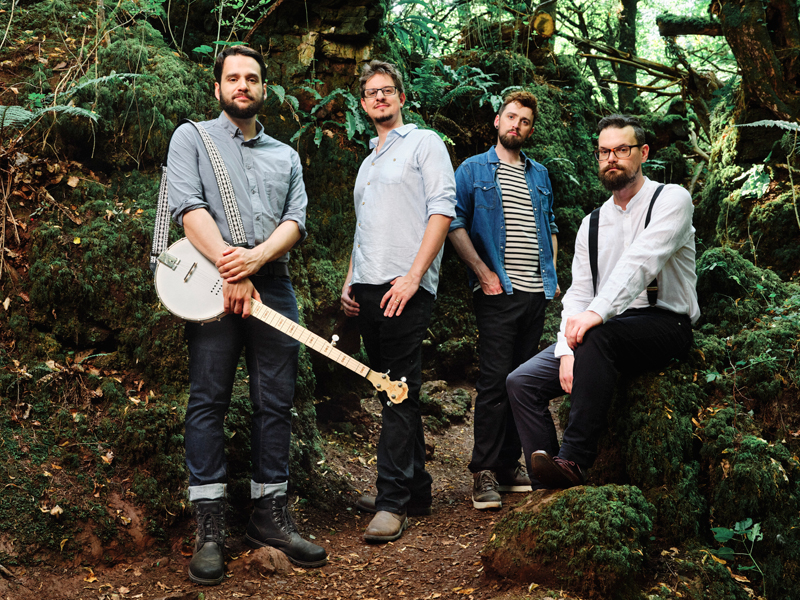 With Bristol hosting its first sea shanty festival this month, we thought it was a pretty good time to catch up with the city’s lockdown folk sensations The Longest Johns – now working on an album with Decca. Going viral on TikTok may have provided a bit of validation, but they’ve always been playing the long game. Words by Jeremy Blackmore

Sea shanties are a centuries-old part of Bristol’s seafaring tradition, but in a capella band The Longest Johns this traditional form of folk music has found a new voice for the TikTok generation. The city’s new folk sensations have re-invigorated the sea shanty, navigating new waters of collaborative online platforms to digitally perform and engage with fans around the globe in times when people have been unable to get together in person.

During lockdown they rode a fresh wave of popularity on the social media platform TikTok, scoring a top 40 single and signing global deals with Decca Records and live touring agency United Talent. The group’s version of Wellerman – a New Zealand whaler’s song written in the early 19th century – has been streamed more than 60 million times and sat comfortably at the top of the UK and Global Viral Charts earlier this year. Its chart success saw it become the first entirely a capella sea shanty to make the UK Official Chart Top 40. The song’s protagonist shares the group’s hopes for better times ahead; something everyone has, no doubt, been able to relate to during the pandemic.

Jonathan ‘JD’ Darley, Andy Yates and Dave Robinson had been friends for some time when they first came together out of a mutual love of traditional folk songs and shanties at a barbecue in 2012.

“That just happened to be the day when we’d all been listening to sea shanties just kind of by accident, really, and we started talking about it,” remembers Dave.

“We thought we could give it a go and then just sat in the corner of someone’s garden, tried to work out parts and then started off at local pubs, talent nights and open mics. It just spiralled from there.”

Sea shanties were once commonly sung as work songs, typically in call-and-response fashion, to accompany and coordinate rhythmical labour involving group efforts aboard large merchant sailing vessels. Some of these songs told tales of voyage and exploration.

JD explains that it was listening to the song Northwest Passage by the late Canadian folk musician and songwriter Stan Rogers that really connected with him and helped him understand the power of this folk tradition. “There’s something about the way that it was written, and the fact that it’s taking on this wonderful story that’s more than just some thoughts and feelings, put down on paper. It’s this actual story that takes you through this exploration that he was going through. It was that moment of understanding and clarity: right, so this is more than just some random songs, it means more.

“Even though it’s written about something that happened hundreds of years ago, there’s a reason why so many of these songs have lasted that amount of time. Even though they’ve been written about things from the past, they’re still relevant in a lot of ways today. It just suddenly meant a lot more to me from that point on.”

Through their recordings and performances, folk groups like The Longest Johns and The Unthanks, in the North East, play an important job in preserving oral and musical history for future generations. But, says JD, it is important that folk music should continue to evolve as The Longest Johns themselves have, after starting out by playing folk songs in a more traditional style.

“More recently we’ve accepted that folk music isn’t just like a static thing in the past, almost like a museum where it’s just sat there, and you keep it as neatly preserved as it was. It is a kind of living tradition, where those songs live on and carry on growing and developing as new people hear them and put their own interpretations on them.

“We wrote a song about that, called Ashes, about taking those things and not just keeping them perfectly preserved but changing and adapting them and letting them grow and breathe and find new life as times change – which is what we try and do, really. So as much as it’s keeping stuff from the tradition, we want it to be new and fresh and have our own take and keep it relevant to modern audiences as well.”

The band recorded their first homemade EP, Bones In The Ocean, in 2013, juggling live dates around day jobs and playing at whichever festivals would give them a spot. The group was very much a cottage industry in those early days. They remember stuffing envelopes and mailing out copies of the EP by hand.

With Robbie Sattin joining as second baritone in 2015, just ahead of Bristol’s Severn Seas Festival, they released their first full-length album, Written in Salt in 2016. Between Wind and Water followed in 2018, containing their recording of Wellerman, with Cures What Ails Ya appearing two years later.

Then came the lockdown #ShantyTok craze after Scottish postman Nathan Evans posted sea shanties on TikTok, attracting millions of views and celebrities, musicians and members of the public alike duly recording their own versions. The Longest Johns were well placed to benefit from this internet sensation. Their 2018 recording was one of only a few versions available on online streaming platforms and they found international fame almost overnight.

They had been making imaginative use of online platforms already, though. Thousands of people from across the world regularly tune into the band’s live Twitch sessions, where they rock maritime songs alongside the more unusual and less traditional folk tunes, while in August 2019 they released a video of themselves playing the online pirate simulator game Sea of Thieves, where they surprised other players with a rendition of Wellerman. That video was also a viral hit, driving up streams of their music.

Early this year, that level of interest rose to another level as the #ShantyTok phenomenon took off. The phone started ringing with offers and the group realised something had changed. Says JD: “It was incredible to see; it just took on its own life and identity and more people started connecting with it. It was really cool because we love this music and we care about it. We want more people to enjoy it, so trying to find new ways to get heard by more people has been a goal for the band for a long time. Seeing that actually happen was a proper, ‘yes!’ validation moment – ‘our journey has not been in vain!’ It was a strange one, for sure.”

With offers pouring in, perhaps the project that gave the band the greatest satisfaction was a global singalong of Wellerman. The Longest Johns invited fans to help create a virtual choir performance and 6,500 people took part. The ‘Wellerman Community Project’ is a keepsake of what was so special about that time.

“As much as there was loads of other excitement around the song and different companies trying to use it for all sorts of different advertising, for us, the real beauty was this song being something that so many people around the world have connected with and that’s special and we wanted to capture that moment in that way,” says JD.

“So, that’s what that video really was for us, because we turned down a bunch of different things. It was like: hey, can you rewrite the song for our advert? That’s not what it’s about for us really.”

They are thrilled to be part of a prestigious label with the 90-year legacy of Decca, who won out in a transatlantic bidding war.

Following Decca’s release of the Wellerman EP this spring, the group have been working on a new album (due out 21 January) and enjoying returning to normality by playing to live audiences again after a year of seeing success happen in a virtual online space.

“It’s nice to kind of have those experiences again and start to understand it other than just being at home. You can look at numbers growing and stuff like that, but you can’t really experience that otherwise,” explains JD.

They hope to play gigs in as many countries as possible, with dates in the UK and Europe and playing to millions of new fans in the US and Australia who have discovered them through Wellerman. Fans new and old can rest assured that they will continue to focus on the music they love so much.

“There is all the attention that comes with having viral success. But we’re also keen to try and make sure that people know that was the result of what we’d already been doing.

“So, we haven’t really intended to change what we’ve been doing at all,” says Robbie. “It’s just been very fortunate that now we have that platform to be able to leap from, take us on to the next level.”

They return to their Bristol roots in December with three nights at Thekla and believe the city’s folk scene is particularly healthy. They recall sessions organised by Jimmy Aldridge and Sid Goldsmith at the Star in Fishponds which has gradually taken over the whole pub due to its popularity.

“Bristol’s got a really great folk scene and I think it always has,” says Andy. “The thing with traditional folk music is often you don’t find it unless you look for it, especially with sea shanty singing, because in loads of cities across the UK, there’s lots of sea shanty people, there’s lots of singing groups. If you look for it, you will find it somewhere. So, what we’ve discovered is the folk scene in Bristol has actually been quite welcoming and healthy.”

“There are so many talented singers and performers and writers,” adds JD. “It’s great to see that growing.”

The Longest Johns play three nights in Bristol in December ahead of their new album, released via Decca on 21 January; thelongestjohns.com