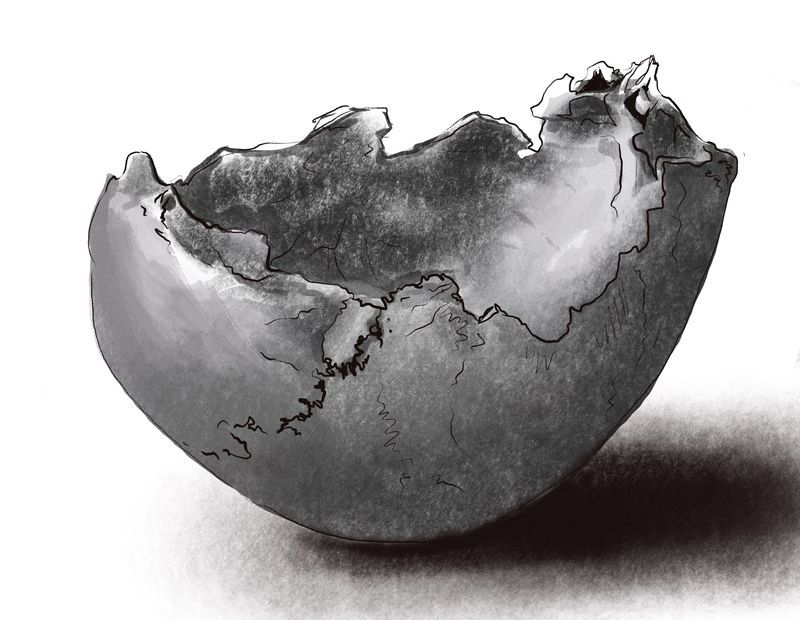 No bone unturned: an interview with Professor Alice Roberts

As technology takes a major leap forward, archaeology and genetics have been set on a collision course. Bearing messages from the ancient world – some buried in mistruths for millennia – Bristol-born scientist Professor Alice Roberts reaches right back in time with her new book Ancestors, as she tells Millie Bruce-Watt

Anthropologist, biologist, broadcaster, author and professor of public engagement in science at the University of Birmingham, Alice Roberts has been working where biology meets archaeology for the last 20 years, bearing messages from the ancient world and pushing our understanding of human evolution ever further.

A familiar face to many, Roberts has appeared regularly on the BBC and Channel 4, presenting the geographical and environmental series Coast, Digging for Britain and Time Team as well as a number of documentaries focusing on ancient migrations, evolution and prehistory.

A prolific scientist and writer, Roberts is now back in the limelight with her latest book, Ancestors: A Prehistory of Britain in Seven Burials. Less than two weeks after it hit the shelves, Ancestors became a bestseller in The Sunday Times. Perhaps most interestingly to Bristolians, the book explores an ancient burial site in Cheddar Gorge, just a short, winding jaunt from the city, which unlocks astonishing stories of ancient Britain that had been buried in mistruths for millennia.

Described as “the new Da Vinci” in a recent review of Ancestors, Roberts is a formidable storyteller and her fascination with her subject is clear and captivating. We caught up with the Bristol-born bone expert to find out more about how the book came to be; how advances in genetics are transforming archaeology; and, of course, how cannibalistic cavemen once roamed our local landscape.

The power of technology
“Ancestors focuses on a series of ancient burials that help to tell the story of prehistoric Britain, and it draws on my fascination with this collision between archaeology and genetics, which has been happening for a while but feels like it’s coming into its own now,” says Roberts.

Since she made The Incredible Human Journey 13 years ago, technology has come on leaps and bounds. From analysing DNA and discovering small clues in a skeleton, scientists are now able to sequence whole genomes in a single day. As a result, they have been able to see more depth and complexity than ever before in the story of human origins and understand the evolution of human health and disease. Roberts is also helping researchers with a project at the Francis Crick Institute in London entitled 1000 Ancient Genomes. It is the most ambitious ancient genomics project to date and the DNA it looks at will be fully sequenced, “leaving no stone unturned, no stretch of DNA unread,” as Roberts writes.

“I’ve enjoyed writing about burial sites and discoveries that happened a long time ago but I’ve also enjoyed having that element of a project that’s live and happening right now. One of the most interesting questions in Ancestors is all about British prehistory. For example, in the Bronze Age, we see a completely new culture arriving but we didn’t know whether it was just people already here, adopting this culture, or whether it was a new group of people coming in. We couldn’t get to the bottom of that question until genetics could shed some light on it. Now, looking at genomes in the preceding Neolithic, we can see that there is a huge population turnover – it was new people arriving and eventually their genes are the ones which predominated the population. It’s really interesting to see how that culture changed over the years and we can imagine more families arriving, over a few centuries.”

The making of Ancestors
Ancestors is split into seven chapters, each focusing on a different discovery. From an elaborate burial in the depths of the Ice Age to the most richly furnished grave that’s ever been discovered in Europe, Roberts has delved into the history of ideas and brought individuals’ stories back to life.

“All of them are fascinating because they are all quite different. Some of them have these interesting backstories and then some of them are far more recent, like the Amesbury Archer turning up when a developer was having to excavate ahead of a new build.”

The Amesbury Archer is an early Bronze Age man whose grave was discovered during excavations in Amesbury, near Stonehenge. The grave was uncovered in May 2002, and the man is believed to date from about 2300 BC.

“This man was buried with 18 arrow heads; he had three copper knives; he had gold ornaments. We’ve got genetic information about him as well as chemical analysis of his teeth so we know that he grew up somewhere around the Alps and his burial tells us that he must have been seen as special. The interesting thing about his skeleton is that he’s got abnormalities in his shoulders, which may possibly be connected to the fact that he was an archer. But perhaps more surprisingly he’s got a disability – a missing knee cap and a very badly misshapen femur on the left side. The bones are withered so he would have definitely walked with a limp. It’s interesting because we’re looking at someone who is living with a disability but is clearly an extremely well-respected individual with a high status – it tells us something about perspectives on disability in the past too.

Close to the bone – a chilling revelation
Without a doubt, one of the most shocking discoveries in Ancestors was just 18 miles from Bristol. Cheddar Gorge was home to not only a healthy amount of commercial competition during the late 19th century, which provides great entertainment for us today, but cannibals that roamed the gorge at one point in time – a gruesome realisation.

“I got very intrigued by the competition between Gough’s Cave and Cox’s Cave and the way both of them were fighting over Victorian tourists,” Roberts says with a smile. “Richard Gough, who owned the cave, would advertise it as ‘come and see this beautiful natural cave’ but he brought in cart loads of stalactites and stalagmites from somewhere near Weston-super-Mare. There are these beautiful pools with all these reflections of stalagmites but they are completely artificial – they are made of Victorian concrete!” she laughs.

It was during this period when one particular discovery led to serious whispers of cannibalism at Cheddar which never quietened. “When Richard’s sons were putting in trenches at the entrance of the cave to stop it flooding in winter, they found human remains. Since then, there have been a whole series of excavations, turning up quite a lot of human material including a nearly-complete skeleton called Cheddar Man, which dates back about 10,000 years. But there’s also a collection of smashed up bones from around 12,000 years ago and these were thought to be evidence of cannibalism when they were first found.”

Although Roberts was originally sceptical of these stories, Dr Silvia Bello, who had been re-examining the bones at the Natural History Museum, was able to confirm them as true.

“It’s very clear from her assessments that it’s humans doing the smashing but, not only that, there are human teeth marks on some of the bones,” she says. “The way they are using tools to smash open long bones to get to the marrow also suggests that it’s almost definitely nutritional cannibalism. Then, there’s really odd things,” Roberts says with a long pause. “There’s a skull that has been turned upside down and had the whole of the base taken off to make it quite a decent cup.

It seems very strange to us today and everso gruesome but we have to stand back and think; ‘was it gruesome to them? Or was it normal?’ It could be anything from a very respectful way to treat the dead to eating enemies that you’d killed. It could simply be people driven by desperation to eat each other. That’s what I like about prehistory – it makes us think about our own responses.

“We don’t know if we’ll ever get to the bottom of why they were doing it but we definitely know it was cannibalism in Cheddar.”

OurWorld Bristol
As an avid lover of nature; a patron of Twycross Zoo; a champion for conservation, Roberts has recently backed the new proposal to regenerate the site of Bristol Zoo Gardens following its closure in late 2022. OurWorld Bristol is a proposal to create the world’s first augmented reality zoo, based within the historic 12-acre gardens, which are currently under threat from a private housing development.

OurWorld Bristol is aiming to provide a fully immersive virtual experience, enabling visitors to experience animals in their natural habitat, going back millions of years. The initiative has been taken by the award-winning film director Stephen Daldry; architect George Ferguson, founder of Bristol’s Tobacco Factory; and boomsatsuma’s executive director Stuart Wood. Having grown up in Henbury and attended Red Maids’ School, Roberts remembers going to Bristol Zoo Gardens as a child.

“It would be such a loss for communities in Bristol if the site were to be sold off just for housing so I was really excited by this new proposal, which has seen lots of people come together including Sir Tim Smit, the founder of the Eden Project, which gives you an idea of how ambitious and exciting it could be.

“I think the big challenges facing us as a human society in this century are all based around our relationship with nature. We need to better understand it and that starts with education – that starts with children. We want people to fall in love with nature and want to protect it and that’s why OurWorld Bristol is such a strong project.”

In November, Roberts will be touring the UK with her new book, giving behind-the-scenes insights from digs and asking what a grave can tell us about a person; how genetics is revolutionising what we know about the deep past and what it all means for us, today. Roberts is, without doubt, pre-eminent in her field and, given her mesmerising depth of knowledge, ‘An Evening with Alice Roberts’ is guaranteed to be packed full of astonishing stories – an evening to remember