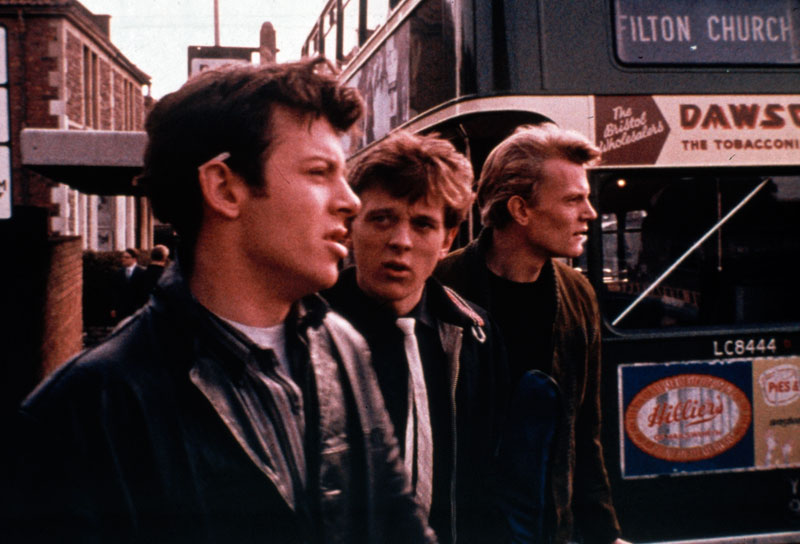 Years before a single bedpan had been emptied on an episode of Casualty, Bristol set the scene for one of Britain’s earliest teen flicks, capturing a city on the cusp of change. Darryl W. Bullock uncovers Bristol’s most Bristolian movie

Bristol has supplied the backdrop to a staggering number of movies and TV shows over the years, and it’s also recognised as a hotbed for TV and film production, for internationally acclaimed animation and as the home of significant acting, writing and directing talent. Even under Covid the Doctor Who crew managed to make it to Bristol to film scenes for the next series. There’s so much happening here that, in 2017, Bristol was awarded UNESCO City of Film status.

The city is rightly famous for supplying the location for everything from Only Fools and Horses and The Young Ones, to more recent successes such as Being Human, Sherlock and A Very British Scandal, but our cinematic and televisual history stretches back long before then. Years before Morph was a twinkle in Aardman Animations’ collective eye, before a single bedpan had been emptied on an episode of Casualty, in 1962 Bristol was used as the backcloth to one of Britain’s earliest teen flicks, Some People.

Made decades before the city became a major player in Britain’s film and TV industry, there has never been a more Bristolian film than Some People. In fact, Bristol is such an integral part of the plot that it really deserves its own credit in the cast list. Opening with an aerial shot of the city that takes in still-recognisable and iconic buildings including City Hall, before racing around the city centre and past Vespa dealer Cruickshank Motors (remember, this was before the Italian scooters would become synonymous with mod culture), Some People captures Bristol on the cusp of change. There’s a shot of a gorgeous neon sign advertising Bristol brand cigarettes on a long-demolished building on Broad Quay – where the Radisson Blu hotel now stands – and we get a brief look through the windows of record stores, TV hire-purchase shops and jewellers. The local atmosphere is completed by images of several green Bristol double decker buses, and dozens of beautiful, early ’60s advertisements.

The action starts proper with the leather jacket-wearing, bequiffed bad boy Johnnie leaning on a railing in the old Bristol coach station, before we’re treated to a tour of the docks and a promise of a night up at the water tower, and that’s just the first five minutes. And – hang on a moment – isn’t that Harold Steptoe reading a copy of the Western Daily Press? ‘They were young, bored rebels – living for kicks’, according to the movie’s tagline, but who on earth would have thought that these teenage tearaways would have found what they were looking for in a basement coffee bar on Whiteladies Road, or at a mobile takeaway on Durdham Down?

Shot entirely in and around the city, Some People features a number of local actors and musicians alongside such well-known names as Harry H. Corbett, Ray Brooks (who plays our hero, Johnnie, and will be best known to readers of a certain age as the narrator of cult ’70s animated series Mr Benn), David Hemmings and Kenneth More – the star of such box office hits as Reach for the Sky, Doctor in the House and Genevieve. With Some People made to highlight the work of the Duke of Edinburgh’s Award scheme, More donated his usual fee to the youth charity.

Brooks and Hemmings had just finished work on the Billy Fury vehicle Play It Cool, directed by Michael Winner; Some People catches these two rising stars shortly before they landed their defining roles, Brooks in The Knack – And How To Get It, and Hemmings in seminal arthouse movie Blow-Up. Angela Douglas, who plays Terry – the girl all the boys are potty about – was 22 years old when she began an on-set affair with the film’s male lead, the 48-year-old Kenneth More. The couple married in 1968 and were together until More’s death in 1982. She appeared in four Carry On films, including Carry On Cowboy and Carry On Screaming. Anneke Wills, who played Anne, More’s daughter in the movie, would become best known for playing Polly in 36 episodes of Doctor Who. Also of note is Frankie Dymon, the young Black actor who plays drummer Jimmy. Dymon would go on to join political activist group the British Black Panthers, appeared in the Rolling Stones documentary Sympathy For The Devil, and would write and direct the country’s first Black Power film, Death May Be Your Santa Claus.

The film takes in a visit to a long-gone basement coffee lounge near the Triangle, the El Toro Espresso Bar on Queen’s Road, plus youth clubs and church halls, the Bristol aircraft factory and Wills’ cigarette works in Bedminster, even a spot of dress shopping in Marks and Spencer in Broadmead – apparently escalators were big news in 1962. There’s a trip to the Old Vic, then still known as the Theatre Royal, to see the play The Sitting Duck, which had its world premiere there on 10 April 1962. The younger members of the Some People cast spent several weeks in Bristol before filming commenced, picking up the local accent and checking out locations. It paid off; there’s an authentic quality to the film that is missing from movies shot entirely in the studio, although Corbett’s West Country accent leaves a lot to be desired! Scenes of the youths riding on their motorbikes along the Portway and beneath Clifton Suspension Bridge, for example, could never have worked if they had been filmed on a studio lot, or on static machines in front of a backdrop. The fact that some of the dialogue was improvised only adds to the realism.

Despite the authentic local feel, Some People is also full of weird continuity errors that most viewers would not notice, but that would make your average Bristolian tear their hair out. Take the scene where Johnnie is sharing his first drink in a pub with his father. The pub in question is The Palace, in Old Market, now sadly closed, but there’s no mistaking the brass, barley sugar twists that still adorn the now-abandoned bar. Johnnie steps outside the pub and walks across the road to The Magnet fish and chip shop which, as we all know, is in Dean Lane, some two miles away! Early on in the film the lads are walking through St Nick’s Market, past Giuseppe’s on Market Steps and suddenly they are on Christmas Steps, parading past book sellers and dirty magazine emporia.

You can’t have a teen flick without music, and central to the plot of Some People is how these bad boys go good through the restorative power of rock ’n’ roll. Although we see Brooks, Hemmings and company playing various instruments in the film, and Angela Douglas singing, the soundtrack was, in fact, provided by local band The Eagles (not in any way connected with the US band of the same name) and teenage punch-card operator Valerie Mountain, who was born in Weston-Super-Mare. The Eagles, a popular Bristol band modelled on The Shadows, signed to Pye Records and released several singles and two albums; Valerie had been signed to Columbia Records in 1961 after appearing in Bristolian passion play A Man Dies – on the BBC – releasing a single and appearing on the soundtrack album. An EP of the music used in Some People was issued by Pye to coincide with the film’s release, featuring six tracks from Valerie and The Eagles and reaching number two in the EP charts. The disc was denied the top spot by Elvis Presley.

Originally called The Strollers, The Eagles had been enlisted to record songs for the film’s soundtrack by composer Ron Grainer, best known perhaps for writing the TV themes to Dr Who (there’s that connection again) and Tales of the Unexpected. Grainer and his wife took the youngsters under their wing, with Margo Grainer becoming their manager. The four members, Rodney Meacham (who had been awarded bronze, silver and gold Duke of Edinburgh awards), Terry Clarke, Johnny Payne and Mike Brice, had been together since 1958: the band’s name came from the Eagle House Youth Club in Newquay Road, Knowle West. They were an obvious choice for the film, having already won a Duke of Edinburgh’s Award for Rhythm Group of the Year at a concert at the Royal Festival Hall. Their first release, aside from the soundtrack EP, was an instrumental that Grainer wrote for the film, the aptly titled Bristol Express. Grainer would also write another tune for the group, March of the Eagles, which appeared on the B-side of their next single, a cover of the theme to the film Exodus. They would also cover a number of their mentor’s best-known tunes, including the themes to TV shows Maigret and Steptoe And Son.

Some People had its official premiere in front of the Duke of Edinburgh, naturally, in London on 17 July 1962. According to contemporary news reports, the lads from The Eagles arrived at the cinema without their tickets and could not get in until Prince Philip came to their rescue. The Eagles recorded their first album, Smash Hits, in 1963 and toured nationally on the same bill as hitmakers Del Shannon, Johnny Tillotson and folk trio The Springfields, shortly before Dusty went solo. A second album, Smash Hits Volume Two – a compilation of their singles and EPs – was only issued abroad. They spent New Year 1965 performing on board the Queen Mary, but split up shortly afterwards, sadly without ever scoring a chart hit in their own country. Valerie Mountain, who was feted in the press as the new Helen Shapiro and appeared in concert with Tommy Steele, turned her back on the chance of fame, announcing that she was “not taken in with tempting offers to turn professional singer anymore.” She married in 1964 and left the music industry for good, later emigrating to America.

Some People remains as a vibrant, priceless, technicolour time capsule of Bristol at the start of a decade that would not only change our city, but change the world forever, and offers a rare window on the lives of teenagers before The Beatles came along and shook everything up.

Some People is available on DVD and Blu-ray from Network

Main image: The cult 1960s musical drama is about a boy who forms a guitar band – the local atmosphere is completed by green Bristol double decker buses, and early ’60s ads. Credit: Network

Previous
Are you struggling to book a GP appointment?