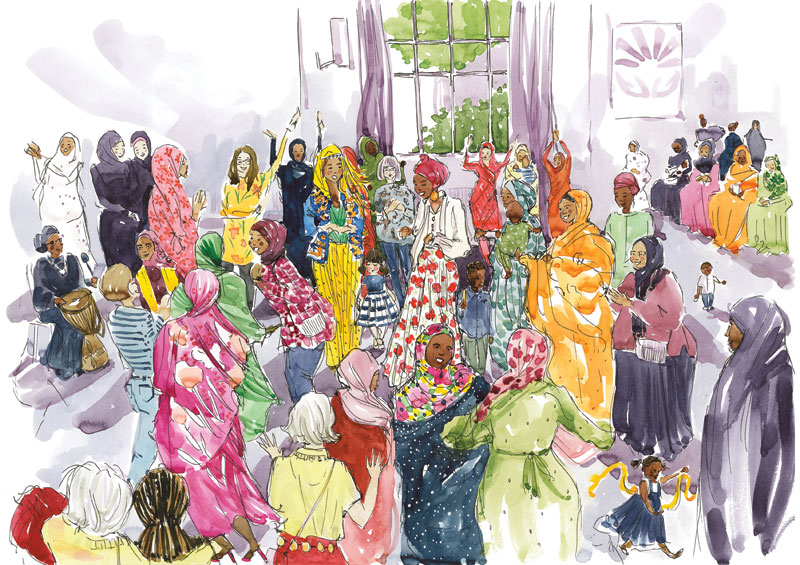 The Power of The Sisterhood: Refugee Women of Bristol

As the charity Refugee Women of Bristol celebrates its annual dance event this summer with beautiful illustrations by Niki Groom, we take a closer look at the monumental work that it’s doing in the city…

As it often falls to the work of non-government organisations and charities to support and empower refugees and disenfranchised groups in communities, it is crucial that we protect and preserve these precious resources for not only the current generation but for all those that follow. Refugee Women of Bristol (RWoB) is a brilliant example of a charity that is committed to uplifting the women that walk through its doors.

Since it was co-founded in 2003 by Layla Ismail, who came to Bristol as a refugee from Somalia in 1995, the charity’s work has been unceasing, growing in memberships, partnerships and funding and never failing to provide a safe space for those seeking a sanctuary.

Based at Easton Family Centre, RWoB offers English classes, wellbeing workshops, healthcare support, childcare and, above all, a sisterhood for its near 500 members. For the last nine years, the highlight on the charity’s calendar has been its annual dance event, which forms part of the Bristol Refugee Festival. It offers an opportunity for members to celebrate each other’s music, food and culture. This summer saw the return of the dance event since it was forced online by the Covid pandemic. As no cameras are allowed at the dance in order to protect anonymity, award-winning Bristol-based illustrator Niki Groom, also known as Miss Magpie Fashion Spy – who has worked with international brands including Molton Brown, Paco Rabanne, Clinique and Selfridges – was invited to capture the magical moments of merrymaking. The joy is utterly palpable.

This month, we speak to RWoB’s drop-in coordinator Negat Hussein, and Niki to find out more about their work and why the charity has a special place in their hearts.

TBM: How did you get involved with Refugee Women of Bristol?
Negat: I came across the charity by chance when I struck up a conversation in Arabic with a mother who didn’t speak English at my child’s playgroup. I was drawn to the idea of volunteering with a community of women and I soon became a member, working in the kitchen, reception, classroom and creche. Later, I became a trustee, and then chair of the organisation. Member-led empowerment and community spirit drew me to this remarkable charity; values that the charity still leads by nearly twenty years later.

Tell us about the annual Refugee Women of Bristol dance and how it first started…
We have lots of different cultures and lots of different languages in our woman-only space. We were really curious to know how our members celebrate occasions; how they dance, how they sing, what their culture is like, so we decided, as music always brings people closer together, to host a dance event to find out more about them. The dance is part of Bristol Refugee Festival, which celebrates refugees and everything that they bring to the city. Before lockdown, we had around 150 people join us at the dance. We used to open up the doors for other women in the community to join us as well. This year, we had about 78 women join us, which comprised of our members and members from other organisations that we work with. There were so many hugs and so many smiles – it was such a nice way to bring everyone back together again. This year, we also added Ukrainian music to our dance event because we have some Ukrainian members now. It’s also a way of welcoming them into the group; we’re a sisterhood and we want them to feel welcome.

What services does Refugee Women of Bristol provide?
We have a drop-in centre on Tuesdays during term time at Easton Family Centre where women can learn English, do arts and crafts and get together with friends. We have regular coffee mornings where people can come and share experiences, talk about matters in the city and discuss any health issues. We have very strong links with a lot of organisations in Bristol, including healthcare professionals, so we invite them to host welfare workshops where our members can learn about the different organisations and charities that exist in the city.

We offer 1–1 reading classes, where women can practice their English. We also have a crèche so women can either attend a class or have some time to themselves. We also deliver a project called Mend the Gap, which addresses multiple forms of violence, such as FGM abuse, forced marriage and honour violence as cultural forms of violence against women and girls exist within Black and Minority Ethnic (BME) communities, particularly African and Arab speaking communities. It includes asylum seekers, trafficked women, refugees, and those with no recourse to public funds. We are a member-led charity, so we’re always trying to meet the womens’ needs.

We also have Arabic, Somali and Mandarin interpreters and community workers that help people make appointments, read letters and get referrals. It always makes it easier for everyone to have that clear communication. The reason we have these three languages is because these are the three most spoken languages at our drop-in centre at the moment. The dynamic changes all the time depending on where the wars are in the world.

Having seen first-hand the positive impact the charity has had on so many lives, why is it so important that organisations like Refugee Women of Bristol exist in cities?
These charities are so important to communities. We work hard to make Bristol a welcoming, safe and inclusive place for people seeking a sanctuary. We are run by people with lived experience and refugee backgrounds and our aim is always for women to come, to feel empowered, to build confidence and then to move on in life.

How best can people support Refugee Women of Bristol and the brilliant work that you do in the city?
We have a JustGiving page on our website where people can donate to us – any size donation is always very much appreciated. We’re also really thankful to Niki for her work and support. We don’t take any photos on the day so we thought it was brilliant that Niki could use her illustrations to capture the event and bring it to life.

TBM: Tell us about your background…
Niki: I studied fashion design and was a designer for for over 15 years before becoming an illustrator. I’m used to creating fast-paced work, being aware of trends, creating product that will appeal to the general public – and in those ways the industries are very similar. I’ve since created window displays, luxury packaging, artwork for social media and websites. I also illustrate live at events, creating 10-minute head-to-toe fashion illustrations at corporate parties or product launches. I love how illustration allows me to do all of this different work at once.

Talk us through your creative process and how you created the illustrations at Refugee Women of Bristol’s annual dance event…
For reportage work like this I really try not to plan too much, I go equipped with a variety of paints and pens and see what inspires me. RWoB doesn’t allow photography at their events in order to protect the anonymity of their members, and so on this occasion I knew that creating an image of the women dancing together would be really useful as otherwise there was nothing visual they could share on social media. I sketched in black pen at speed and then when I got back to my studio I added paint. This again helps to keep the anonymity of the members as I often make up outfits and colours.

Can you tell us about the work you are currently doing for Refugee Women of Bristol?
When I was at the event and the women saw what I was doing, they responded really well to it and when the image was shared on social media people loved it, so I wanted to work out a way for RWoB to receive keepsakes from the event and raise money in the process. I decided to sell tea towels with the image on. They are £14 each and £4 will be donated to Refugee Women of Bristol. When you buy one you can choose to add a second that’s donated to the charity.

Cameras can sometimes feel too intrusive – what is it about live illustration that you enjoy the most?
In an environment such as this I love feeling part of the event whilst also capturing it. There’s nothing in-between me and the women, we can laugh and chat while I work.

I like to capture energy and movement in my work and this artwork does that well I think. There are lots of little stories in the piece that happened over a few hours, someone comforting their friend and then you spot them again dancing, a child playing with a ribbon, someone banging the drum, a woman leading a dance. These things all happened but not all at the same second, so it could never have existed as a photo.

Can you tell us about other events that you have attended in Bristol recently?
I first started creating reportage work in Calais in 2016. I went to volunteer with Help Refugees and it was soon apparent that if I drew what I was seeing it would be useful for the charity. So I stopped cleaning/packing and started sketching for the week instead – they shared my work on their blog and social media and it attracted donations and more volunteers. Since then, I’ve illustrated at lots of events in Bristol and London, Trump’s Muslim travel ban, anti-Brexit March, Richard Ratcliffe’s Hunger Strike for Free Nazanin, the vigils for Sarah Everard, Bibaa and Nicole, and then more recently the Rwanda policy protest and Little Amal visiting Bristol.

Where would you like your work to take you in the future?
I’d love to work with a big newspaper covering protest and current affairs. I think sometimes people turn away from difficult imagery but will engage with illustration. With this most recent project with RWoB, I crowdfunded myself a fee for the first time. This allowed me to spend more time creating the artwork in my studio, rather than chasing other paid work. With my Sarah Everard vigil artwork, I crowdfunded to place the artwork on billboards and posters around the UK – it was really powerful to see people standing waiting for a tube reading all of the placard comments on the artwork. I’m excited to see what the future brings with this style of work.

If you can, support Refugee Women of Bristol via the website: refugeewomenofbristol.org.uk | See more of Niki’s work, donate to her crowdfund and purchase a tea towel at: missmagpiefashionspy.com

Next
Flying High: in conversation with Dr Mya-Rose Craig