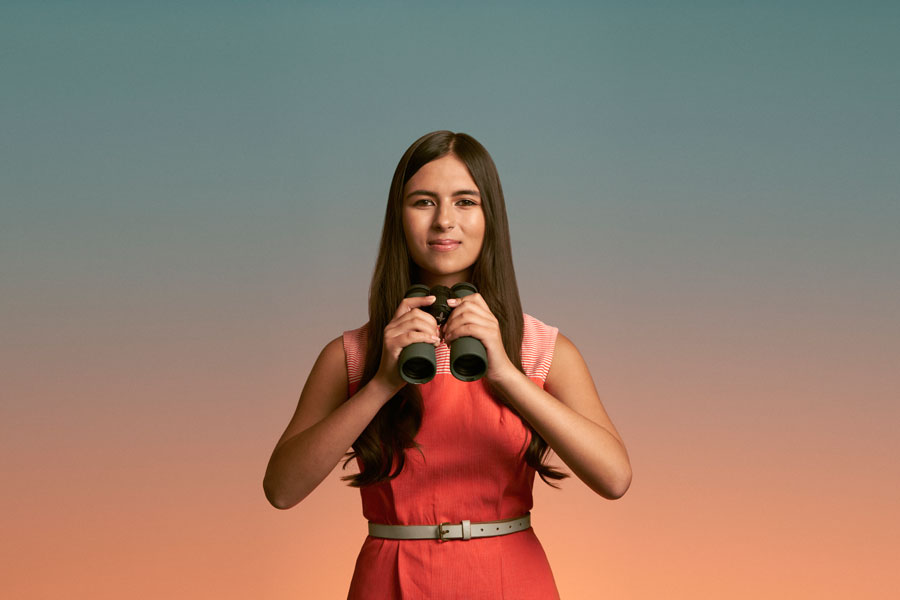 As Dr Mya-Rose Craig – aka Birdgirl – releases her new memoir, we sit down with the 20-year-old environmentalist to look back at all that she has accomplished and all that is yet to come…

Before it even hit the shelves last month, Dr Mya-Rose Craig’s new memoir Birdgirl was dubbed as one of the most anticipated environmental reads of the year and eloquently described as “lyrical, poignant and insightful” by author Margaret Attwood (The Handmaid’s Tale). An accomplishment, I’m sure, that came as no surprise to most, given Craig’s track record.

The 20-year-old British-Bangladeshi ornithologist, environmentalist and diversity campaigner is remarkable in many ways. She is the youngest person to have ever set eyes on five thousand different birds – half of the world’s species; the youngest British person to be awarded an honorary degree, which she received from the University of Bristol at the age of 17, and the world record-holder for organising the most-northerly climate strike on an Arctic ice cap – an incredible feat that she undertook at 18.

What’s more, just days after the release of her memoir – a mindful, reflective and uplifting account of a life devoted to avian observation – Craig was presented with The Diana Award, one of the highest accolades a young person can achieve for social action. She was recognised for her work with award-winning social enterprise Black2Nature, which she founded in 2015 to campaign for equal access for marginalised communities. Presented by Prince Harry at a virtual ceremony for the only charity that carries his mother’s name, he honoured Craig alongside 180 changemakers and young philanthropists from 29 countries.

“It was a big surprise,” Craig said with a tone of bewilderment still lingering in her voice. “I can’t even put it into words, it was so unexpected. I didn’t even know I had been nominated.”

[When I was nine-days-old] we went to see the Lesser Kestrel in the Isles of Scilly and my parents have this lovely picture of very new-born me with my eye pressed up against a telescope. When I say I have been birding forever, I mean it.

When I sat down with Craig, who was in the midst of a press tour after just finishing her first year exams at Cambridge University where she studies Human, Social and Political Sciences, she said her month had been “quite bonkers”. A stark contrast to 2020, which, for Craig – and millions of other school leavers – was supposed to be filled with exciting opportunities in faraway places. Instead, the pandemic and the subsequent lockdowns kept her indoors at her home in Chew Valley. It was while she was there that she decided to pen her memoir.

Somehow, in no way bitter about her thwarted plans, the twitcher explains that she very much enjoyed the writing process. “It was actually a really lovely experience because there’s so much about travel and birds from around the world in the book; it felt as though I was still travelling while locked in my house.”

Birdgirl – which refers to the nickname the author adopted when she started her popular blog of the same name in 2013 – details Craig’s unconventional childhood, her incredible birding adventures with her family and her life-long love for birds that, for Craig, was cemented at nine-days-old.

“We went to see the Lesser Kestrel in the Isles of Scilly and my parents have this lovely picture of very new-born me with my eye pressed up against a telescope. When I say I have been birding forever, I mean it.”

Craig brilliantly recounts her experiences from all four corners of the globe, sharing the moment when she first saw a Yellow-headed Picathartes in Ghana and a Spoon-billed Sandpiper in the Bolivian Amazon. Throughout the book, she details the unique qualities of the birds she’s seen, pairing them with beautiful illustrations.

As the book continues, however, it becomes evident that Craig’s trips were more than just satisfying a hobby. The family didn’t know it at the time but Craig’s mother had bipolar; a diagnosis that wasn’t given for many years. Craig writes: “Was she always going to be like this: energetic, happy and essentially Mum one week or month or year, and despondent, unfocused and miserable the next?”

I wonder how it was for Craig to write about her family and their journey. “It was while I was sketching out the plans for the book when I realised that it was going to become much more personal and family-oriented than I originally realised. I sat down and talked to my mum and dad about it and asked them, how would you feel if I put all of this stuff about us in the book. I think my mum in particular was really enthusiastic in that she felt that telling a very honest, raw story would be really important and really helpful.

“Something that was important to me as I wrote the book was that her mental illness wasn’t portrayed as this terrible awful thing; it’s just something that’s part of our lives. It’s not about us finding this magical cure and living happily ever after, it’s just about us as a family learning to deal with it and doing so quite successfully through birdwatching and the healing power of nature.

“At first, we weren’t consciously using birds to help ourselves, it was just our hobby. Just before my mum was sectioned when she was quite unwell and we went away to Ecuador, I think my dad had this light bulb moment where he realised that this really helps us, this is really good for us and he started making much more of a conscious effort to use birdwatching as a way to help us as a family.”

In terms of looking back at the early days of Black2Nature, a Visible Minority Ethnic (VME)-led charity that Craig set up when she was 14, running nature camps, organising race equality conferences and campaigning to make the nature sectors ethnically diverse, Craig says her rising popularity all seemed quite normal at the time. Her thoughts today: “That was crazy,” she says with a laugh.

“It’s not about us finding this magical cure and living happily ever after, it’s just about us as a family learning to deal with it and doing so quite successfully through birdwatching and the healing power of nature.”

Research has shown that 40% of people from Black, Asian and Minority Ethnic (BAME) and Visible minority Ethnic (VME) backgrounds live in places which are the most green space-deprived in England. Craig has previously stated that the nature sector is two or three decades behind in terms of diversity. I wonder whether her memoir offered an opportunity to look back at how far society has come in the seven years since she launched Black2Nature?

“I think it’s still very behind in a lot of ways but it is slowly getting better,” she explains. “That was one of the nice things about writing the book because actually, looking back, things have changed a bit more than I thought they had. I think there’s still a massive way to go and they’re still incredibly behind in terms of diversity and engagement but the biggest change has been in attitude.

“When I started, people were incredibly resistant to what I was talking about in terms of highlighting the fact that there was racism within these spaces. I think that made a lot of people really uncomfortable. Now, especially post-George Floyd’s death, which I think was a big reckoning for some people in terms of their own relationship with racism, it feels like there’s been a lot of attitudinal change.”

An attitudinal change that has been driven by the next generation of leaders, perhaps. I ask Craig, who spoke alongside Greta Thunberg at College Green when thousands of Bristol students skipped school for the climate strikes, stepped on stage with Billie Eilish at her climate-focused event Overheated, and joined Emma Watson at COP26, whether she is optimistic about the future.

“There is this narrative that young people don’t care about things and it’s not true – I’ve never seen people more passionate than the young people I know who are engaged in the climate movement. They are giving their whole lives to try and make this planet slightly better and slightly healthier. I think young people are incredibly passionate and they have made such a difference already. I think back to the climate movement pre-Greta Thunberg and pre-Youth Strike 4 Climate and it was just a completely different world – climate change just wasn’t major in the way that it is now.

“It is so exciting seeing various people use their platforms to try and evoke change. It’s exciting; it feels like it’s a time for change. I feel incredibly privileged to have been given these opportunities.”

Birdgirl is packed with beautifully written anecdotes and carefully crafted reflections on life. Poignantly, Craig writes: “Birdwatching has never felt like a hobby, or a pastime I can pick up and put down, but a thread running through the pattern of my life, so tightly woven in that there’s no way of pulling it free and leaving the rest of my life intact.” Asked what it is like to find such joyful moments of escape throughout days spent in concrete jungles, she tells me: “I am literally watching birds out of my window right now. It is something that I’m always doing. Part of the reason why I love birds is that they are everywhere. As soon as you start looking, you’ll see something flying around. I am constantly watching birds and constantly thinking about them – it’s a really lovely way to live your life.”

Whether you’re a bird fanatic or just enjoy watching the gull chicks fly the nest on a neighbouring roof, the book is accessible for all. As my conversation with Birdgirl comes to a close, I know one thing is for sure; not all heroes wear capes.

Birdgirl by Dr Mya-Rose Craig is available to buy at all good bookshops.

Previous
The Power of The Sisterhood: Refugee Women of Bristol