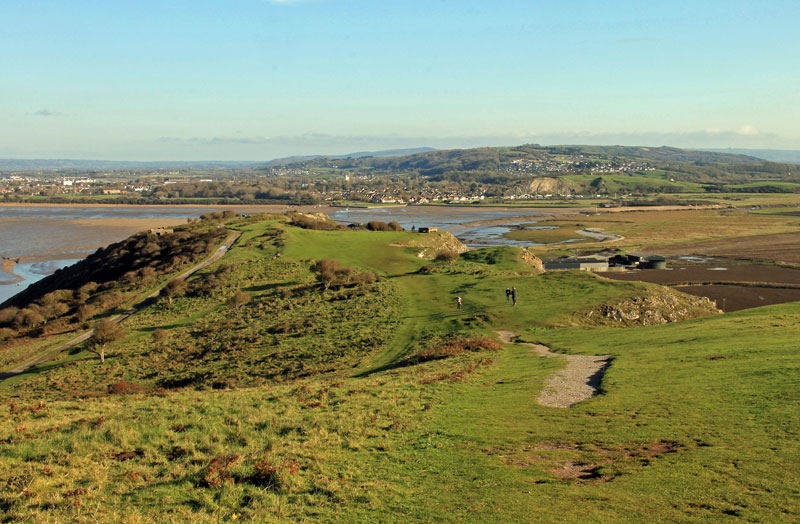 Looking for a new walk to blow away the cobwebs? Andrew Swift takes us on a journey to Brean Down’s breezy heights and finds, just as renowed travel writer S.P.B Mais did in 1938, “infinite riches in little room”…

Parking: National Trust car park, Brean Down (ST296585; TA8 2RS): £4.50, NT members free.
Facilities: National Trust Café and toilets by the car park.
Map: OS Explorer 153
Good to know: Unless you intend to stick to the old military road, good walking shoes are essential. Young children also need to be supervised and dogs kept on leads. There are sheer drops from cliff edges near the path, the down is overrun with rabbits and several dogs a year die after chasing them over cliffs. There are miles of sand for dogs to run free along after visiting the down. The fort – while it may appear like the ultimate adventure playground – also has many high walls and safety hazards to be aware of. Due to the narrowness of the steps, a one-way system is currently in operation. Visitors can climb the steps up to the down, but are asked to return along the old military road.
For further information, visit: nationaltrust.org.uk/brean-down

As the crow flies, Brean Down lies 20 miles south-west of Bristol. Whichever way you choose to get there – unless you intend to fly – the last part of your journey involves heading due north, past a succession of chalet parks, with what looks like an island rearing up ahead.

Between around 5000 and 2000 BCE, when sea levels were higher than they are today, Brean Down was indeed an island. For the moment, however, although it’s cut off to the north by a muddy estuary and lies stranded amid marshy moorland, you can still reach this outlier of the Mendip Hills overland.

Even so, it’s very much a place apart. When you reach the end of the road and pull into the car park to continue on foot, the path soon ends at the bottom of a steep flight of steps zigzagging up the cliff.

There is another way to reach Brean’s breezy heights, by turning inland along an old military road which swings round the back of the down. There are even a couple of mobility scooters which can be hired to approach the down this way. But, if you can, you should go for the steps, as the views at the top are stunning – eastwards to the clifftop church at Uphill, southwards over miles of shining sands, and northwards over Weston Bay.

On a clear day, the long, low white line you can see on the Welsh coast 18 miles away is Llanwern steelworks. What you can’t see, though, is the tip of the headland, as the land continues – gradually but relentlessly – to rise, and you won’t discover what lies at the far end until you’re almost upon it.

There is much else to discover, however. Turn right for a few metres, and you’ll discover a World War Two gun emplacement. Beyond it lies a large concrete arrow embedded in the turf, installed around the same time to direct trainee pilots towards bombing ranges on Brean Sands.

A little further on is an abandoned building, its windows barred, a warning notice posted, which looks as if it too might have a military provenance. Its story, though, couldn’t be more different. In 1912, a local naturalist called Harry Cox persuaded the Royal Society for the Protection of Birds to buy the shooting rights to Brean Down so that they could ban shooting there.

This made it one of England’s earliest bird sanctuaries, and when Harry Cox was appointed its warden he built himself this house so that he could enforce the ban. And here he stayed until his death in 1949. To the right of his house are the earthworks of an Iron Age hillfort, and, as you turn to head west along the down, you pass
a Bronze Age round barrow and the site of a Roman temple. After around 500 metres, when you reach the first summit, it is worth turning to take in the view back toward Uphill and the Mendips. From here, you can see the whole expanse of the down, with its few trees leaning inland away from the prevailing wind.

As you continue, the track descends before climbing past a series of ridges which formed part of a medieval field system. The next summit, marked by a trig point, is Brean Down’s highest – 97 metres above sea level. A little further on, as the land shelves away, the headland finally comes into view far below, dominated by the ruins of a vast 19th-century fort.

As you head down to it – with care, because the track is steep and slippery – you pass a more recent ruin: a World War Two observation post, looking like the lair of a Bond villain or something transplanted from Tracy Island, with its dim, damp interior commanding views of the channel approaches. It makes a suitably atmospheric introduction to the fort itself, built between 1864 and 1871 due to fears of French invasion. A dry moat protected it on the landward side, while treacherous rocks, reefs and riptides made it all but impregnable to attack by sea. The invasion never came, but on 18 May 1897 the fort was the first place in England to receive a wireless message – from Lavernock in Wales, courtesy of Guglielmo Marconi.

Just over three years later, in the early hours of 4 July 1900, a gunner stationed at the fort discharged his carbine down a ventilator into a magazine packed with 5,000lb of gunpowder, blowing himself and a large part of the fort sky high. His motive was never established, but, instead of being rebuilt, the fort was decommissioned and later became a café.

The army returned in World War Two. New gun emplacements were built, and the fort became a testing ground for experimental weapons. A short railway track leading to the edge of the cliff is the legacy of an ill-fated attempt to launch an experimental bomb by loading it onto a trolley which was then propelled along the track by rockets at around 200mph. The idea was that, when the trolley hit the buffers, the bomb would be catapulted far out to sea. Unfortunately, the trolley ripped through the buffers and the whole caboodle – buffers, trolley and bomb – headed out to sea before swinging back inland and destroying a farmer’s chicken run.

Although the construction of the fort is the biggest thing to have happened at Brean Down, it would have been put into the shade if a plan for a transatlantic port had gone ahead. The Brean Down Harbour Company was formed in 1861, with a capital of £350,000. Brean, the promoters claimed, was better situated than Liverpool, Plymouth or Southampton. The problem was that, whereas they had large harbours, Brean stood on a rocky coastline. A massive breakwater was planned to overcome this difficulty, but after its foundations had been laid – and swept away in a storm – the scheme was abandoned.

Today, Brean Down is owned by the National Trust and designated both an ancient monument and – because of its range of rare plants – a site of special scientific interest. When the travel writer S.P.B. Mais visited in 1938 and was shown round by Harry Cox, he described Brean Down as “one of the most worthwhile hills in England”, with “infinite riches in little room”. His words ring just as true today.