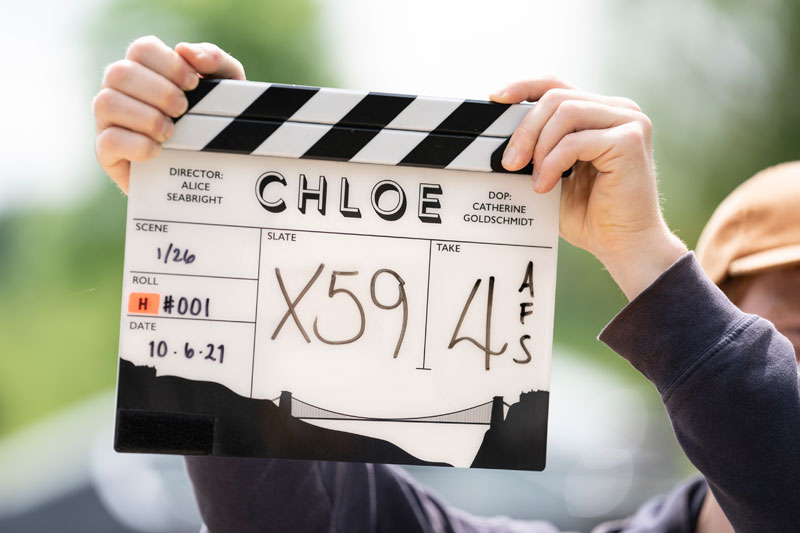 Creative Collaboration: in conversation with Goldfrapp’s Will Gregory

After much anticipation, the locally filmed BBC One psychological thriller, Chloe, is coming to our screens on 6 February. Maintaining the city links, Bristol-born Will Gregory (Goldfrapp) has collaborated with Portishead’s Adrian Utley to produce an outstanding original score. Melissa Blease discovers more…

“Where am I at, in my life? There’s been quite a lot of it so far, I suppose; it tends to get filled up.” Filled up? Musician Will Gregory is, it seems, a master of the understatement.

Goldfrapp, film soundtracks and operas. Collaborations with Tears for Fears, Peter Gabriel, The Cure, Portishead and Michael Nyman. Scores for BBC TV’s Serengeti and the National Theatre of Scotland’s James III trilogy; his very own, highly-acclaimed Moog Ensemble; the well-worthy recipient of an Ivor Novello Inspiration Award… and, coming soon to a small screen near you, Alice Seabright’s six-part psychological thriller, Chloe: a BBC One and Amazon Prime production, filmed in Bristol, premiering this month, and featuring a Bristol-centric sound track led by Will himself.

But before we talk all things Chloe-related, I have to ask: where did that filled-up life start filling up? Having grown up in London, Will moved to Bristol in his late teens, and lived here throughout the 1980s and early 1990s. But long before his Bristol years, he was already writing the score for his future.

“I played the piano up until I was around 11 or 12, then I started playing the oboe,” says Will. The oboe! Crikey. “But at the same time, I listened to a lot of commercial music – I loved the Beatles, and I remember getting really excited the first time I heard jazz, and then World Music. As a youngster I was in orchestras, which was a bit like being in the army: in an orchestra, you just follow orders. I think there’s a particular type of person who does that brilliantly, but I don’t think it’s me. So I took up the saxophone when I was at college, and started to rebel against the whole orchestra ‘thing’. At the time, everybody from The Specials to Spandau Ballet seemed to have a sax player in their band – it was kind of endemic, so it turned out that I’d got in at the right time.”

As it turned out, Will got into living in Bristol at the right time too. “Moving to a city where people were just making music on the spot was a very liberating experience, for me – and such a different culture,” he recalls. “There was no kind of top-down musical direction because there were no music colleges in Bristol, and no orchestra to join, so a lot of the people who made music did it based on a kind of received music education, which I think Bristol both suffered and gained from, the gain being that the city’s musicality flourished in a kind of unguided way, and created some of the most amazing sounds. But it was a shame for the people who wanted a bit of input and guidance, and wanted to know how to play their instruments properly. I felt that I really benefitted from hitting the scene already knowing how to read music; if someone said they needed a brass arrangement, I could do that, and that formal musical literacy proved to be really useful.”

And Will had great fun being ‘useful’. “After living in London where just keeping a roof over your head and and keeping yourself fed meant that you didn’t have room for anything creative, Bristol was a great city to be unemployed in,” he says. “You could walk around everywhere, and go to Dot’s Cafe and have a 3-course meal for a couple of quid. And of course, it had a music scene that I became a small, outlandish part of, which was all very exciting. The bands that immediately spring to mind are Rip, Rig and Panic, and Pigbag – I knew some of those guys, and played quite a bit with them. And then I got friendly with a lovely guy called Pete Brandt, and we had a group called Loggerheads – that was really good fun. We used to rehearse at the Startled Insects rehearsal studio in Redland Road, where everyone used to hang out. It was a kind of permanent party, really; it felt like there was a culture of people just having a great time doing creative things. It was the era of The Young Ones, and everyone was living in a squat, and we were all poor, and times were tough, but really good. Today, it’s as though everybody – young people in particular – is trying to get on to some kind of lifestyle ladder that simply wasn’t there then… if indeed, it’s really there now? I was definitely lucky to spend so much of my formative years in that kind of collaborative environment.”

Establishing fruitful creative collaborations turned out to be something of a recurring theme for Will, throughout his career – and, given what he’s already shared with us about both his back story and his own creative processes, it comes as no surprise to learn why Chloe held such appeal for him, nor how he worked on writing the score.

“I loved the Chloe project because it has a really strong connection with the Bristol scene and it feels home-grown,” says Will. “Once I got the ball rolling with various ideas for the music it was very much a collaborative venture, which I love. Everybody on the team, particularly creator and writer Alice Seabright, was musically sensitive, so quite a lot of the time we were throwing spaghetti around and seeing what stuck! And Alice was great. She has strong opinions, and a strong sense of direction. To begin with, we just exchanged ideas; I sent a bunch of tracks that I thought might be appropriate whether it was Serge Gainsbourg or Ennio Morriconi, and there was a real lingua franca between us. It’s very difficult to talk about music in the abstract, so you go through a lot of soul-searching – you don’t know, until you put it up against the visuals, what is or isn’t going to work, but the process was fascinating.”

Is Will able to share any of the end result of that process with us? “Without giving any spoilers away, it’s quite a tragic drama,” he says. “It’s a questionable process, you might say – quite sinister – I’ve never seen anything like it. But I deliberately didn’t read the script for the last episode or watch it until I’d watched the other five, because I really didn’t want to know what happened, and I wanted to be as surprised as everybody else. All I can say, though, is that Alice is a master of plot, and detail; she’s amazing, and the casting [including The Crown’s Erin Doherty as Becky alongside Jack Farthing, who many of us know and love as Poldark villain George Warleggan] is amazing as well.”

Okay Will – we’re hooked! But I have to ask: has Chloe kicked Goldfrapp to the kerb? “Oh no, very much not!” says Will. “Both Alison and I have been temporarily sidetracked by several projects, which is really healthy. We did seven albums back-to-back over 20 years and we had a tour lined up before the pandemic which we had to cancel, for obvious reasons. But yes, we are still Goldfrapp!”

And in the autumn of last year, that particular collaboration received formal, official recognition when Alison and Will collected their Ivor Novello Inspiration Award which aimed to ‘celebrate peer recognition for excellence of Goldfrapp’s songwriting catalogue and, in particular, how they inspired the creative talent of other creators’. Phew, that’s quite the coup!

“Oh, that was lovely, it really was,” says Will. “Even going to the ceremony was quite a remarkable thing in itself, as it was the first time we’d been allowed out after lockdown. There must have been about 1000 people all together at this sort of long, boozy lunch; we were all a bit rabbit in the headlights, I think. When they played our music, it was a bit like being dragged back through the last 20 years, seeing and hearing all the stuff that we’d done, and watching our life compressed into five minutes. And to find out that our peers had all been aware of our work, throughout it all – it was quite intense, and very emotional; even Daniel Miller, our record company head at Mute Records, was quite weepy. It was wonderful.”

Will Gregory: collaborative genius… and inspirational, influential superstar in his own right.

The first episode of Chloe will premiere on BBC One (and on BBC iPlayer) from 6 February. The six one-hour episodes will also air on Amazon Prime Video worldwide.

Featured image: filming on the set of Chloe, photograph by Luke Varley