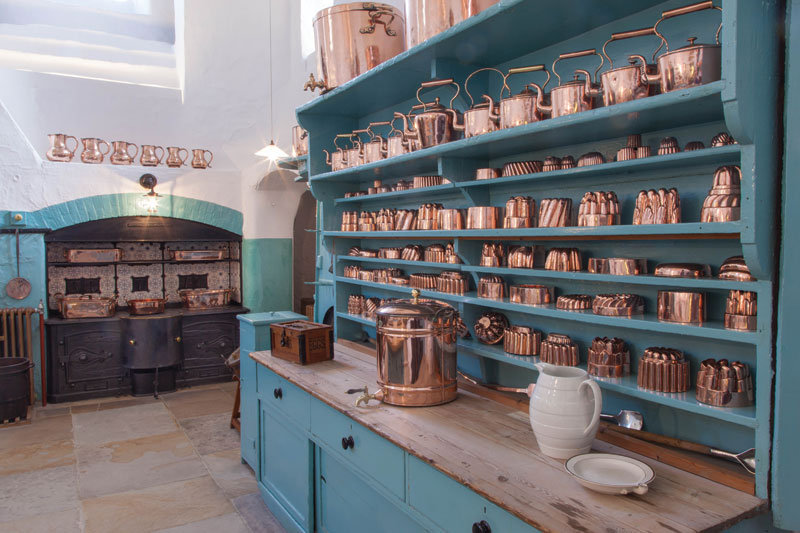 They say you never get over your first love and, in my case, they were right. My first love was – and remains – the country house kitchen. Even after forty years, the very sight of a black-leaded kitchen range or gleamingly polished copper turbot kettle still has the power to send me giddy with excitement. As with all true loves, the path wasn’t always smooth. For many years, even in so-called enlightened circles, mine was a love that dare not speak its name. Thankfully, things have changed since those dark days and now a great many country house kitchens are open to an admiring public, intellectual snobbery has been cast aside and I can be out and proud.

The look of a country house kitchen is eminently transferrable (in condensed form) to the modern home, and, as countless magazine articles touting the attractions of a “traditional” kitchen will testify, it’s a look many of us hanker after. The Aga might have replaced the range, which most people, understandably, run a mile from due to the hard labour that is required to keep them in good order, but the kitchen’s essential elements like stone floors, whitewashed walls, and scrubbed stout kitchen table (updated as the island unit) remain a potent draw.

What is it about these great cavernous spaces that make them so appealing? For me, it’s the sensory aspect that really fires my imagination. To step into the kitchen of one of the great country houses is to enter a space which is part cathedral, part factory with high ceilings and huge windows, flooding the room with light. There’s also something deeply satisfying about the utilitarian aspect of these rooms that speaks to the current vogue of all things contemporary, which explains why no less than the late Terence Conran was a fan. The strict minimalists amongst us may recoil at the idea of copper saucepans en masse but look again at the plain walls, the quality of light afforded by those aforementioned windows, the simple, robust scrubbed elm tables and shelves and I think even you’ll see what I mean; there’s an austerity which should seduce the most ardent modernist. Then there’s the equipment, the Batterie de Cuisine of country house legend, probably the most powerful component of the classic image that we all have of a bustling kitchen. We picture the cooks and kitchen maids surrounded by rows of burnished copper pans, pots and kettles – all monogrammed with a coronet and numbered so that each piece could be returned to its correct position after use – and all the other apparatus demanded by Victorian haute cuisine.

I’ve heard it said that once you’ve seen one kitchen, you’ve seen them all. Well, I suppose you could argue that once you’ve seen one Gainsborough you’ve seen them all, but it’s simply not true. Some kitchens the result of a grand plan, others come together over time, with each generation making their mark. Right from the moment the castle morphed into the country house, the kitchen was its very nerve centre. The great landowners of Henry VIII’s reign had vast retinues, sometimes running to several hundred, and the ability to feed them and to provide a high standard of hospitality to guests was a critically important way for a Lord of the Manor to maintain his position in society. But, in order to understand the country house kitchen as we know it, we have to look to the 19th century and the Industrial Revolution. The era of Byron and Jane Austen saw technology advance at break neck speed and the kitchen became a showcase for the technical innovations that were transforming the country: cast-iron, copper, coal, steam power and gas lighting – all found some of their earliest domestic uses in the industrial scale catering demanded by country house living.

This investment in the latest technology had a purpose. Like their medieval forebears, Regency and Victorian aristocracy had a reputation for hospitality to keep up. As transport links via road and railways improved, the country house party, where fashionable society decamped from London for a long weekend to shoot, smooch and eat copious amounts of food, became the benchmark of quality.

It was in the country houses of Victorian Britain, not in restaurants or hotels that the finest food was served. And don’t believe the myth about the British not knowing anything about good food until Elizabeth David arrived on the scene. Before World War I and for a hundred years previously, fine British food enjoyed an enviable reputation abroad, even though, admittedly, the chefs that made it were mostly French.

It wasn’t just the emphasis on quality that gave us these incredible rooms. The kitchen was the power house that kept the Victorian country house running and the quantities of food they produced could be prodigious. It wasn’t just the family in the dining room that they had to cater for; there were the children and staff in the nursery as well as older children in the school room. Then there were the servants. Typically a large country house would have to accommodate a live-in staff of 30 to 50. The more junior servants (usually those who wore a livery) ate in the Servants’ Hall, while those of more senior stature – the butler, valet and housekeeper – had their meal in the housekeeper’s room in a style more suited to their status. The kitchen staff ate separately in the kitchen, in the short gaps during their working day.

When guests arrived for a house party, they would bring their own valets and ladies’ maids and the numbers would swell. All these meals would need to be served punctually at different times, the planning doesn’t bear thinking about. There’s a very good reason why most kitchens have a very large clock on the wall. The kitchens at Petworth House produced 30,000 meals a year and the equipment, not to mention the staff, had to be equal to the task.

The country house kitchen was – and is – a thing of wonder. I encourage you to seek them out and when you encounter an Edwardian Eagle kitchen range or a beautifully burnished Bain Marie – rejoice!

Next
Nuffield Health: getting you back to your winning ways
Start typing to see results or hit ESC to close
bristol gender film tv history
See all results