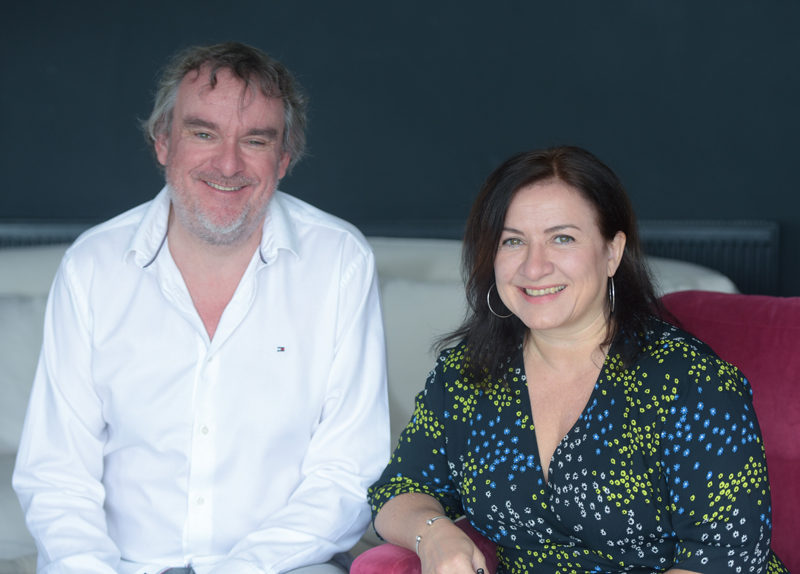 A new production company has launched in Bristol. At the heart of it are the writers who have arguably changed the face of TV with their multitude of cult classics. Millie Bruce-Watt chats to Matthew Graham and Emma Frost about their latest venture, which is brimming with epic escapism

The television and film industry is a major part of Bristol’s economy and its creative force is tightly woven into the fabric of the city. The BBC’s Bristol headquarters consistently produces internationally renowned, high-quality British programmes and its iconic Natural History Unit sits at the centre of ‘Green Hollywood’, the world’s largest concentration of firms producing wildlife content. Channel 4 has recently opened its Creative Hub in the city, The Bottle Yard Studios continues to attract big name talent and, of course, Aardman has been inspiring animators around the world for nearly 45 years.

Now, as the industry roars back into action, we are proud to welcome television royalty to Bristol. From the writers and showrunners who brought us The White Queen, Life on Mars, Ashes to Ashes, Doctor Who, Shameless and The Man in the High Castle comes a brand new drama production company with a slate of powerful new projects.

Matthew Graham and Emma Frost have teamed up with the US’s Legendary Entertainment to launch their own company, Watford and Essex. Legendary – a film production and mass media company – are responsible for TV and blockbuster hits, such as Jurassic World, BlacKkKlansman, Mamma Mia: Here We Go Again and Interstellar, to name but a few. This partnership simply means one thing: a plethora of transportive storytelling will soon be pouring out of the city gates.

Having spent the last three years living and working in Los Angeles, Matthew and Emma are returning to the UK poised and ready to unleash their masterful creations onto international audiences. We speak to the writers to find out what they have in store for us and why Bristol is the best place for their next chapter.

“We have big, exciting projects coming,” says Matthew. “One of the things that has been great about teaming up with Legendary is we have access to some of the IP that they own. They have Legendary Comics, for example – one of their comics is called Championess, it’s a really cool show about female bare-knuckle boxing in the 1700s and it has this really strong female protagonist so we’re really excited about that.

“We have fantasy shows that we’re developing from their television side, old shows that we’re bringing back with a massive new modern twist, like Land of the Giants and Voyage to the Bottom of the Sea, but we’re also focusing a lot on the terrestrial market, shows that we know could work really well for ITV and the BBC and Sky. They could range from thrillers to family dramas to medical dramas so we’re really right across the board with all sorts of things. We’re very fortunate that we have Legendary behind us.”

The South West has not only been home to Matthew for most of his adult life but the city has been highly rated by the writers for its ability to morph into the ideal backdrop for varying genres.

“One of things that we love about basing productions out of Bristol is that we have a huge diversity of locations. We can film period drama incredibly well in the West Country but we can also film series like Skins, really relevant modern shows. We have access to fantastic crews.

I love filming in the West Country and always have done and it’s partly because of where it’s based – it’s a brilliant place to be set up, to be creative and it’s a great city to film in and to film around,” says Matthew. “Having lived in LA for three years, we still prefer Bristol,” they joke.

As companies continue to pick up productions in a very different world to the one in which they left off, it will be interesting to see how the industry will reflect this moment on the big screen. Matthew and Emma both believe that what television needs at the moment is not to hold a mirror to society but to offer post-pandemic audiences an opportunity to be whisked away from reality.

“We want to move on and tell fresh stories – I’m not entirely sure the world wants to relive the pandemic over and over again in television drama,” says Matthew. “If you look back at the Spanish flu in the 1920s, the world said, ‘Let’s have Charlie Chaplin, Laurel and Hardy, Douglas Fairbanks Jr.’ I think, if anything, what television needs now is to offer people joy and excitement and fun – that doesn’t mean not telling serious stories but it just means I think there will be a huge resurgence in magical realism and romance.”

“I know Covid has been a big part of everyone’s lives but let’s leave the mundane and have some fun and escapism,” adds Emma.

As writers, Matthew and Emma have never shied away from bold, genre-bending storylines and have always pushed the envelope in terms of fearless creativity. Their new venture is set to be no different.

“Matthew has been breaking every rule before it became the norm,” says Emma. “The most notable story was Life on Mars – early on in Life on Mars’s journey, Matthew was told that not only was the network not going to make it but that he shouldn’t make it. No one should make it because this was the kind of show that ruins careers. Happily, the BBC saw past that and said, ‘No, this is brilliant – we’re going to make it’ and, as we know, it was a game-changer. It totally changed the face of television and it’s one of the biggest cult shows of the last two decades. For Matthew, he’s always been about being bold and taking risks and, for both of us as well, when you’ve lived in America and when you’ve been a part of the international world of television and been influenced by that, it makes you realise that there are no boundaries. Incredible television is made in the UK but I think it is still only just aligning itself with the international marketplace and I think, for us, this is exactly the right moment to be back here because we are bringing everything we’ve learned from our travels and we are bold and brave and we don’t want to make anything that feels safe.”

One of the duo’s most recent hits was The Spanish Princess, which wrapped on the final day that filming was permitted before restrictions came into force in March 2020. The post-production was subsequently completed during the first lockdown and premiered in October. Despite the obstacles, however, the show was an incredible success. Most notably, it gave an accurate account of history and reinstated women and people of colour to their rightful place in the story.

“We’re trying in a tiny way to redress the balance and show something that is actually accurate,” adds Emma. “Two thirds of our shows have female protagonists and we’re working with a high number of writers from different backgrounds – that’s partly why we’re so excited about sharing these voices and stories that we haven’t heard before.”

With so many new projects on the horizon, there is no doubt that Matthew and Emma will continue to enrich our lives with their sheer brilliance. As the country continues to open up, allowing for more locations to be used for filming, we look forward to seeing the city brimming with life once again.

In the meantime, however, for Emma and Matthew – and undoubtedly the other 400,000-odd or so Bristol residents, only one thing is on their minds – an icy cold pint at the pub. “There are some fine pubs in Bristol and we plan to visit every single one,” they joke. “A big shout-out to The Portcullis.”

Keep up to date with Watford & Essex on Twitter: @EssexWatford