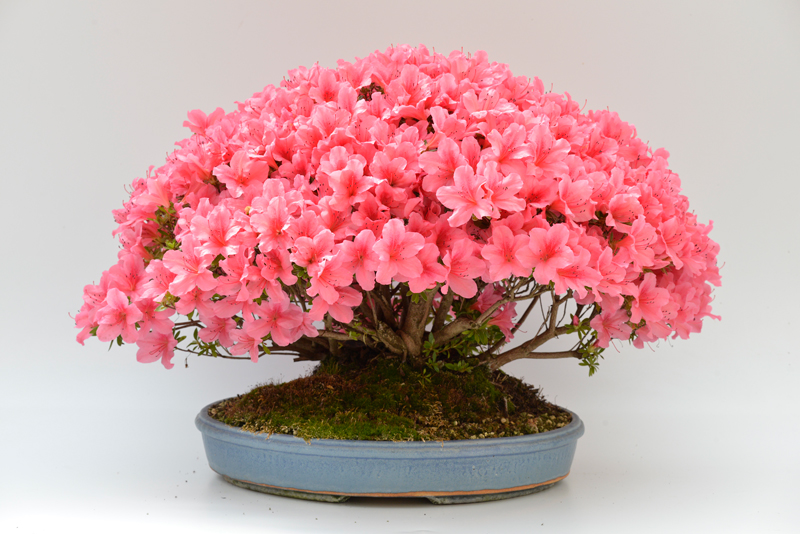 Finding the balance: the art of bonsai

As many of us continue to turn to nature as a source of solace, Millie Bruce-Watt asks two of the city’s bonsai specialists – including the former expert of the RHS Chelsea Flower Show – for all we need to know about caring for these extraordinary miniature trees

The art of bonsai has been captivating admirers for over a thousand years. Combining horticultural techniques and Asian aesthetics, the level of meticulous skill, patience and care required to achieve the desired styles has made it one of the world’s most sophisticated art forms. Nowadays, not only are bonsai trees part of a lucrative industry, they are also greatly treasured by hobbyists due to their striking beauty and the enriching experience of caring for them.

Over the past year, as we tackled pandemic fatigue and turned to nature as a source of solace, many have cultivated mindfulness through bonsai care. The trees’ astonishing simplicity is symbolic of harmony and peace. In a world of instant gratification, the art of bonsai demands our patience – we watch on as these wizened trees make minute advancements, eventually over time creating the image and shape we have in mind for them.

As interest continues to grow, we speak to the city’s bonsai connoisseurs to learn more about the ancient art form and discover the best advice for aspiring artists. Meet Dan Barton, former bonsai expert at the RHS Chelsea Flower Show and founder of the Bristol Bonsai Society, and Jon Short, owner of Bristol Bonsai, the city’s only bonsai specialist.

Born in Hong Kong in 1938, Dan has spent the past 52 years learning, practising and teaching the art and philosophy of bonsai. He first acquired an interest in the art in 1969 and taught himself how to master the tradition’s varying styles. He is a qualified art teacher and spent many years working as senior lecturer at the University of the West of England before becoming head of the photography department. Dan eventually took early retirement and set up an educational service in bonsai, involving workshops, masterclasses, lectures and residential courses, which he ran for many years. When creating his miniature trees, he has been able to draw on his background in all the various aspects of the visual arts.

Dan has been at the forefront of the global bonsai movement. For over 25 years he served as a bonsai judge at the Chelsea Flower Show and numerous other Royal Horticultural Society shows around the country. He received three awards, including the major award in 1989, for photographs of bonsai trees exhibited at the International Bonsai and Suiseki Exhibition in Osaka, Japan. Following his success, Dan was added to the British Bonsai Roll of Honour (by FoBBS) for contributions to the furtherance of bonsai in the UK and was honoured in 2006 with the Association of British Bonsai Artists’ ‘Most Prestigious Award’ for his contribution to British bonsai.

“I first saw bonsai as a child in the markets in Hong Kong and I was fascinated by them but never thought for a moment I’d be able to do it,” he tells me. “Years later, I was eventually persuaded by a student friend of mine at UWE, who kept pressing me to make a start in bonsai. Finally, he bought me a couple of trees and, basically, I just picked it up – from growing twigs in a pot to growing more sophisticated stuff. It’s been very interesting and I’ve been all over the world as a result.”

Dan founded the Bristol Bonsai Society in 1975, having left a note on a trader’s stall at the Downs flower show. “There was a lot of interest,” he says. “At that initial meeting, 18 people attended and it just grew from there. Bristol has always enjoyed a very good reputation in this country as being one of the leading societies.” Since its first meeting, the society has accumulated hundreds of members over the years, with a group still meeting regularly to this day (Covid-permitting).

More recently, Dan – an unceasing creative force – has turned his attention to making handcrafted stoneware with his wife, Cecilia. Marrying the pot to the tree, like a frame to a picture, Dan ensures the colour of the glaze complements the bonsai’s ever-changing seasonal hues. “The availability of bonsai pots in the country is very minimal,” he says. “There are very few people importing from Japan so I was using anything from the tops of jam jar lids to yoghurt pots and ovenware – anything I could get my hands on. I thought, well, why not try making my own? That’s how I started. I joined the adult art department at the RWA down in the basement using the facilities there and it’s grown and now I’ve probably made several thousand pots – and every single pot is different.

“It’s great fun working with clay. The pots are mostly these days commissioned for bespoke pots. Someone says they have a particular tree and they say, can you make me a pot for this tree? That is always challenging but very, very interesting.”

Bonsai is a Japanese art form that grew out of the Chinese art of Penjing over a thousand years ago. As the world opened up, the tradition became increasingly accessible to Western and world audiences. Although different techniques have evolved over the course of bonsai art history, the respect and admiration for nature remains at its core. More than a thousand years after the art was first developed, the bonsai artist still seeks to emulate the inherent shape of the tree as it battles nature’s elements.

For those looking to get into the hobby, Dan’s advice for beginners is simple. “Join your local society. You’ll find that bonsai people are very friendly and very helpful. This hobby requires patience, you can’t rush bonsai. I’ve been working on trees for 40 years that still haven’t realised the mental image I have for them.”

Bristol Bonsai owner Jon Short learned his skills from his uncle and at the Bristol Bonsai Society before setting up his own business four years ago. Today, he runs a small, family-run enterprise, buying and selling trees, pots and all things bonsai for everyone interested in the art – from beginners to experienced enthusiasts. Jon also holds one-to-one classes either at his studio or in the comfort of your own home, guiding people through the techniques and introducing people to an unparalleled hobby.

Similar to Dan, Jon’s advice is never to stop learning. “Every day is a school day. We just want to get people into the hobby and so we have a lot of very easy trees – a Chinese elm is one of the easiest you can start with. What I generally advise people to do is buy a finished tree so you can learn the trimming techniques and the watering techniques. I would also say go to a garden centre and buy something for £5 or £10, that way you can see it grow, you can watch it develop and if something goes wrong, you’re not looking at a £300 tree.”

There are 24 individual styles of bonsai – windswept, cascade and double trunk, to name but a few. However, Dan stresses that the most important thing is to love what you’re doing. “Have fun – create your own style – you might try hard to create a windswept image or a forest style and it can be frustrating at times because it takes an awful long time. Just enjoy the journey.”

Dan’s first book on bonsai, The Bonsai Book, was published in 1989 by Ebury Press and has since been re-printed several times. It covers 20 years of research into the practice and philosophy of the art form and provides step-by-step instructions on growing your own bonsai tree. Visit Dan’s website: danbartoncreative.co.uk; follow him on Instagram: @danbarton_bonsai; and subscribe to his YouTube channel: youtube.com