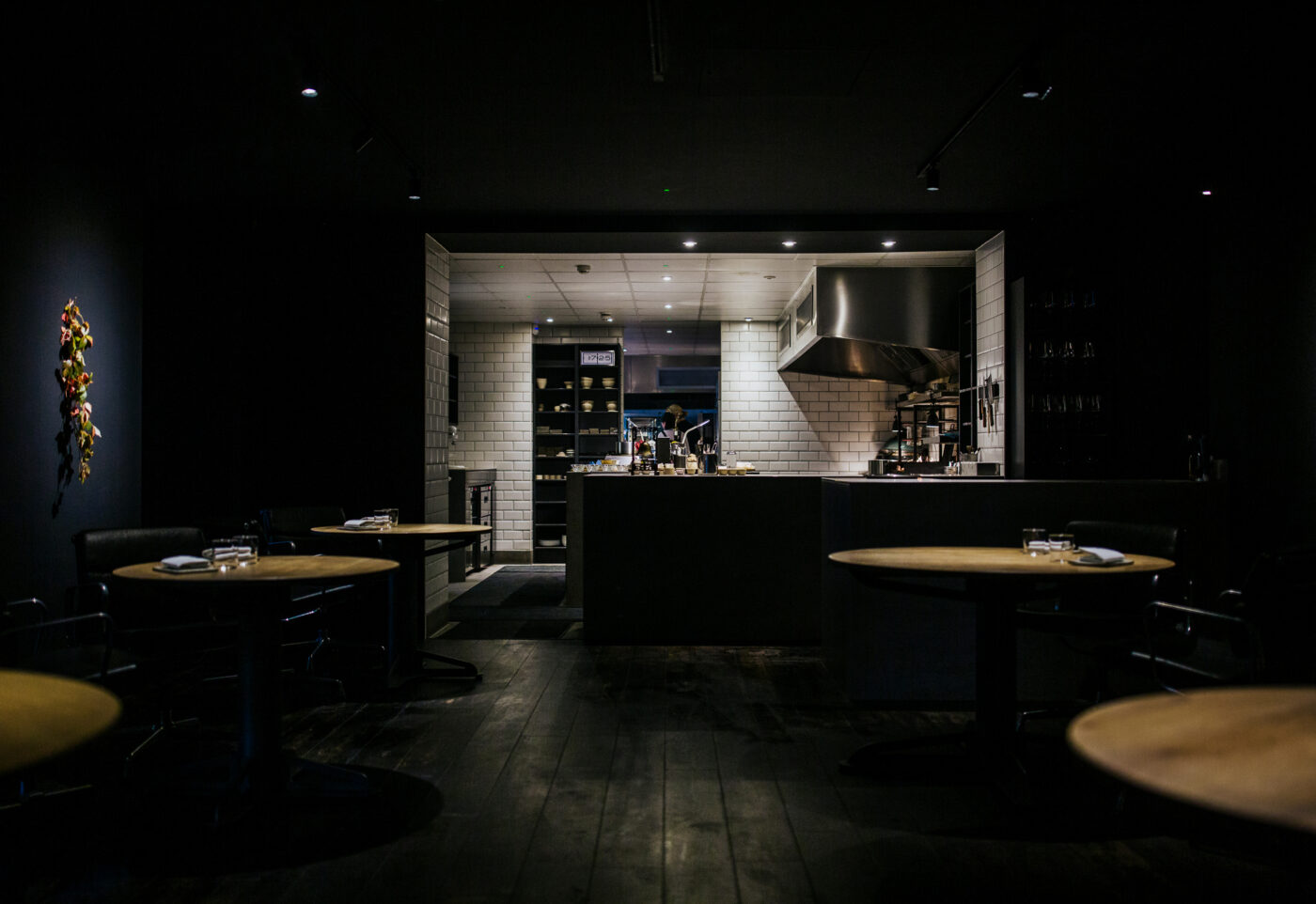 After Zak Hitchman hit the headlines for writing fake reviews of his own Michelin-starred restaurant, Casamia, Melissa Blease sat down with the head chef to learn more about the high-end fine dining establishment that offers dinner and a show.

Black walls, loud music and a candlelit kitchen; smoke in the air, projections flickering hither and thither… and a young head chef who cooks on an open fire – in an open kitchen – cooks like a cross between Marco Pierre White and David Foster Wallace in their ‘glory days’, and recently took to TripAdvisor to leave fake reviews of the restaurant he cooks at. “Only three stars because it was very cloudy that day”, comments included, and “It was a spiritual journey that brought me near to tears”. Zak Hitchman: what on earth is going on at Bristol’s long-standing temple of foodie fabulosity, Casamia?

“Casamia went through a massive change when I took over just after lockdown,” says Zak. “We were forced to close in March 2020, as was everybody else, and re-opened at the start of August. I was offered the position of head chef, my first time in this role, during that lockdown, and I had probably a bit less than weeks to develop the entire menu as a completely different concept. We’ve still got the same name, and a lot of the old team who have been around for a long time are still on board, but what we refer to by the little pet name of Casamia 2.0 is a completely different concept to the original Casamia that everybody was so familiar with.”

And that very familiarity was one of the reasons behind the changes. “Peter Sanchez-Iglesias [who, alongside his brother Jonray – who sadly died in 2015 at the age of 32 – took over his family’s traditional Italian trattoria in 2006 and turned into one of the UK’s most revered, Michelin-starred restaurants] took a very bold step in deciding it was the right time for us to reinvent Casamia,” Zak explains.

“It was still a very good restaurant, and people absolutely loved it. But maybe those people had got a bit used to it and were somehow less excited about it because it wasn’t really at any kind of forefront anymore. We decided that we wanted to make Casamia into a place that we wanted to eat at – and for me, old school fine dining in a quiet restaurant just didn’t hit the spot. We were talking about changing things around a bit before lockdown, but not making any drastic, massive changes in one go, just perhaps making the menu longer, painting the restaurant a different colour – smaller changes over a longer period of time. But lockdown changed everybody’s outlook, in so many ways. We ended up painting the restaurant black and Peter had a massive sound system installed, and then I came in and basically started cooking pretty much everything on fire. We loosely say that the set menu changes with the seasons, but it tends to be more often than that; some dishes have been on the menu since we opened, but we’re refining, adding, simplifying all the time, so it’s difficult to say what a typical dish might be and we ask diners to allow around 3½ hours to work their way through all the courses, so the restaurant is different to other restaurants in that way too. I understand that the ‘new look’ Casamia probably isn’t right for some people, but the people who get it really, really get it.”

Casamia has become much more like a show; you come here rather than go to the theatre,
or a gig. We’re an all-in-one, immersive experience with a light show and projections that are integral to what we do

Given all the changes to Casamia, how come a new name wasn’t thrown into the mix? “We did discuss changing the name but we all decided that we wanted to keep it,” says Zak. “There are no rules around what Casamia can be, and the meaning of the word itself is great! It confuses one or two people who think it’s still a traditional Italian restaurant, but it’s a good name. Also, Casamia has been around for 25 years, maybe longer, and that history is still very much part of what we do. Peter and Jonray’s mum and dad Paco and Sue started it, and they’re still around; Paco is basically retired now but he comes in and says hello to everyone, and Sue is still involved behind the scenes, in administration. I worked really closely with Peter throughout the changes we’ve made and he’s still very much involved, but he’s taken a huge back step and completely trusts us with everything while he gets on with Pi Shop and Paco Tapas and his restaurants in London; I think he’s happy to just have a team of people who are happy to run with everything and make Casamia even more exciting. He’s involved in big decisions but not the day-to-day stuff, and he drops by once a week or so to catch up on what we’re up to.”

But with any changes made to any restaurant (most of all, those with long-standing status on the foodie scene) public forum reviews will, inevitably, offer a mixed bag of opinions on the Big Reveal. Zak: bring us up to speed on the recent TripAdvisor ‘debacle’ that ended up making national headlines.

“First off, let’s just agree that TripAdvisor is a load of nonsense, really,” he says. “Bad reviews – okay, they are what they are. But some of the reviews we attracted were so off the wall they were hilarious, or ridiculous, or didn’t make any sense at all. People who referred to us Casanova rather than Casamia – how does that happen? And others describing the menu as a Bushtucker Trial, or going on and on about the music not being their taste in music – it was all just silliness, really, that we all found pretty funny. So we drew attention to it on our Instagram feed and I posted a couple of crazy ‘reviews’ myself and it blew up from there; first off, the local newspaper wanted to talk to us about it, and then we ended up in The Daily Mail, of all places!”

As for TripAdvisor’s response: “After our investigation, these reviews (and additional content found to be authored by the chef) were removed and the business in question will receive a fraud penalty related to the misuse of our platform.” Gosh! TripAdvisor actually responding to a news story about TripAdvisor – that in itself is quite an achievement. Surely the furore made Zak a tad angry, though? “Not really,” he says, with a shrug. “It was all just too silly for that. We know what we’re doing and we focus on what we’re doing, and we’re not going to change anything just because someone on TripAdvisor has written something daft. The thing is, though, we proved that anyone can write anything on TripAdvisor because we started writing silly reviews of our own, and they didn’t get removed until the day the newspaper features came out.” So the storm in a teacup has, it seems, subsided – for the time being at least. But something tells me that Casamia 2.0 won’t stay out of the headlines for long.

It has to be said at this point that those of us who are keen to experience the changes at Casamia aren’t likely to make a booking on a whim; the set menu (comprising around 20+ courses) costs £180pp without drinks. But it could be said that, given the unique experience that comes as standard, you easily get what you pay for.

“We’ve created a concept that we’re going to go further and further into,” says Zak. “Casamia has become much more like a show; you come here rather than go to the theatre, or a gig. We’re an all-in-one, immersive experience with a light show and projections that are integral to what we do. We’ve had bespoke installations made for us by some pretty cool people who are usually involved in backdrops for DJs and that kind of thing – groundbreaking work by amazing visual arts people. Casamia is a creative place to be, and that obviously suits Bristol because Bristol is a very creative city, and we’re appealing to an audience who want to come out and experience something different. Some of our regular people have come back after the changes and absolutely loved it but others have come back and not enjoyed it at all, and that comes with the territory: the concept definitely isn’t for everyone. But I believe we’ve turned the restaurant into something much more exciting, and importantly much more Bristol; I hope everyone picks up on that.”

Next
XX = innovation: founder of XXEquals Merle Hall on ‘sheconomy’ and women’s design