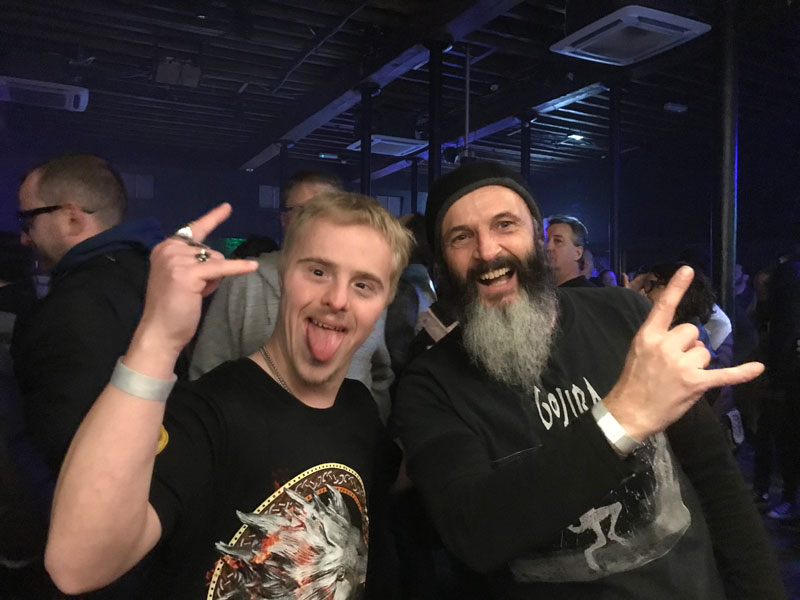 Bristol’s live music venue, Exchange, has recently launched a new befriending service, aiming to make the city’s rich calendar of events accessible to everyone. Here, manager Iwan Best sits down to talk the arts: intrinsic to life and liberty.

A befriending project like no other, Gig Buddies is a driving force for change, tackling loneliness and social isolation while simultaneously reinforcing the message that the arts are an instinctive essential of our humanity – and access to them is a birthright not a luxury.

The brain child of Paul Richards – founder of Brighton-based charity Stay Up Late – Gig Buddies has been enabling people from across the country with learning disabilities and/or autism to have people in their lives who aren’t just paid to be there. Paul was finding that many people were not able to lead full and active social lives due to their support workers finishing at 10pm, meaning they were often having to leave gigs early. He wanted to ensure that person-centred planning truly reflected what an individual wanted to do in their life. Since 2013, Gig Buddies has been matching people with volunteers who share similar interests in music, helping them form meaningful relationships, build confidence and lead a life powered by their own passions.

Bristol is now the 12th UK city to take on the project, launching at the community-owned live music venue, Exchange. As the only grassroots venue in the south of England with a Silver Award on Attitude Is Everything’s Grassroots Charter – a service that improves deaf and disabled people’s access to live music – Exchange could not be a better place for the project to grow. With Bristol local and IDLES bassist, Adam ‘Dev’ Devonshire, also heavily involved as patron, we were eager to discover how the team were planning to help people in the city. This month, Exchange’s manager, Iwan Best, sat down with us to explain how they are trying to make Bristol’s supremely diverse arts and culture scene accessible to everyone, how they are combatting loneliness as we enter the third year of the pandemic, and how useful it can be having big-name talent tweet about a local fundraiser.

Gig Buddies Bristol
Bristol is home to an abundance of celebrated art galleries, internationally renowned theatres and buzzing music venues as well as victorious sports teams and award-winning comedy clubs. With such a rich calendar of events on offer, the Bristol project will connect people who not only have similar interests in music but also have a love for theatre, a passion for sport and an appreciation for art.

“Being in Bristol, there’s such a broad range of events, we wanted to open it up,” Iwan tells us. “We’ve had a few people that just want to go and watch a game with someone and it seemed quite counter to what the project is about to say no, so we’ve already got a few people paired up to go and watch the Bristol Bears and the football.”

“It’s a day’s training because it’s really important that the volunteers aren’t there to offer primary care – it’s a befriending project for vulnerable adults, they’re not there to offer medical help but nonetheless the training has a lot of information about safeguarding, emergency procedures, and how to look out for the tell-tale signs that there might be a problem,” he says.

Volunteers are matched to one Gig Buddy with whom they will attend events in and around Bristol. Volunteers are expected to commit to at least one event per month with their Gig Buddy, and to meet once a month for a coffee to plan their event. Once volunteers have applied, they will be set up on the DBS system before attending an interview. Successful applicants will then be invited to a training day where, as Iwan perfectly sums it up, they will learn how to be a good friend.

“There’s also a lot about managing expectations because we find that people are keen to go out every week once they’ve got someone to go with. It should be fun – the whole point is that you’re going to the events that you would go to anyway and you make a new friend. The training also helps people to understand what it might be like to be neurodivergent or autistic, and thinking: alright this person might love metal but they might not love AC/DC or Guns N’ Roses because they haven’t had a social circle that has given them the opportunity to find out more. What could be a good thing to do is make a Spotify playlist with all the metal bands that are coming through Bristol in the next few months so they can find some new things.”

Exchange’s former bar manager turned patron, Dev, has been fundamental to the launch of the Bristol project. In June 2021, while Covid restrictions were keeping venue doors firmly fixed, he organised an online gig, inviting a whole host of musicians and comedians to the empty stages of Exchange. On the bill was Mclusky, Willie J Healey, Fenne Lily, TV Priest, Dogeyed and Wilderman as well as comedians Stewart Lee, Seann Walsh and Josh Weller. Alongside the evening’s entertainment was a raffle, which saw an outrageous list of prizes up for grabs. Rare pieces of signed merchandise from Frank Turner, Laura Marling, Florence Welch, The Staves, Fontaines DC and The National, to name just a few, were being given out at a fraction of the cost.

News of the event made its way around the social media universe in no time at all and was even picked up by rock band Radiohead, who directly tweeted it out to millions of their followers, creating quite the buzz. “Dev’s been critical to the whole thing – I don’t think Radiohead would have got involved if I’d have asked,” jokes Iwan. “Stay Up Late has actually had people get in touch from places like Philadelphia and Los Angeles because our fundraiser got so much press.”

Dev – a loyal support of the project since its early days in Sussex – said: “After witnessing first-hand what vital and wonderful work Gig Buddies do, it has been an honour and a privilege for me to be working with them and to help raise awareness of the wonderful service that they provide. Music and live events provide us all with so much happiness and catharsis, everyone deserves to have that joy in their lives.”

Bristol Gig Buddies Brian Wilcox, a carpenter, and Callum McLellan, who has Down’s Syndrome, have already been enjoying the fruits of Exchange’s labour. Their first outing was to see British Lion at The Fleece, featuring the guitarist from Callum’s favourite band, Iron Maiden. Brian told BBC Bristol: “I was looking for something to do to give a little bit back. It appealed to me; I like music and I wanted to help people. It’s been really nice meeting Callum and I can see the enjoyment he’s getting from it already.”

Championing accessibility
By no means does Exchange’s trailblazing start and stop with Gig Buddies. The team made accessibility their standard, not their goal many years ago. Exchange’s website clearly states: “We should all be fighting the idea that access to events is a privilege that should only be afforded to some. We want to make events in Bristol more than accessible, we want to make them welcoming.” Along with Gig Buddies, Exchange has recently launched a Go Gentle series of relaxed shows, which feature both touring bands and local performers. The gigs – which are designed for people who will benefit from a more relaxed environment including people with autism, sensory or communication disorders, a learning disability, those with age-related impairments and parents/carers with babies or young children – will be cosy with reduced capacity to make them inclusive to everyone.

“We’ve been working really hard on this,” says Iwan. “We’re trying to do things in interesting ways. Something that we want to do next is have audio versions of gig listings, asking different musicians to do it every month. Dev is going to do the first one then we’ll get some more Bristolian musicians involved.”

With several buddies already paired up, the team are constantly on the look-out for music fans, theatre lovers and sports fanatics to get involved in the project. The team are hoping to match at least 30 buddies within its first year and, all being well, they hope to one day hire neurodiverse and autistic people to help run the scheme. Ultimately, this space, without any shadow of a doubt, is one brimming with the potential to change lives, and it’s a pleasure to see.