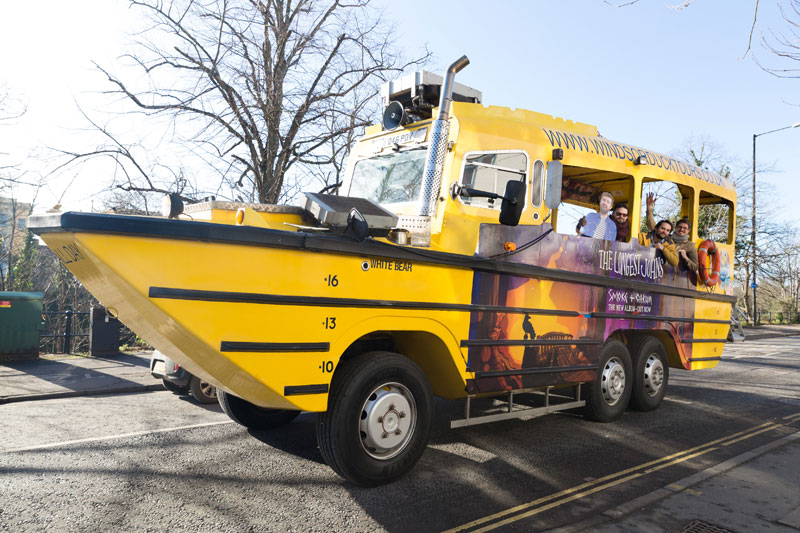 On Sunday 30 January, shanty stars The Longest Johns launched their album in true nautical style as they arrived in their hometown of Bristol in an obscure ‘Duck Boat’ (pictured) which, like their music, is fit for both land and sea.

After testing positive for COVID-19, Robbie, the fourth member of The Longest Johns, joins in the form of his perfectly proportioned cardboard cut-out. What started off as a joke suggestion became reality when the band, who last year hit the headlines with their Wellerman global viral success, shipped their energetic harmonies and vibrant oilskins from river to Rough Trade as part of their Record Stores Tour across the UK for album release week.

“We absolutely love the thrill of arriving at our hometown show in, quite literally, the most Longest Johns vehicle we could find. Erupting out of the River Avon to celebrate our album launch feels as surreal as when we first went viral! It is special to bring it back home, to where it all began!”, said The Longest Johns.

Singing en route, to the delight of their countless fans, the band braved the cold as they made their way across the water, then straight through town to their destination. Bringing new album Smoke & Oakum to life on the streets of Bristol, the four famous friends serenaded passers-by with heartfelt tracks such as single Hard Times Come Again No More and The Workers Song, which is dedicated to integral workers throughout the country.

Utilising their legions of online fans, the band invited key workers to join the guest list of their live appearances across the country. The pioneers of the TikTok phenomenon and chart hit, Wellerman, have accumulated over 310 million streams across their catalogue(and counting)and marked their version of Wellerman as the top track in over 187,000 shanty specific user-generated playlists.

Their abundance of sold-out shows saw a need for extended tour dates in the UK and overseas, as they prepare to hit the US in February this year.They will certainly need more than the Duck Boat to get them there.

The Longest Johns’ new album Smoke & Oakum is out via On Decca Records. Click here to listen.