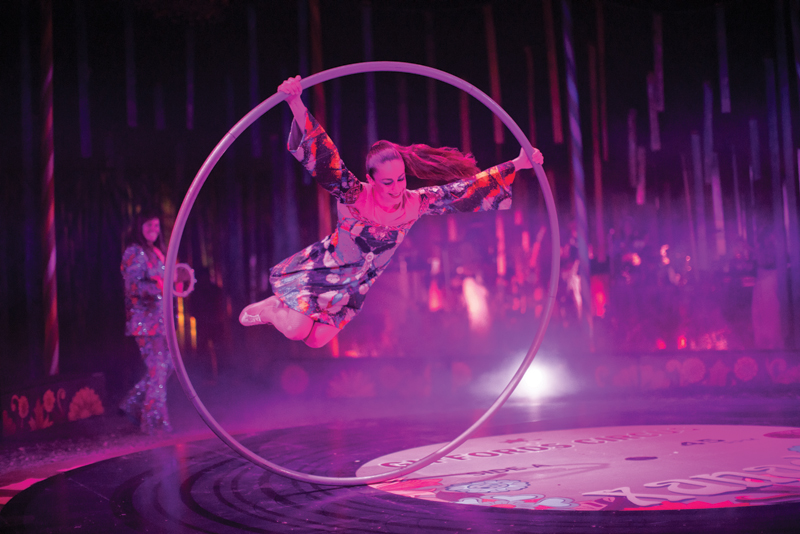 Super human: Giffords Circus back on the road

Who hasn’t dreamt of running away to the circus? The big top, the acrobats, high-wire acts and colourful caravans conjure up a nomadic life away from the rat race. For the spectator, it’s a reminder of a traditional art form, providing everything from laughter to wide-eyed amazement. Simon Horsford speaks to Lil Rice, one of the stars and now also producer of Giffords Circus, now back on the road for a new season after the pandemic-enforced break

Lil Rice was drawn to the big top via her aunt Nell Gifford, the founder and inspiration behind the circus, who died of cancer aged just 46 in December 2019.

I caught up with Rice at the home of Giffords at Fennells Farm, near Stroud, Gloucestershire, as she was preparing for their latest show, The Hooley (originally scheduled for last year), and I asked about Nell’s influence on her. “She was the most amazing woman I have ever known,” says Rice, “the closest to a genius I have come into contact with, and she was part of my life, the generation between my mum (pottery designer Emma Bridgewater) and me, as she is my mum’s half-sister. When she went off to join the circus, my sister Kitty and I thought she was the coolest person ever.”

It was while Rice was at the University of Glasgow studying philosophy and theology that she first thought the circus might be the life for her. “I did run away to the circus. I was at Glasgow and just hated it. I wanted somewhere where I didn’t know anyone and tried to reinvent myself.

“I hung out with a lot of tough people and then I thought, what am I doing? I did some waitressing and other stuff and after a while I wrote to Nell and just said ‘please can I run away; I will do anything’. It is really full on, which is what I was looking for – a life where you don’t have a minute to be bored.”

Until then, although Rice had been to Giffords since she was a child, the circus wasn’t on the agenda. In her teenage years, Rice (now 31) wanted to be a rock star, citing Janis Joplin as an inspiration. “I have always sung and performed. I was that precocious child who sang with my dad (illustrator and writer Matthew Rice) at the piano. I couldn’t work out why I felt so uncomfortable in my skin and think that although the music was brilliant, it wasn’t giving me enough. I like to finish the day so tired that I can’t lift my arms up. I was that child who people thought might have ADD and now they think, ‘She just needed an incredibly energetic outlet.’”

With Nell’s influence and the support of Pat Bradford, a Belgian hand balancer at the circus who tap dances on his hands, Rice went to the National Centre for Circus Arts in London. “We did everything in the first term from juggling and floor acrobatics to aerial work, dance, theatre and clowning.”

While there Rice performed in the Cultural Olympiad during the 2012 Games doing an aerial show on the London Eye, bungee jumping off the Millennium Bridge and free diving in Trafalgar Square. “The scariest day of my life was when we climbed the London Eye at three in the morning to rehearse.”

Does Rice, who exudes natural confidence, still get nervous? “Yes, I get quite bad fear. It’s part of the madness – terrified before I go on stage and then I love it when I am on. But if I lost those nerves, I would worry because that’s part of the energy. You need that frenetic quality. You also have to look like a human coming on stage and then do something superhuman.”

Rice’s goal when she began her circus career was a singing aerial act, which then progressed into singing while performing in a cyr wheel, a large metal ring in which the performer rolls and spins gyroscopically. It seems ludicrously difficult – more so as Rice chooses to sing as well. For five years she performed with Alula Cyr, an all-female cyr troupe, and as a singer she is still one half of Lil & Ollie with guitarist Ollie Clark. Rice performed with a cyr wheel at 2019’s engagingly beautiful Giffords’ show Xanadu, set in the psychedelic 1970s.

There is a buzz of activity around Giffords, from traditional sign writers working on the caravans to a dressmaker embellishing costumes, while Rice herself was about to do a series of stretching routines and work on a vaulting horse ahead of her session with a Percheron as this year she is performing on horseback. Giffords has a permanent team of around 10, increasing to between 60–80 during the season and the atmosphere, even now, is infectious and busy.

Life in the circus appears markedly different from going on tour with a theatre production. “At the beginning of the season you think ‘I’m never going to remember everyone’s name’ and by the end you can recognise somebody in the dark by their footsteps. It’s unbelievable,” says Rice. “And as a community, we don’t just do a show – we arrive somewhere and build a village. There is a lot of physical labour: people who set up the water, the electrics and then we put up the tent and we all eat together.”

The community feeling is hugely apparent. “If you are on stage, you are often putting your life in somebody’s hands. If you are doing a horse act, you have to know all the people around you are keeping you safe – those on the ramps, the ring boys, the people doing the rigging. You trust them. And you spend every waking minute with them!”

The blend of nationalities is an important feature. “Part of the attraction is you can hear six or seven different languages being spoken and they bring their own cultures. So round the back of one caravan, someone is making goulash and behind another someone is cooking a Cuban stew. The multicultural thing is amazing and makes it circus.”

That community spirit came to the fore during last year’s various lockdowns and the postponement of The Hooley. “Initially during lockdown many of the artists were stranded at Giffords unable to get a flight home so they isolated together, using up all the food in the freezers meant for the tour and continuing their training as they had no idea how long the lockdown would last. We managed to get the Cuban troupe home, but an Italian and Russian family locked down with us here at Fennells Farm.

“When it was announced [in summer last year] that restaurants could open again, we created a socially distanced dinner show called The Feast with Tweedy the clown and the acts that were at the farm.”

Giffords’ shows always have a carefully crafted theme. “What makes us different is the artistry in Nell’s ‘quintessential village green’ ethos,” says Rice. “Lots of circuses aren’t worried about there being a beautiful through line, but we create a storyline that carries through.” It may be why Giffords has been described as the “Glyndebourne of circuses”.

As for The Hooley, which marks the 21st anniversary of the circus, Rice says it’s a “Celtic party, a good old knees-up and there will be faeries and maybe trolls.” She will be doing two horse acts this year, after only starting to rehearse in earnest two years ago. The circus will operate at 50 per cent capacity until official advice changes.

The Hooley was devised by Nell Gifford and show director Cal McCrystal, a ‘comedy genius’, whose credits include working on the hit West End show One Man, Two Guvnors and Paddington 2. “Everything he does is exciting and uplifting,” says Rice. “The Hooley was conceived by Nell and Cal, I am just stepping in as producer.” Will there be a tribute to her in the show? “Yes something joyful.” As to future years, Rice says they will draw on Gifford’s ideas, after all, Nell’s philosophy was always “the show must go on.”

The heyday of the circus may have passed but thanks to the likes of Cirque de Soleil and Giffords and the rise of physical theatre, this sometimes forgotten art is back, says Rice. What’s more she is passionate about encouraging this upswing. “A couple of years ago, I did an outreach thing with the School of Larks (a Gloucestershire based school of circus arts). I worked with them for six weeks, realising how such a physical environment can be the making of some people.”

Rice points out that, “The circus was one of the first professions where a female performer was paid as much as a man. They had status; one of Napoleon’s mistresses was an acrobat. The women are doing the same job as the men. There are still strong men and sexy women – but backstage it’s unbelievable what the women do.”

Rice’s goal is to help take Giffords forward another 20 years and to keep the family feel. “I love it; it’s a challenging life. Whenever I thought I couldn’t do something, Nell would tell me to get on with it, and that means I’m doing something I never had the self-confidence to do. She pushed me.” Does she have any advice for wannabe circus stars? “Learn an instrument, learn a language and do some form of dance training because you can be useful in so many ways.”

Nell Gifford is buried just across the valley in Slad in the same church as the celebrated author Laurie Lee, who once said of his work that he “wanted to communicate what I had seen, so others could see it”. In her own way, Gifford has done that too – conjuring up a vision of what a circus should be like and spreading that magic around.