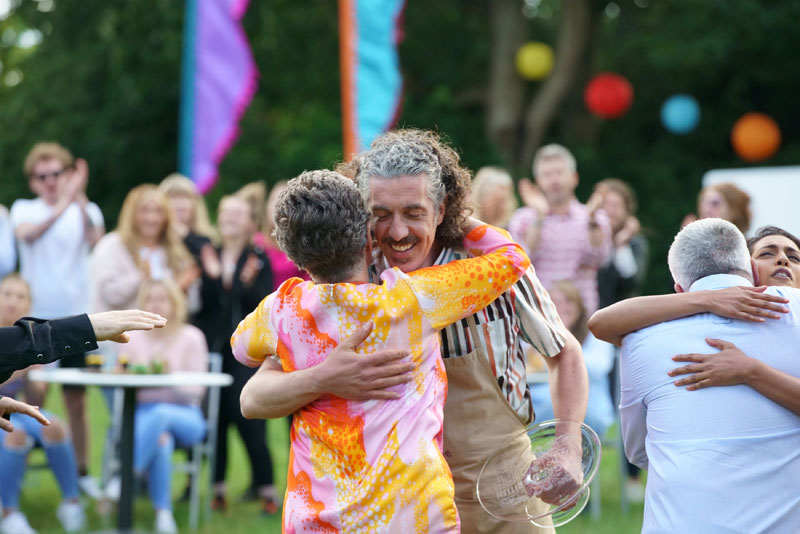 The Year of Giuseppe: The Great British Bake Off winner talks cake, ice-cream – and the best pizza in Bristol

As The Great British Bake Off crowns its 2021 winner, Bristol and Italy celebrate their first ever champion. Millie Bruce-Watt catches up with the man himself, Giuseppe Dell’Anno.

After 10 episodes, 30 challenges, and a heap of Hollywood Handshakes, The Great British Bake Off crowned the winner of its twelfth series last week (23 November). Much to the delight of us Bristolians, it was our very own Giuseppe Dell’Anno that walked away with the famous cake stand trophy. The first Italian baker – and the first person from Bristol – to ever win the competition, Giuseppe was stunned to hear his name called in the final moments of the show, frozen in disbelief as runners-up Crystelle Pereira and Chigs Parmar celebrated his win. “There are no words, I am speechless for once,” he said moments after accepting the award. “All I can think of is the reaction from my mum and dad. The fact is that everything I have done to deserve this comes from his heritage – it’s the best thank you note I can possibly send him. He is going through a very bad time health-wise, so I think this is going to be a great boost.”

Upon hearing the news of Giuseppe’s win, we couldn’t wait to catch up with him to chat all-things Bristol. Proud to be a local resident, Giuseppe told us all about his incredible Bake Off journey, his love for his heritage, his favourite local restaurants and, most importantly, what he’s planning to cook this Christmas.

Since the filming of the series took place between May and July 2021, the 45-year-old engineer was able to watch the final episode with his friends and family on a big screen at Gloucester Old Spot pub on Gloucester Road.

“There were people from the production team with me at the Gloucester Old Spot,” he told us. “Most of them had been in the bubble with me during the filming of the show and have become new friends. There is no doubt that, without their much needed confidence injections, I would have had a much harder time ploughing through my occasional crisis. So having them there, alongside my family, made what would have been an intense moment even more special.

“I have had so much support from Bristol and Italy. I have had lots of local people getting in touch and thanking me for putting Bristol on the map but, equally, Italians all over the UK, saying it’s great to be representing our culture in such a high profile show. It has been really heart warming.”

When asked about where we could find Bristol’s best pizza and ice cream, Giuseppe had no problem directing us to his top spot. “In those rare occasions when we manage to go out as a family, I find that the environment, the flavour and the quality of Franco Manca are as close as you can get to a traditional Italian pizzeria. The kids love ice cream and Swoon is certainly our favourite spot when it comes to gelato, and also conveniently close to the pizza place! The entirety of the catering industry in the last 18 months has suffered tremendously, so my thoughts are with the whole category and those that are struggling to keep their businesses afloat.”

This year, the bakers made everything from malt loaf and pavlovas to fabulous focaccias and baklava. In the final episode, judges Paul Hollywood and Prue Leith set three challenges that would test every aspect of the finalists’ prowess. In classic Bake Off style, Giuseppe, Crystelle and Chigs had to make the perfect carrot cake, produce Belgian buns and design a showstopping Mad Hatter’s Tea Party, demonstrating four different baking disciplines. Giuseppe made a tear-and-share bread filled with chocolate and hazelnut and styled in the form of a giant mushroom; mango and passionfruit ‘drink me’ panna cottas; orange and fig heart-shaped muffins; and asparagus and pea-filled choux pastries shaped like a caterpillar. After a disastrous moment with the oven, Giuseppe received rave reviews from the judges.

“Prue and Paul said that [my showstopper] was delicious and had stunning flavours. Prue took one of the panna cottas for her lunch, so that was a big moment for me! When Prue steals one of your desserts it doesn’t get better than that.”

Throughout the challenges, Giuseppe impressed the judges and viewers alike with his meticulous precision, receiving two Hollywood Handshakes and two Star Baker awards. “My best moment in the tent was the first handshake I got from Paul for my focaccia,” he explained. “It meant a lot to me: the flavours in that bake brought back lots of very personal memories. It was without a doubt the most intense and powerful moment in the tent.”

After the trophy was firmly in Giuseppe’s hands, Paul revealed that the Italian baker had been a “choux-in” from the outset. “The first time I walked into the tent during the first signature I saw his mini rolls, I thought that looks like our winner, you could see the heart and soul going into his baking. He has done an incredible job,” he said.

There is a quirky vibe in this city that makes it very special: I particularly like the combination of strong Bristolian pride with welcoming international openness that makes it, to my eyes, a unique place to live

Like last year, the series was filmed in the grounds of Down Hall in Essex, where the bakers, judges, presenters and crew members formed a Covid-secure bubble and lived together for the duration of filming. The experience undoubtedly allowed the bakers to develop genuine relationships. “Whoever did the casting did a fabulous job,” said Giuseppe. “I have never felt so close to such a diverse group of people in such a short time! My fellow bakers were truly a bunch of exceptionally nice, well-tempered, kind, generous and friendly people, all with a phenomenal sense of humour too.”

But how did Giuseppe keep it a secret for so long, we hear you ask? “My neighbours must have thought that I had moved out… I told my colleagues that I had leftover leave to take and that I was going to be away from the office. The working from home arrangement has made the whole disappearance much easier to hide… It was much more difficult to find an excuse to tell my kids. I could not possibly tell a four, six and eight-year-old that I was going to be a baker on Bake Off, or the whole village would have found out in no time. So I told them that I was away ‘working’ in London.”

According to both Paul and Prue, this year’s final was the hardest they have had to judge but it was to be Giuseppe’s year. “I feel like it’s been a great year for Italy,” said Giuseppe about his home nation, which also won the Eurovision song contest, Euro 2020 and the 100m final at the Tokyo Olympics this year. “Dell’Anno is my surname which translates in English to ‘of the year’ – and I feel this has certainly been my year.”

As for the biggest lesson he learned along the way: “I have learnt to take myself less seriously,” he admitted. “My job and my background have trained me to always be exact, accurate and… serious. Very much what you’d expect from an engineer, after all. In the tent, I have enjoyed liberating the more creative side of me and I have learned to embrace what I am.”

Over the festive season, you’ll mainly catch Giuseppe spending time with his family, enjoying their favourite Yule time activities. “Christmas in our household is all about simple traditions and family time. Ice skating is a long standing family favourite but, more recently, a visit to the Westonbirt Arboretum has become a new Christmas must-have.”

With Christmas now only weeks away, we couldn’t help but ask what he was planning to cook. “Traditionally, we have a seafood-based dinner on Christmas eve and then the traditional home-made lasagna with a roast on Christmas day. This year, picking the dessert will be much more difficult as I have the feeling that a shop-bought panettone just won’t cut it.”

As for his thoughts on Bristol itself, Giuseppe knows it to be a special place to live. “There is a quirky vibe in this city that makes it very special: I particularly like the combination of strong Bristolian pride with welcoming international openness that makes it, to my eyes, a unique place to live.”

During the final episode of Bake Off, viewers learned that Giuseppe’s baking inspiration has always been his father. “He used to be a professional chef and a passionate baker,” he recalled. “I started baking when I first became a dad and the main reason was that I wanted to give my kids the same pleasure and memories I had in my childhood through the sweets my dad used to make for us.”

Now, as Giuseppe joins the exclusive winners’ club, he looks forward to the opportunities that may come his way but, ultimately, he hopes he can do one thing for his family. “I would love to crystallise my dad and family’s heritage in a cookery book of Italian baking – one that would draw from my family and their love for baking. It runs through our blood. It would be good to know that there would be a cook book out there for posterity for the Dell’Anno family.”

We’re sure we speak for Bristol when we say: we can’t wait to read it. It’s been a pleasure, Giuseppe – we will miss you on our screens and we wish you all the best!

If you’re already missing Bake Off and want to recreate some of the bakers’ finest moments, enjoy some of their recipes here: thegreatbritishbakeoff.co.uk. You can also catch up on series 12 of Great British Bake Off at channel4.com

All images courtesy of Channel 4.