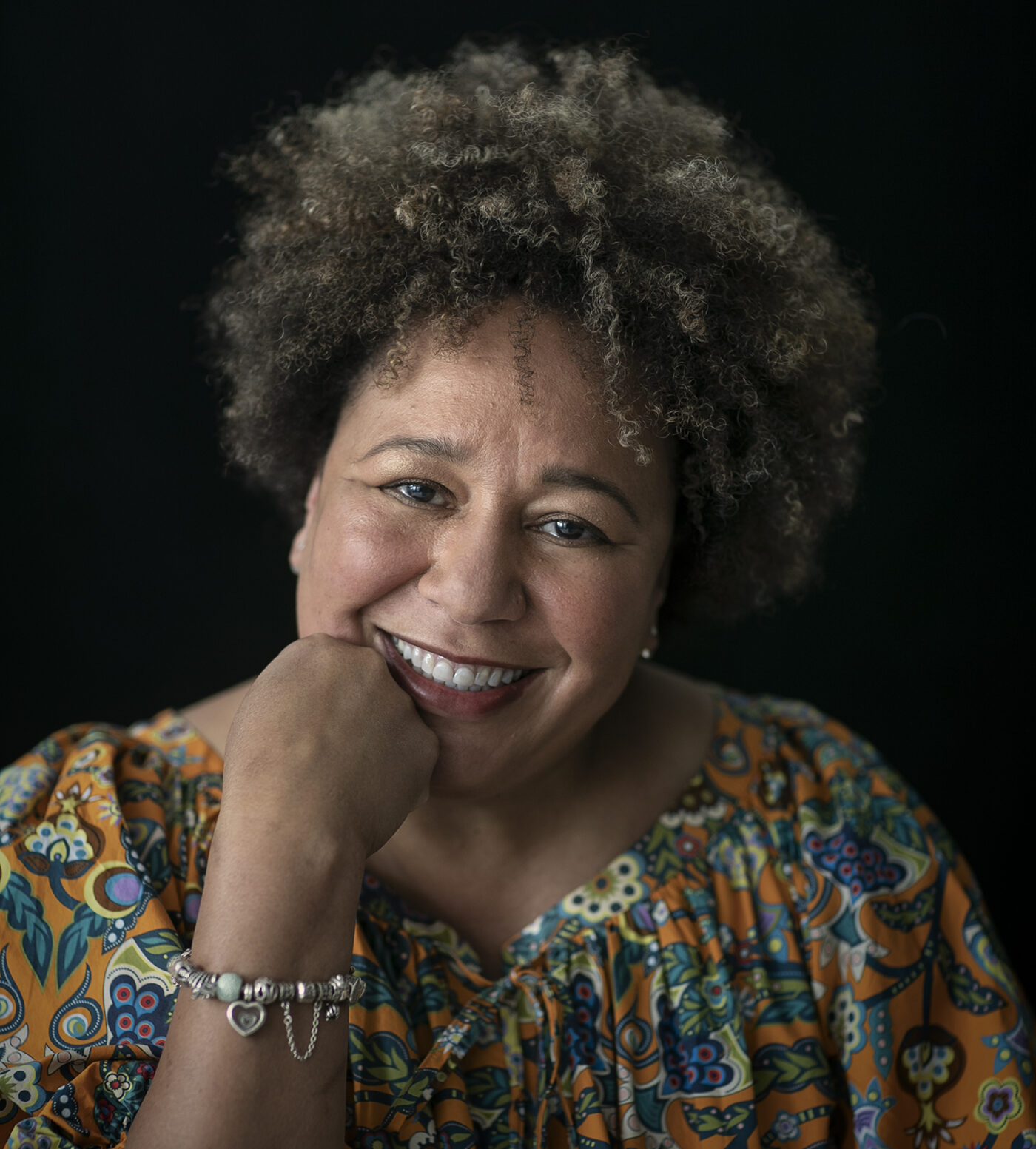 Piercing and powerful: an interview with novelist Nikki May

As Bristol’s very own Nikki May prepares to publish her debut novel this month – already set to become one of the most talked about books of 2022 – we catch up with the author herself and delve into her incisive portrait of modern women and friendship. Think Sex and the City with a killer edge…

Most notably, the soon-to-be-published novel has sparked the interest of BIFA-winning and BAFTA-nominated writer Theresa Ikoko, who last year announced that she was adapting the story into a major BBC drama. Theresa co-wrote the 2019 British coming-of-age film, Rocks, which follows the life of a Black British teenager as she struggles to care for herself and her younger brother after being abandoned by their single mother. The film premiered at the Toronto International Film Festival and earned seven nominations at the 74th British Academy Film Awards, tying with Nomadland. Since the BBC broke the news of Theresa’s involvement, the likes of Grazia, Stylist and The Independent have since dubbed Nikki’s novel as ‘one to watch’.

Described as a contemporary friendship novel with a crime twist, harbouring a darkly comic and bitingly subversive take on love, race and family, Wahala follows three 30-something Anglo-Nigerian friends living in London. Ronke is desperate to settle down; Boo has a husband and daughter, but feels frustrated and unfulfilled, caught in a whirl of school runs and daydreams; and Simi has a successful career in fashion, though is crippled by imposter syndrome – her husband also thinks they’re trying for a baby, but they’re not. When the charismatic Isobel – a lethally glamorous friend from their past – comes into their lives, tensions begin to mount. As cracks in their friendship form, it is soon obvious Isobel is not there to help. When she is driven to a terrible act, the women are forced to reckon with a crime in their past that may have just repeated itself.

Nikki, who was born in Bristol but grew up in Lagos, dropped out of medical school at the age of 20. She moved to London to begin a career in advertising and went on to run a successful agency before turning to writing. This month, we caught up with the author, still feeling “very proud to be connected with Bristol”, to chat all about her recent triumphs and, of course, the ‘trouble’ that is soon to be released on the world.

I wanted to read a book that had people like me in it – mixed-race and middle class. Lives that include jollof rice in the same breath as focaccia recipes

Desperate to know where the inspiration for the novel came from, Nikki tells us how her piercing portrait of modern women and friendship was born. “The inspiration for Wahala came from a long (and very loud) lunch with friends at a Nigerian restaurant in London. As I boarded the slow train home to Crewkerne, I code-switched out of Nigerian me, into English me and started thinking about my two cultures. I’d written the first scene before I got to my stop.

“Wahala is one of those wonderful words that’s used all over West Africa, usually said with a groan, a sigh or a head shake, and it means trouble. Isobel is the ‘wahala’ of the title, her motives for causing ‘trouble’ propel the narrative, all the way to the killer twist at the end.”

Although Nikki’s productive train journey produced the first scene – rather reminiscently of J.K Rowling’s starting point for Harry Potter – it took her another 18 months to finish the novel. With a brain brimming with potential story lines, I wondered how Nikki organised her thoughts during her writing process.

“I started the day with a long dog walk and used the time to think about what I was writing that day, often stopping to send myself voice notes. I tried to write for three hours a day but I’m great at procrastinating and finding other things to do. Even cleaning the loo seems appealing when you have a difficult scene to wrestle with! I wrote the first draft of Wahala in six months but then left it in a drawer for another six months, scared to read it, convinced it was rubbish. When I finally plucked up the courage to go back in, it took another six months and two big edits before I was confident enough to query agents.”

After almost two years since the first spark of inspiration, Nikki said it was “wonderful and surreal” to see her novel in a nine-way auction and hear the news that it would be adapted into a major BBC drama. “Liz Kilgarriff who is producing the series is a legend. She did Bodyguard, The Cry and Luther and she really gets the book, so I know I’m in safe hands,” she says. “Theresa Ikoko is writing the screen play. In my wildest dreams, I never imagined my name in the credits on a BBC drama, so this is dream come true stuff. I can’t wait to see who they cast as my girls.”

Billed as Sex and the City with a killer edge, the novel delves into the lives of three incredibly relatable characters. Woven throughout every chapter are issues concerning race, class, identity and womanhood, but above all, the novel is injected with a hefty dose of drama.

“Being a woman is a complicated thing,” says Nikki. “The world we live in pulls, pushes and tugs at us, with expectations of our bodies, hair, careers, relationship status and even our reproductive organs. My story is refracted through a biracial lens, which makes being a woman even more complicated. I wanted my characters to be flawed women, trying their best but making mistakes, just like we all do. I wanted to read a book that had people like me in it – mixed-race and middle class. Lives that include jollof rice in the same breath as focaccia recipes.

“So much black literature is centred on struggle but that’s not everyone’s experience. It’s impossible to have four mixed-race characters and not touch on race, colourism, or class but I didn’t want to bang people on the head with it – I wanted to entertain, I wanted Wahala to be fun.”

From the outset, it is clear that the novel is a joyful celebration of Nigerian and British culture and Nikki skilfully explores the immense complexity of one’s sense of identity. “By getting to know Ronke, Boo and Simi, I hope readers will see that being mixed-race can be rather complicated,” she explains. “I’m used to people telling me what they think I am. I’m either ‘not black enough’ or ‘not white enough’ unless of course, I’m being ‘too black’ or ‘too white’.

“The concept of identity and belonging is so interesting, I hope people will see that being mixed-race is a mixed bag. Like my characters, sometimes my sense of belonging is concrete, other times its elusive. But all in all, I got the long straw, two homes is twice the joy.”

Although now living in Dorset with her husband and two standard schnauzers, Nikki still very much feels connected to her birth place with Bristol University making a stellar appearance in the novel as the original meeting ground for the main characters. Interested to hear her thoughts about our beloved Bristol, Nikki tells us:

“It’s where my parents met – my dad was studying medicine and my mum was in art college – and it’s where I was born. My father still talks fondly of his days in Bristol, and I’ve always felt an affinity with the city. My favourite photographer, Mike Cooper, is a Bristolian (he did my author photo – pictured!), I do my Christmas shopping at Cribbs Causeway, and I love the ethnic food shops on Stapleton Road. Al Noor is where I stock up on yam, plantain and scotch bonnets. Bristol has wonderful restaurants too – we had a lovely supper at Nutmeg in Clifton a few weeks ago. I love Bristol, it’s a fabulous city and I’m very proud to be connected to it.”

Much to our delight, Nikki is currently working on her second book, which already sounds just as powerful as Wahala. “I’ve got a very rough draft that I’m trying to knock into shape,” she says. “It’s called Brown Girl in the Ring and it’s loosely inspired by Jane Austen’s Mansfield Park. It’s set in the late 1970s to late 1990s and explores the thorny territories of race, class and prejudice. But I’m a big fan of epic revenge stories and shocking twists so watch this space!”

As it’s looking like the West Country may be making an appearance in not just one but two of Nikki’s novels, we may well be seeing another production company roll up its film trailers in the not too distant future – watch this space indeed.

Wahala will be published on 6 January; pre order your copy at: penguin.co.uk; £14.99