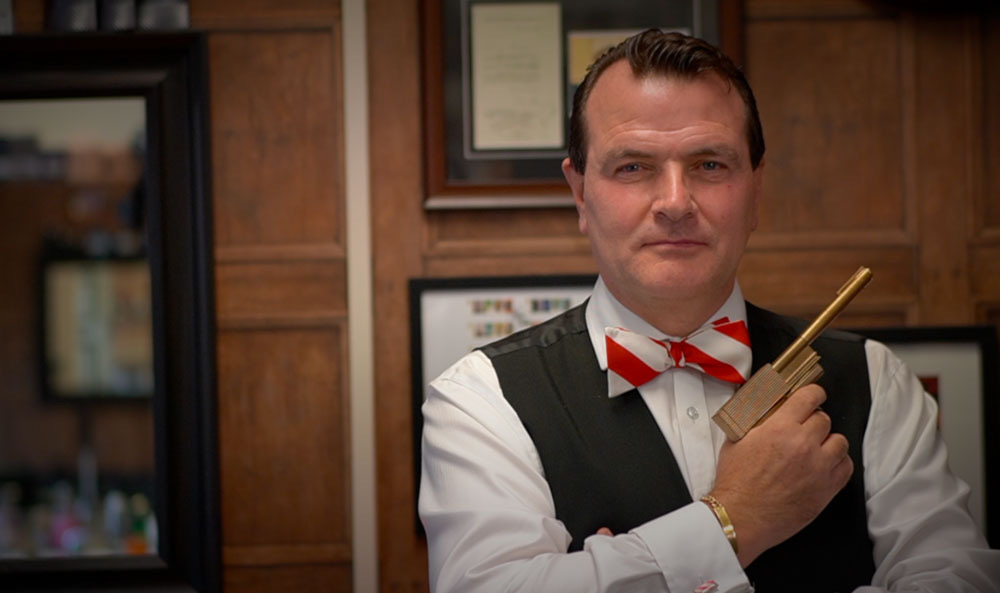 Bond is back: Bristol’s superfan on the cars, the glamour, the action

Ahead of the hotly anticipated 007 film, No Time To Die, we spoke to Bristol’s very own James Bond superfan, David Antonio Smith, who runs a popular gentleman’s barbers in Westbury-on-Trym.

David’s themed barbershop, Barber-on-Trym, is brimming with great 007 memorabilia. As we sit down with him, he talks about his favourite moments, his impressive collection, how he thinks the final episode of Daniel Craig’s tenure will play out, and so much more.

With special thanks to Dominik Karbownik – Daniel Craig lookalike in our opening sequence. See him on Instagram at: danielcraigdouble07

The feature below is from our November 2020 issue:

We were poised and ready for No Time To Die to hit the big screens this month, but following the announcement it would be postponed to April 2021, Millie Bruce-Watt caught up with Bristol’s biggest James Bond fan, David Antonio Smith, to calm our restless minds

There’s been a lot of anticipation surrounding the latest James Bond film and fans have been champing at the bit to see Daniel Craig play his final stint as 007 since the title was first announced in August 2019. No Time To Die was one of the first major films to postpone its release from 3 April to 12 November before the global health crisis caused by the coronavirus was even called a pandemic. In a statement released by the filmmakers last month, the film has been pushed back again to 2 April 2021 “in order to be seen by a worldwide theatrical audience.”

Bond 25 has been shrouded in secrecy from the outset and, with new additions to the cast and writing team, all eyes have been drawn to the high-octane series. This time around, Cary Joji Fukunaga is directing, with Rami Malek, Léa Seydoux, Lashana Lynch and Ana De Armas appearing as new faces. Phoebe Waller-Bridge’s writing prowess will undoubtedly add a twist to the script and Billie Eilish’s vocals have already seen the biggest opening week of all time for a Bond theme song.

No Time To Die is set to be a showstopper, and in an attempt to calm our restless minds, we caught up with James Bond superfan, David Antonio Smith, who has been collecting the franchise’s memorabilia for 35 years. A fountain of knowledge on the subject, David let us delve into his impressive life-long collection and ask our burning questions.

The fascination with the spy franchise began when David was seven. “My older brother took me to the cinema and, in those days, there were double bills so it was Dr. No and From Russia With Love – the two Sean Connery movies – and I always remember the spider crawling up his arm. From then, I had my first Aston Martin for Christmas, the one with the ejector seats, and it slowly built up from there.”

As well as toy cars, David has since accumulated a varied assortment of collectables, from coins and stamps to a replica of the gun used by Christopher Lee in The Man With The Golden Gun.

“When I got my first job and I got my car, we went to the toy fairs in Shepton Mallet, Taunton, Exeter, Birmingham and London. I decided to start up a collection and one model lead to another and it went on and on. Before I knew it, my bedroom and my mum’s loft were full of it and then I got married and now our loft is full of it.”

A barber based in Westbury-on-Trym, David’s shop has been attracting customers from Bristol and beyond with his Bond-style interiors and outstanding Bond knowledge. Entering his shop and heading into M’s office – the waiting area – you are then guided through to the cutting chair and an area in the style of Q’s workspace. “When we came to open Barber-on-Trym, we wanted to create a theme and we decided to make a James Bond-themed barber shop because I was so in

to it. It’s actually helped because I get to enjoy my collection and share it with my customers. The young boys just getting into Bond especially love it – they love having their pictures taken along the backdrop of my collection.”

David has spent many hours researching, locating and buying the items he wanted over the years. “It’s been an interesting journey from 1972, from watching my first ever Bond movie to collecting. We didn’t have eBay or Amazon or SatNav so you would buy a monthly magazine, find something you wanted, ring the number and they’d give you an address. You get your road map out, you go to the middle of nowhere and someone has an old Aston Martin you want and you do the deal there and then. Those days were fun.”

The collection consists of posters, models, film memorabilia, videos and books but, for David, it has always been about more than the actual items. “Each piece now has become a treasured piece for me. When I look at a car, a gun or a book, my thoughts go back to the person who I purchased from; that’s why it means so much to me. The value isn’t the value of the item, the value is the people I’ve met.”

There are, however, some items in David’s collection that are more precious than others. “My most prized possession is the golden gun. It’s a cigarette case, a lighter, a pen and a cufflink together and I got it over 20 years ago. It was held for six months at East Midlands Airport because it came over from America as a weapon. It’s 24-carat gold plated. The airport security wanted to check it couldn’t be made in to a gun, which, of course, it can’t because it’s solid gold.”

A huge part of David’s fascination with the spy franchise is the man behind it all. Ian Fleming’s illustrious career as an author and journalist saw him write 11 Bond novels, two collections of short stories and the children’s classic Chitty-Chitty-Bang-Bang. In 1952, Fleming wroteCasino Royale, his first novel of the series which became the first film in which Daniel Craig played the secret agent in 2006. “Fleming wrote so many brilliant stories. It took nearly 60 years to make that film because of who owned the rights and who could produce what. There’s a long history with the Bond films and it’s fascinating. It’s not just about going into the cinema and watching a film, it’s so much more than that.”

With No Time to Die set to be the 25th film in the James Bond series produced by Eon Productions since 1962, excitement and expectation was high for the anniversary release, which will also be the final outing for its leading man. After five films that have raked in over £1 billion worldwide, Daniel Craig, the sixth actor to portray Bond, is passing on the baton. There’s been years of speculation as to who will be next to utter the character’s famous lines, with Tom Hardy, Idris Elba and Richard Madden among those rumoured to be taking Craig’s place.

According to David, however, it could have started out very differently. “In 1962, when they were casting for Dr. No, they wanted our very own Cary Grant. He said he would only do the one film and they knew they wanted to do a whole series so they didn’t cast him. It could’ve been a Bristolian to be the very first James Bond!” Whatever happens next, David is sure the franchise has many more storylines to explore. “We don’t know what the ending of No Time To Die is. Does he continue from there? Are they going to remake some of the old ones? There’s so much in the pipeline. One thing for sure is he will be British.”

Although audiences have to wait even longer to see the film in a cinema, David believes it will be worth the wait. “The world premiere has to be done properly,” he says. “They want to make sure the actors, the producers and the investors are all there. Without the fans outside as well, it won’t be the same.” In the meantime, fans of the franchise can comfort themselves with the back catalogue, even though as a fan since the age of seven, David finds it difficult to pinpoint which film is his standalone favourite. “As a fan you like the whole genre of Bond. If I had to choose, my favourite movie would be From Russia With Love, 1963. My favourite Bond would be Sean Connery but I think Daniel Craig has done a fantastic job. He’s brought it right back to life and given it the origins.”

David’s vast collection and Bond-inspired barber shop has attracted Bond fans for decades. In more recent years, Barber-on-Trym has been cutting the hair of the official Daniel Craig lookalike. “When he comes here for his haircut, people have to do a double take because they think it’s Daniel Craig. It’s brilliant!”

A collection of this size and popularity can also sadly attract the wrong kind of attention. “About a year ago I was robbed. I was going to my auntie’s funeral and I left the shutters up and a note on the window to let people know that I would be back in the afternoon. By the time I came back, someone had broken in and they’d stolen some of my items. I didn’t let it get to me – otherwise it eats you up inside. What’s been great is that customers have offered their own Bond collectables. People have been wonderful.”

It’s not just the customers who heard about the break-in and wanted to help. “I got something from Caroline Munro – she played Naomi in The Spy Who Loved Me,” David remembers. “She sent me a photograph. It says ‘Just for you, David. Best wishes, Carly Munro as Naomi, 007’. The actress, now in her 70s, heard about it and she sent me an 8×10 photograph, which I’ve got in my shop now – it’s heart touching. It relieves the pain of being broken into.”

Barber-on-Trym has been open for five years in Carlton Court and David shows no signs of slowing down, with his collection or his devotion to Bond. His most recent purchase is a Blackwell Fine Jamaican Rum, a 007 limited edition bottle created by Chris Blackwell – the record producer and current owner of Ian Fleming’s former residence, GoldenEye. “I thought I had to have that,” says David. “It’s been a wonderful 35-year journey for me, understanding James Bond and being part of his life. James Bond captured my heart and I just love it.”