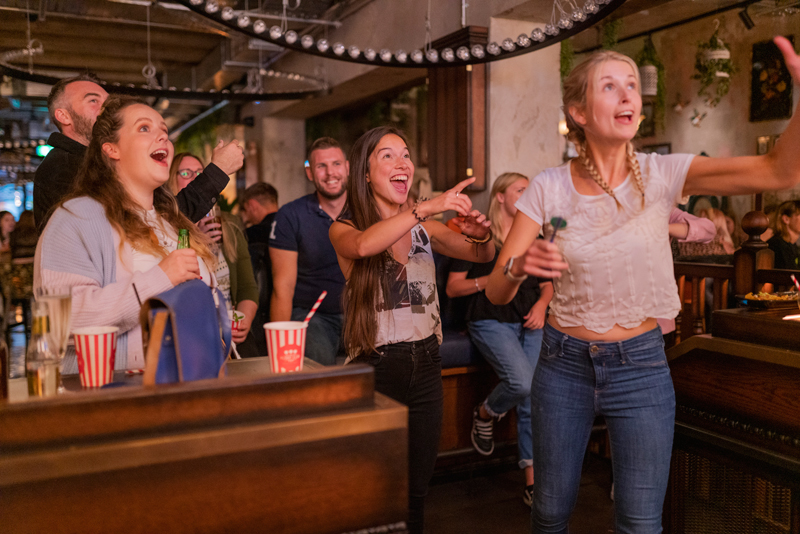 To the oche! Flight Club launches in Bristol

As a new darts venue swings open its doors in the Old City, Millie Bruce-Watt finds an antidote to post-lockdown blues

Corn Street – traditionally a honeypot for all things hospitality – is perpetually heaving at all hours thanks to its string of late-night hangouts that keep the party going. Offering everything from swanky cocktail bars to Vietnamese street food, Corn Street has been synonymous with a good night out. And now, with the arrival of one of London’s raved-about ‘social darts’ venues, Flight Club, another layer has been added to the Old City’s vibrant nightlife. With nothing of the sort quite like it in the centre, we were eager to discover more. After all, you can’t beat a bit of bully.

The launch saw the space unequivocally thrumming with optimism. Stepping through the doors was like stepping through the looking glass, straight into a Victorian fairground. Its deep mahogany backboards, colourful stained glass windows and merry-go-round-inspired lighting were combined with the nostalgic warmth of a British pub, somehow giving it the high-energy ambience of a Las Vegas nightclub. The music was enticing, the chatter lively and the party in no sight of ending.

Flight Club has supercharged the traditional game and created an immersive experience for both rookies and ace dartists to enjoy. Choose from multi-player game options including Snakes and Ladders and Quack Shot and watch as Flight Club’s patented dart tracking technology, designed by its very own astrophysicist, calculates your scores – no longer any need for our debatable maths skills!

After spending the first 10 minutes of our 90-minute slot taking the perfect picture for our player icons, our group of six had ample time to play a couple of games of Demolition. The aim: demolish your on-screen tower of 180 bricks in the fewest darts possible. First to hit exactly zero is crowned the winner. What we found most impressive, however, was the high-res cameras that were poised and ready to capture every fluke bullseye we managed. These action replays were then sent to our email address as ready-for-the-gram ‘stories’ 48 hours later – pretty neat.

At the touch of a button labelled ‘more food and drink’, a waiter was with us in seconds. With everything from Korean beef skewers and sharing platters to Margherita and ’nduja sausage pizza paddles on the menu, we tucked into some divine flavours. The vegans and veggies among us also eyed up vegetable gyozas with ponzu dipping sauce and barbecue-marinated aubergine tacos with mango salsa. After some refreshing prosecco and one of the smoothest espresso martinis in town, it was fair to say we were fans of Flight Club.

This vibrant spot has a guest capacity of 200. Its seven sizeable playing areas or ‘oches’, which were cocooned in chunky leather booths, meant there was plenty of space to enjoy the buzz. For parties looking to celebrate in style, Flight Club also offers private rooms and tall tables at the large feature bar.

It’s hard to visit this establishment and not be thoroughly impressed by the staff’s enthusiasm. Eager to accommodate, their energy is a major attraction point. Ultimately, we found Flight Club a refreshing antidote to a year in lockdown; catching up with friends over a drink and an evening of fun and games in the latest inner-city wonderland.