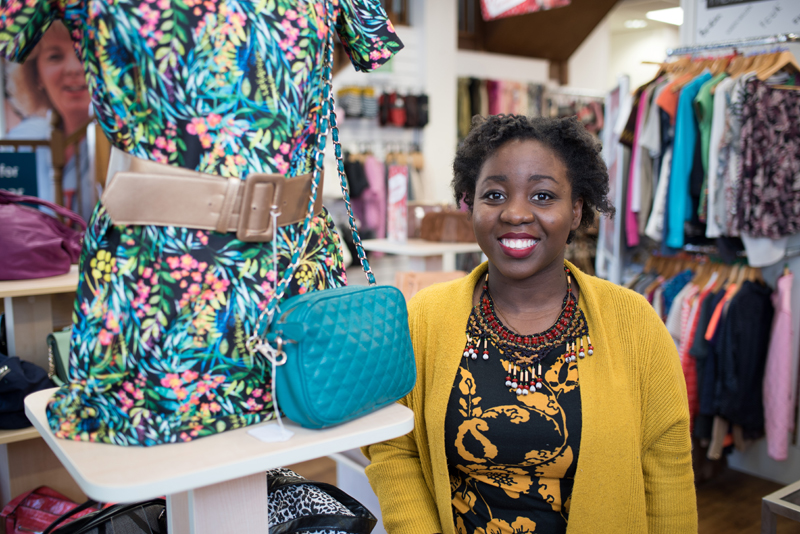 When it matters most: St Peter’s Hospice turns 40

The city’s only adult hospice is celebrating a milestone. We meet one of the first Bristolians to contribute their time at its flagship charity shop, and applaud the vital work of a wonderful organisation in real need of further funding and helpful folk

It’s been 40 years since St Peter’s Hospice opened a charity shop on Wells Road. Back in 1981, hospice care in itself was still a relatively new concept, developed by Dame Cicely Saunders 14 years earlier. The mother of palliative care in modern medicine, she established the first hospice – London’s St Christopher’s – in the late 1960s, prompting a working party to form and look at the feasibility of having a hospice in Bristol in 1969. The group included medical consultants, GPs, nurses, a surgeon and a solicitor, and when Dame Cicely came to Bristol to speak at a public meeting, enthusiasm increased. Fundraising began in 1977 and the first community nurse, Olive Martel, was appointed in 1978, with St Peter’s Lodge, as it was called, taking in its first patient – with beds for a further six – in 1980.

If your life hasn’t been touched by this very special Bristol charity since then, the odds are that it will, directly or indirectly, at some point. And, boy, will you be glad they are there if you need them. Caring for adults with life-limiting illnesses, St Peter’s aims to improve the quality of their living and dying while extending support to loved ones. With only 20% NHS funding, it’s very much an autonomous organisation. Care is provided free of charge but costs £22,000 a day to deliver – some of that comes from gifts in wills and fundraising, but a large chunk comes from their charity shops so, with the pandemic-related closures, income is significantly down.

Commercial director Jayne Clarke levelled with us. “The charity has seen all its shops close for several months and the majority of major fundraising events cancelled,” she said. “Sadly we have been forced to reduce the number of beds in the inpatient unit at Brentry from 15 to 10 and we still face a significant deficit of around £1.1million for the financial year 2021/22.”

The medical teams fought hard to maintain their high standards through distance restrictions, PPE and the extra worry among patients and families. “We know the unique level of care we provide sets us aside and the effects of Covid made that difficult. For a nurse, being unable to provide a hug or a hand to hold has been incredibly hard. Our teams rallied around to support with extra rounds of cleaning, work from home, homeschooling, rearranging events, providing therapy over Zoom. It has been challenging but we have shown agility in our ability to keep on being here for Bristol.”

As the charity considered the cash flow, they knew they needed to look to the community in which they are so much embedded for help to fill the hole in their finances, and this included one pretty high-profile St Peter’s fan. “We were so lucky that long-term supporter Stephen Merchant agreed to launch the When It Matters Most campaign,” continued Jayne. “He gave his time generously. We cared for Stephen’s grandmother and a family friend so the family understand the care we can provide and the difference it makes.”

The 40th anniversary has coincided with lockdown restrictions lifting so it’s an exciting time as the unique St Peter’s retail hubs reopen to Bristol bargain-hunters, and there’s plenty to browse – mobile donation stations received over 10,000 bags while everything was closed. With everything from vintage clobber to fabulous furniture ripe for the upcycling, the 47 local stores, including a coffee shop and a home store, provide a sustainable way to shop. Each is run by dedicated volunteers from all walks of life – students, Duke of Edinburgh youngsters, those who work part-time or are retired – who spend hours sorting donations, merchandising and delivering stock. Without them, the hospice wouldn’t be able to offer patients free care at tough times. “We have drivers, flower arrangers, gardeners, café workers, shop staff and counsellors as well as our Hospice Neighbours scheme,” said Jayne. “We get so much from all these roles and we know the volunteers get an awful lot from it too, to such an extent that some people have been doing it for 25 years.”

Make like Mildred and roll up those sleeves National Volunteers’ Week is about to get underway – the perfect time, if one was needed, to lend a hand. Ninety-year-old great grandmother Mildred Ford was one of the very first volunteers at the original shop in Knowle – set up by hospice supporter, businessman and “absolute hoot” John Miles whose family had a big haberdashery in Bedminster. When Mildred began contributing her time on the Thursdays she had off from her job as a teaching assistant at Victoria Park Infant School, little did she think it would be an association that would last decades. But she rolled up her sleeves and soon became a familiar face.

“I went along the day they opened,” she remembers. “I did a bit of everything, from sorting clothes to working behind the counter. We had no tills, just a cash box; we had to write down every sale and hopefully it would add up at the end of the day! Often we’d have more in the box than in the book but that was the better way round.”

At that time, the idea of a charity shop was quite new. “There were second-hand shops but they were often seen as dumping grounds, and our shop was very upmarket. People were generous with what they gave; there weren’t many things you’d pick up with a finger and a thumb and fling straight in a bag!” One day a gold bar set with an amethyst even came in with a box of jewellery. “Two fellows who lived off the Wells Road, who I’d met at antiques fairs, valued it at 150 quid and we got about 100 for it which wasn’t bad going,” says Mildred. “Another lady came in with five beautiful cut-glass decanters. I sold the lot at school for £10 or £15 each – that was more than a day’s cash in the box. All the charity shops now are a bit more pie-hot on what they’re selling and it’s only fair – why sell something for 10p when its value is £10 and you can get £10 for it?”

Mildred drove a hard bargain. “You had your regulars and it was surprising how many asked if I could give them something cheaper. ‘No, not really!’ I’d say. We all like a bargain but it’s not an antiques fair where you can barter; you don’t barter with people’s lives.”

She stopped volunteering when she retired but her support of the charity went on; Mildred helped at the Christmas bazaar for years and even completed an Ashton Court fundraising walk a few years ago. “It’s been a lot of fun and I’ve made marvellous friends. Often my friend Doreen and I, when we finished our morning stint in the shop, would visit the hospice shop in Clifton then treat ourselves to a pub lunch. We’ve had so much comradeship; we didn’t stop chatting and laughing unless we were drinking coffee or eating biscuits. And we knew we were helping to keep the hospice going.”

Previous
Super human: Giffords Circus back on the road